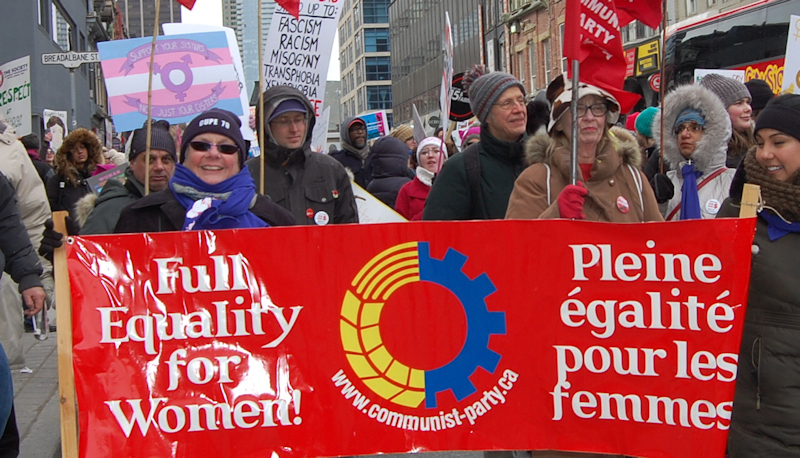 COVID-19 has stripped away the veneer of capitalism, leaving bare the stark inequalities based on gender, racialization and ability. According to the United Nations, women are the majority of workers in sectors of the economy most severely impacted by the pandemic shutdowns.

In Canada, women are losing employment at double the rate of men. Many women have had to leave jobs, or take fewer hours, to care for children and family members. Women are losing income without compensation for the added burden of working in their own home. Long-term effects include lost seniority, and interruption or sidetracking of opportunities for promotion. The loss of jobs, income and promotions will result in lower pensions, and once again older women will face long-term poverty.

Globally, women make up 70 percent of the health workforce, on the front lines of the pandemic response. Located within the health care, retail and service sectors, women employees face higher risk of infection and poor working conditions, which have gotten worse and will continue to do so. Those forced out of existing jobs find little opportunity for employment that isn’t precarious, part-time, temporary and low paid. Lauded as heroes, health care workers still have to struggle for adequate compensation and safe working conditions.

The situation is much worse for some. West Coast LEAF’s “COVID-19 Gender Equality Report Card” reports that a “survey of more than 200 migrant care workers in Canada found that more than a third lost their jobs during the pandemic (and also their housing, in the case of live-in workers). Of those who stayed employed, many were subjected to wage theft, extreme overwork and abusive restrictions on their personal freedoms. A survey of people with disabilities and long-term health conditions found that more than a third lost jobs or hours of work between February and April, and 61 percent were struggling to meet at least one essential need… Employment remained dramatically lower for Arab, Black and Southeast Asian people than for their white counterparts and declined for Indigenous people living off-reserve. Many sex workers have faced financial devastation as a result of the pandemic.”

Meanwhile, the systemic racism in Canada’s health system has also been exposed. Joyce Echaquan, an Indigenous (Atikamekw) woman died after recording the racism and abuse she experienced in hospital in Saint-Charles-Borromée, Quebec. The widespread systemic racism faced by Indigenous people in BC’s health system was chronicled in a report by Independent Reviewer, the Hon. Dr. M.E. Turpel-Lafond (Aki-Kwe).

Services for those fleeing domestic violence, already insufficient, are more difficult to find during COVID shut-downs. Transition houses across the country warn that victims are often staying in abusive situations, nervous about fleeing to a shelter for fear they will not be able to find housing later.

Struggles around these issues will continue into the future, as we fight to regain the positions that women held prior to the pandemic. But the pandemic also offers the chance to develop unity against the system which has been unable to protect us, our families and our future. Unity against this capitalist crisis can take us beyond “back to normal” by putting some real new gains on the table.

This is a fight that requires an organized and structured movement. It has been over two decades since the National Action Committee on the Status of Women (NAC) was effectively shut down by funding cuts from the Liberal government of Jean Chrétien. To carry the struggle for gender equality forward, we must rebuild a cross-Canada women’s organization, one that can unite feminists from Indigenous nations, English-speaking Canada, Quebec and Acadia around a program for radical change.

Patriarchy is intrinsically bound to capitalism. While overthrowing capitalism will not mechanically bring an end to patriarchy, the true liberation of women is only possible under socialism, a society that ends exploitation and oppression.

Unity around a People’s Recovery is the way to move forward.

Demand a People’s Recovery for women and gender oppressed people

Real Employment Insurance reform: Make EI non-contributory and expand it to include all workers including part-time workers and first-time job seekers – for the full duration of unemployment, at 90 percent of previous earnings or the average wage. Protect women’s right to EI maternity coverage; expand parental benefits to 52 weeks.

Raise incomes to a livable level: Increase the minimum wage to $23 across the country. Substantially increase pensions and drop the pension age to 60. Introduce a Guaranteed Annual Livable Income to replace and increase subsistence level social assistance.

Action against violence and discrimination: End all forms of violence against women and 2S/LGBTIQ people and provide adequate funding for crisis centres and transition houses. Legislate and enforce protections for sexual orientation and gender identity, gender expression and the bodily integrity of intersex people, and make ‘conversion’ therapy illegal. Fund equality-seeking women’s and 2S/LGBTIQ groups and introduce a decriminalization framework to protect the human and legal rights of sex workers.