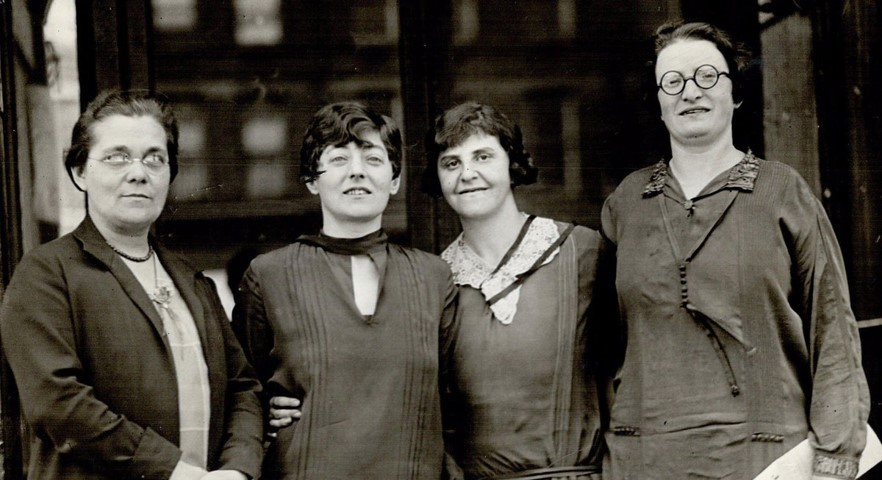 In 1917, International Women’s Day in Russia helped to launch the Russian Revolution, which ended up inspiring working people around the world. This included many working women in Canada, several of whom helped found and build the Communist Party of Canada.

For one hundred years, the Communist Party has been on the front lines in the fight for women’s full equality, which is an indispensable component of the revolutionary struggle for socialism. Party work over the decades has included campaigns for pay and employment equity, reproductive rights, voting and political rights for women, organizing women workers, childcare, maternity and parental benefits, combating poverty, opposing transphobia, ending violence against women and protecting the rights of sex workers.

Communist Party women played an instrumental role in establishing and leading the Congress of Canadian Women, affiliated to the Women’s International Democratic Federation. They also worked consistently to build and strengthen the National Action Committee on the Status of Women.

As part of our coverage of the Communist Party’s centenary, People’s Voice takes a look at some of the early Communist Party women who led the major struggles of their day and who continue to inspire the struggle for full gender equality and for socialism.

A former schoolteacher from England, Custance was one of the founders of the Communist Party of Canada (CPC). She has been described as “one of the original driving forces which helped to coordinate and bring about the communist movement in its earliest days”. When the CPC emerged from illegality in 1922 as the Workers Party, Custance was elected Secretary of its Women’s Bureau, a post she held for seven years. She also played key roles in the Canadian Friends of Soviet Russia, an organization dedicated to solidarity with the world’s first socialist country, and the Canadian Labour Defense League, which helped to organize against state repression of labour and communist activists. She was a delegate to the Fourth Congress of the Communist International in 1922 and was the founder and leader of the Women’s Labour League.

Annie Buller was a leading member of the CPC throughout the 1930s. She led a major strike for better pay and working conditions for dressmakers in Toronto’s garment trade, which was a sweatshop industry of mostly women workers.

Buller wrote about the strike years later. “The dressmakers could not persuade the officials of the International Ladies Garment Workers Union (then looked upon by the workers as a company union) to organize them and help abolish these frightful conditions. The so-called leaders’ reply was ‘you cannot organize women.’ This is eloquent proof of how little these reformist leaders understood the working class. In fact, they were much closer to the bosses.”

Buller visited the famous Estevan Coal Miners’ strike in 1931, addressing strikers at a rally. The following day the RCMP opened fire on a march of strikers, killing three workers. The Mounties targeted Buller as a “red” scapegoat and she was arrested on charges of inciting a riot. She defended herself at her trial with forcefulness and dignity. Before her conviction she famously said, “It is not ‘Annie Buller’ who is on trial here. It is the great class of producers that stands in the prisoners’ dock”. She spent a year in North Battleford Prison. When the CPC was made illegal in the early part of WWII, Buller was again arrested and jailed in Portage la Prairie from 1940-1942.

Buller ran for office several times. In 1932, she ran for a Toronto City Council position as a “Workers United Front” candidate and she ran as a Labor-Progressive Party candidate in 1952 and 1957 in Toronto. After WWII Annie Buller continued to be involved in CPC activities such as the campaigns to roll back prices organized by the National Women’s Commission and the Housewives Association. She traveled to the USSR in 1955 and remained active in the CPC until her retirement from Communist publication responsibilities in the late 1950s.

Buhay was also a member since the founding of the CPC. In the 1920s and 1930s she toured and lectured, teaching at Party schools in Western and Central Canada. In the early 1920s in Alberta, she helped organize striking coal miners’ wives in the Women’s Labour Leagues. With her friend Annie Buller, she was active in the “free speech” fights in Toronto in 1929-31 against Toronto police repression of communists, and she succeeded Florence Custance as Secretary of the Canadian Labour Defence League in 1929. She wrote and spoke about women’s role in the struggle for socialism and headed a Canadian women’s delegation to the USSR in 1930, where six women toured the new socialist country for three months. When the delegation returned, they were greeted by more than one thousand workers enthusiastic to hear about their report on witnessing socialist construction.

In the 30s and 40s, the CPC moved in and out of legality and its leaders faced imprisonment on two occasions. According to Buhay, communist women “led dramatic delegations and processions to Ottawa demanding release of imprisoned and interned leaders. During the thirties, their work was so effective that they played no small part in bringing about the downfall of the Bennett government”. She is remembered as an excellent teacher of radical ideas, a powerful orator and for her loyalty to the communist movement.

Dorise Nielsen was a feminist teacher and CPC member. She was the first member of the Communist Party of Canada to be elected to the House of Commons as well as the third woman elected to Canadian Parliament. Nielsen was the first woman MP to raise young children while holding political office. She won her seat in the 1940 Federal election representing the Saskatchewan riding of North Battleford on the “United Progressives” label, beating the Liberal candidate in a two-way race.

After the war, Nielsen fought to keep the childcare system established during WWII so women could work while the men went to war. In a speech in the House of Commons she said “the need for day nurseries was felt long before the war started and will continue to grow … Among the low-income groups, mothers have for a good many years been forced to work, and the need they have for care of their children has always been great.”

In 1957, she moved to revolutionary China to work at Foreign Languages Press where she lived until her death in 1980.

Léa Roback was a Communist Party member in Montreal, where she worked in the 1920s as a cashier at a theatre. She got to know some of the women working the sex trade near the theatre and described them as “nice girls, because in the 20s there’s not a whole lot of ways for a woman without an education to earn a living.”

Her politicization increased while traveling to Germany in 1929, where she joined protests against rising Nazism. She joined the Communist Party in Germany but returned to Canada in 1932 – Germany becoming increasingly dangerous for a Jewish communist.

Back in Montreal, Roback opened the city’s first Marxist bookstore, the Modern Book Shop, and became involved with the local women’s movement, fighting against poverty and campaigning for women’s voting rights (which were denied in Quebec until 1940).  She also worked on union organizing drives among women garment workers.

As a Jewish communist woman during the Grande Noirceur of Maurice Duplessis, Roback experienced numerous raids and other acts of harassment from the police and fascists in Quebec. Throughout her life, she campaigned against exclusion, violence, racism and injustice.

Jeanne Corbin joined the CPC in Edmonton at age 18. She initially worked as a teacher but was fired for introducing students to socialism.

Unable to return to teaching because the police had labelled her as a “red,” Corbin ran Edmonton’s Labor News Stand bookstore and organized unemployed women. She became secretary of the Canadian Labour Defense League in 1929, working to protect striking workers from police and legal attacks. She also worked for the Communist Party’s newspaper, The Worker.

In the 1930s, Corbin was a key part of Workers’ Unity League efforts to organize francophone workers in Montreal and, later, among logging camp workers in Quebec and Ontario. Part of this work involved editing the French labour newspaper, “L’Ouvrier canadien.”

Corbin faced constant police harassment and was arrested and imprisoned several times for her work in the labour movement. She died in 1944 at the age of 38.