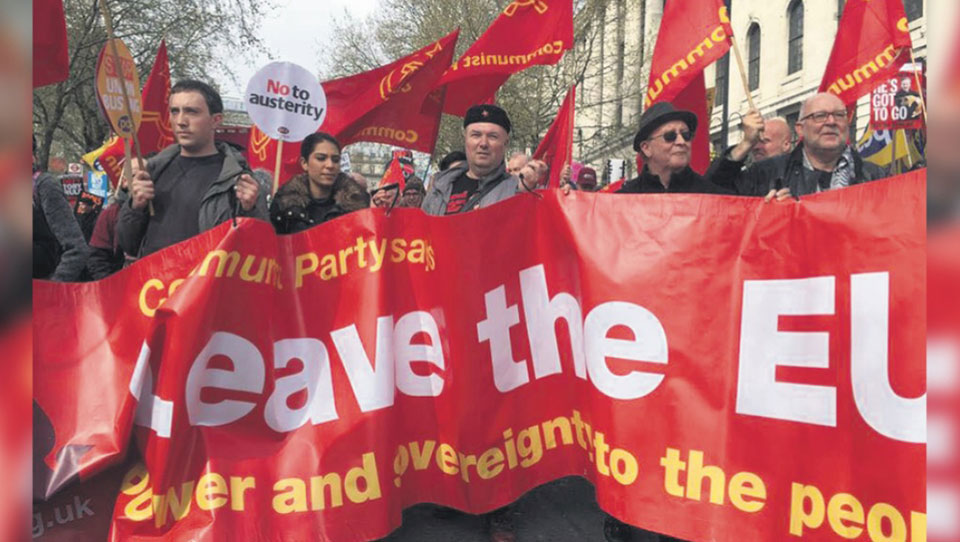 By Robert Griffiths and John Foster

The UK-EU trade agreement is a compromise between the interests of British state-monopoly capitalism on the one side and those of German and French monopoly capital – represented by their states and the EU – on the other.

The Communist Party of Britain has consistently pointed out that the big monopoly capitalists of Britain and the EU have sufficient interests in common to reach a deal, however unlikely the prospect at any particular time. But such an agreement was never intended by either side to benefit the working classes and peoples of England, Scotland, Wales or the other countries of Europe.

Under the new agreement (Title IV), capital will remain free to shut down operations and invest anywhere in Britain and Europe, regardless of job losses, regional inequalities and the requirements of balanced economic and social development. However, access rights for the City of London to Eurobond and other EU financial markets remain to be worked out in detail (Title II).

Importantly, in the case of public procurement contracts and compulsory competitive tendering, the agreement (Title VI) ratifies full operation of the WTO’s Government Procurement Agreement for public services. This means opening them up to full competition, with the EU and UK agreeing to extend such regulations mutually to gas and heat distribution, private utilities, telecoms, education and “other business sectors” across Britain and Europe.

On the capitalist free-market “level playing field” and competition law, the agreement (Title XI) commits both sides to maintain “the present high standards” including legal enforcement under their own sovereignty and through their own respective courts – with resort to the WTO and mutually agreed settlement procedures between Britain and the EU.

At the same time, the new agreement certainly improves on the terms set out by Theresa May’s Tory government which would have tied Britain – locked in by Northern Ireland arrangements – to the Customs Union, the Single Market rules under the jurisdiction of the anti-trade union European Court of Justice and to large general contributions to EU funds. The anti-Brexit scares about planes not flying, imports of food and vital medicines stopping, cooperation against terrorism coming to an end and the imposition of a hard border across Ireland have all proved baseless, as the Communist Party has declared they would.

Normal sovereignty has been secured for British state-monopoly capitalism – which is fundamentally different from democratic popular sovereignty for working people. The new agreement does not, for example, lawfully permit a future left government in Britain, Scotland or Wales to plan economic development and direct the policies of the big capitalist corporations.

Leaving the EU and its Customs Union fully on January 1, 2021 may make it easier in the long-run to achieve these objectives. Obviously, this is not what the Tory government has in mind. Instead, Johnson’s UK Single Market Act (2020) seizes economic and industrial powers from the devolved parliaments of Scotland and Wales, challenging the limited regional and national economic democracy won by their peoples over the past three decades.

The labour movement and its trades unions must now begin a united struggle for popular sovereignty at all levels in the face of a wider economic and social crisis that is already reaching unprecedented proportions – a crisis which Britain as currently subjected to “free market” big business sovereignty has proved woefully unable to control.

Big battles lie ahead in the fight for jobs, incomes and public services. Free trade agreements between Britain and other countries which include provisions for greater privatization of public services, or for incoming investors to overturn the democratic policies of the central and devolved parliaments, must be resisted.

Arising from the UK-EU deal, we also need to ensure that government spending on regional, social, scientific and agricultural support is maintained; that standards for workers, consumers and the environment are defended and extended; and that scores of policy-making powers repatriated from Brussels are devolved as promised to the Scottish and Welsh parliaments.

Robert Griffiths and John Foster are General Secretary and International Secretary of the Communist Party of Britain, respectively