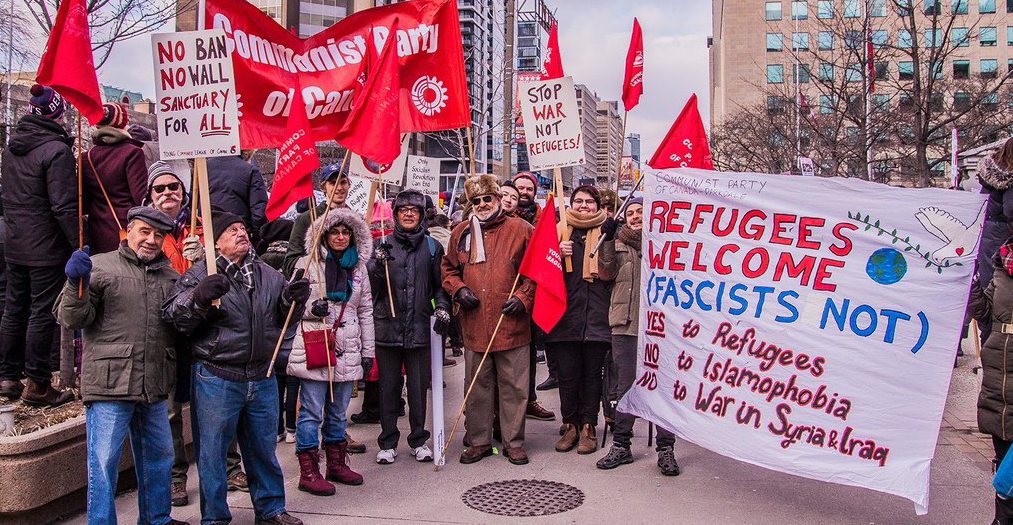 Four years after the Québec City mosque shooting, the Communist Party stresses that the fight against Islamophobia, xenophobia and systemic racism is still as relevant as ever and must be a priority for all progressive Québecers as well as for the labour, democratic and popular movements.

Four years after the murders, too many people still believe that this was an isolated, individual act without a social context. Yet, in recent years, the fascist extreme right has consolidated itself and represents an increasingly important threat in Québec and elsewhere in the world.

In Toronto, far-right polemicist Faith Goldy came third in the last mayoral election. In New Zealand, a young man inspired by the Québec mosque shooter and Marine Le Pen, among others, committed a copycat in Christchurch. In the United States, Trump supporters are forming white supremacist militias organized enough to storm the Capitol in a coup attempt.

Closer to home, François Legault – who refuses, despite the evidence, to acknowledge the existence of systemic racism – used closure to impose the truly Islamophobic Bill 21 [the ban on religious symbols] on Québec workers. Even before this law was proposed, François Legault and other members of the Coalition Avenir Québec had made statements that seduced activists from extreme right-wing groups such as La Meute.

These groups are becoming increasingly organized and Islamophobia is at the center of their ideological arsenal. They are infiltrating different sectors of society and, through the tabloid press and with the help of Donald Trump’s four-year presidency, their ideas are becoming more and more commonplace. Make no mistake. Conspiracy theorists are not just anti-maskers. Most of them have already been or are in the process of being won over to Islamophobia and racism.

Communists refuse to see the attack on the Québec mosque as a marginal action. From the massacre at the Bataclan in Paris to the one in Christchurch, it is the product of the ideological offensive of the ruling class. By refusing to recognize the extreme right for what it is, the Conservatives, Liberals, Social Democrats and even the Greens share responsibility for these massacres. By their complicit silence or open support for the imperialist wars in the Middle East and elsewhere, by their refusal to debate Canada’s immediate withdrawal from NATO, by their refusal to repatriate Canadian soldiers posted outside the country or to reduce the military budget, by their inability to condemn in the strongest terms and detach themselves from US foreign policy, yes, they have some of the blood of the victims of the mosque shooting on their hands.

To be clear, racism benefits the ruling class by dividing workers and undermining class solidarity. In the name of “civilization” and the struggle against a “retrograde and feudal religion,” it also justifies the ransacking, plunder, massacre and bombing of countries like Iraq, Libya and Syria. Through similar logic, Indigenous peoples have been dehumanized to justify genocide, the theft of their lands and the plundering of their resources. The same thinking also dehumanized Africans and Black people, to reduce them to a commodity to be purchased, and justified colonialism and its crimes. Today, these ideas are still at work and serve the very interests of imperialism in its quest for cheap and servile labour, roads and access to raw materials and natural resources to plunder, for outlets for its goods and to guarantee the greatest profit for the monopolies.

The struggle against racism and Islamophobia is also a struggle for international solidarity and against imperialism.