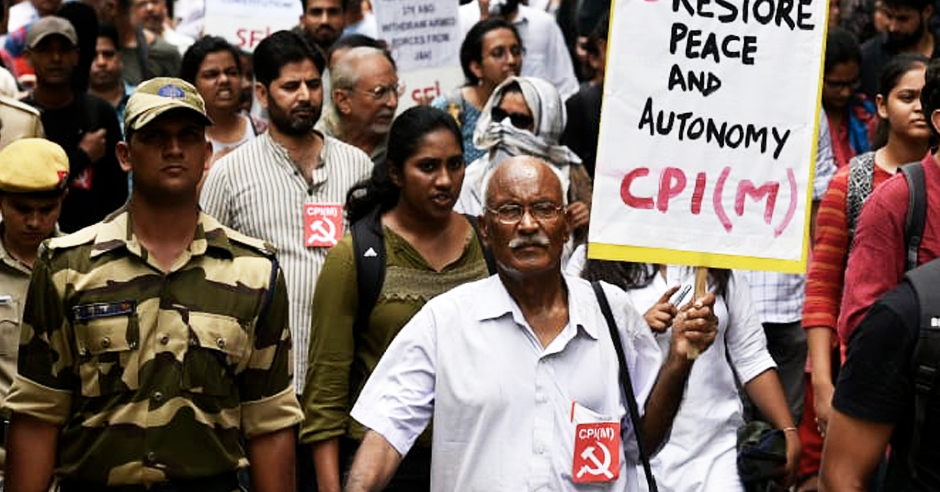 As one walks along the Hazratbal Road in Srinagar on a bright and shiny early winter morning, across the deserted shopping mohalla (neighbourhood) of the Kozirabal enclave and past the housing estates of Mirzabagh that show no activity, towards the Kashmir University with its gates drawn shut and not a soul in sight, one gets to touch the pebbled shores of the azure waters of the deep and wide Nigeen Lake which placidly reflects the clouds above piled high in the sky. The peace, the tranquility and the calm are a delusion.

The local and grim-faced Kashmiri youth soon gather around and tell us about the shooting that occurred deep into last night by the local units of the central security forces, leaving twelve young men and women lying dead and unattended. The wounded were left groaning on the streets now cordoned off by the Rashtriya Rifles – the US-trained, over-armed and over-armoured Indian version of the SWAT.

This was back in 2015, when Narendra Modi’s right-wing Hindutva government had been in office for less than a year. Even then, their intention toward Kashmir was clear enough. “We shall make Kashmir a proper part of the Hindu Rashtra (state) once-and-for-all, and we shall do whatever it takes to achieve our sacred lakhshya (aim),” screamed news channels run by the RSS-BJP (the far-right Rashtriya Swayamsevak Sangh movement and its ideological partner, Modi’s Bharatiya Janata Party).

Beyond pious (and thus harmless) statements of intent in protest, national political parties including the centre-right Indian National Congress (INC) did nothing. Nationwide demonstrations held by the Communist Party of India (Marxist) and other left parties were ignored by the national media.

In the meantime, the civilian death toll mounted. In one incident, desperate children in downtown Srinagar’s Safakdal district threw pebbles at a battalion of the dreaded Central Reserve Police Force in riot gear, who promptly let loose volleys of metal pellets from short-barreled shotguns, leaving scores wounded with blood streaming from their uncovered faces.

From October 26, 1947 (when Kashmir had joined the Indian union) until the present, close to 50,000 people in Kashmir have died at the hands of the Indian Army and other security forces. Twice that number have been kept incarcerated. To add to the Kashmiris’ woes, around a dozen have been killed every year since the 1980s by mercenaries (both indigenous and foreign-born) in violent Islamic extremist organizations.

The situation underwent a qualitative decline last year. As per the political program of the RSS-BJP, Kashmir’s special status under Article 370 of the Indian Constitution as the country’s only Muslim-majority state – a status maintained since the country’s independence – was abrogated in a decision that short-circuited India’s parliament. The government immediately clamped a state of emergency on Kashmir, via administrative orders and without legislative sanction.

Soon enough, battalion after battalion of the armed forces was deployed all over Kashmir and especially in Srinagar. Thousands of arrests started to be made each week and killings of civilians increased at a fearful rate. Every month, dozens upon dozens of “fake encounters” (in which security forces falsely claim to have encountered terrorists) were used as a justification for the deaths of hundreds of Kashmiri youth.

Radio, television, telephone and internet services were countermanded for months on end.  Every government and private institution and even some essential services were stopped. All elected bodies including the state legislature were prorogued. The entire political leadership of Kashmir was either straightaway incarcerated or confined to house arrest.

Hindutva proponents chortled with glee “now that these anti-nationals were being taught the proper sabak [lesson].” Regretfully, the slaughter of democracy and of the citizenry did not encourage either the Indian masses in general or the political parties and groups to come out onto the streets with the anger that the situation demanded. The CPI (M) did organize a series of demonstrations, marches, rallies and sit-ins at national, regional and local levels. However, in a vast country the size of India these actions were not quite successful in rousing the masses, especially as the movements were blocked out entirely by the media.

The forces of separation – who have their HQs across the Indian border and have the ear of at least one “superpower” across the seas – have taken full advantage of the ill-gotten developments in Kashmir by the forces of separation. The infiltration by squads of trained militants has increased manifold, and with them have come arms – semi-automatic firearms, mortars, sophisticated landmines, small calibre machine guns and several mobile field pieces. Violence has increased in a fearfully rising curve.

The RSS-BJP leadership gained the window of opportunity to speak about cross-border terrorism and the “Islamization of Kashmir” where “every youth is an indoctrinated anti-state, anti-constitution, anti-Indian terrorist.” As to proof or evidence of this? Since when have fascists had any use for honesty?

Pakistan recently gave a clarion call for an Azad (independent) Kashmir, while continuing to pump fighters, materials, arms and funds into the region. For the moment, the warring Islamic extremist outfits have forgotten their violent internecine conflicts – thus we have in present-day Kashmir multiple fractions of Islamic State cooperating with fragments of al-Qaeda, with both sponsoring the Pakistan-nurtured Jaish-e Muhammad, Lashkar-e Toiba, Hizb-ul Mujahideen and the locally-grown Jammu Kashmir Liberation Front and its splinter groups.

In terms of numbers, the Islamic outfits remain but a small fraction of the might of the Indian armed forces and security services, but these groups serve well the purpose of supplying the Modi regime with the right noises for escalating state terror.

The people of Kashmir stand shell-shocked at the rapidly changing political scenario, and the realization must have dawned on them by now that the worse is yet to come. Recently, a BJP-backed and widely circulated Indian newspaper, with editions in Urdu, English and Hindi, ran a story menacingly headlined, “We shall not allow an Islamist state within our borders.”