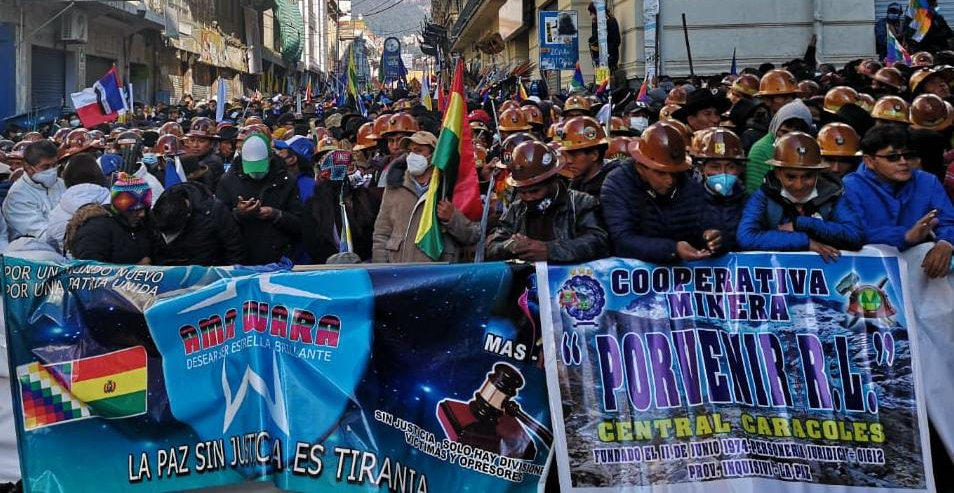 On November 8, Luis Arce of the Movement for Socialism (MAS) party will be sworn in as president of Bolivia. This outstanding victory is causing leftists around the world to look back with reverence on those who gave their lives protesting the military coup of October 2019, but also to look forward with concern at continuing right-wing violence in the country.

Authoritarians around Bolivia (particularly in whiter, more Catholic areas such as Santa Cruz, home of fascist candidate Luis Fernando Camacho) have been openly calling for a reversal of the election results. In late October, union leader Orlando Gutiérrez was murdered by a fascist gang and on November 5, President-elect Arce was attacked with dynamite at the MAS headquarters in La Paz.

Evo Morales’ return to Bolivia on November 9 will be another step toward symbolically repudiating the violence of the Áñez administration and its supporters, but the MAS government must take significant measures to ensure that the golpistas face justice and the voice of the majority is not once again cast aside in favour of the few.

Once in office, Luis Arce will need to undo the coup government’s foreign and domestic realignments and return Bolivia to the progressive, anti-imperialist policies which Evo Morales was elected to implement in 2019. This will be a considerable task. Jeanine Áñez, while ostensibly acting as a transitional president, attempted to completely overturn over a decade of MAS accomplishments. Under her aegis, Bolivia abandoned the Union of South American Nations (UNASAR) and the Caracas-based Bolivarian Alliance for the Peoples of Our America (ALBA), joined the neoliberal Lima Group, expelled Cuban doctors, fired 80 percent of MAS-appointed ambassadors and took out a US$327 million loan from the IMF after completely failing to contain the COVID-19 pandemic. Additionally, her armed forces attacked journalists, repeatedly committed acts of violence against MAS supporters and Indigenous people – in one instance, masked men abducted a small-town mayor, shaved her head and doused her in red paint – and authorized massacres of pro-democracy protestors in the cities of Sacaba and Senkata. It was only after the calling of a national strike – in which the late Orlando Gutiérrez played an important role – that the twice-postponed elections were allowed to take place, and MAS’s mandate was reaffirmed.

The Arce administration will be forced to contend with these violent right-wing forces in Santa Cruz and affluent areas in other cities. However, his party should not take the right’s vocal disdain as a reason to moderate their progressive, anti-imperialist principles. An Arce-led MAS government should accept their 25-point election win as a public sanction for the continuance of Morales-style policies, as well as a repudiation of the virulent racism and authoritarianism present in some aspects of Bolivian society.

There has been some worry within the international left that Arce will adopt a more moderate political position, in contrast to the former MAS leader. One reason for this belief is Arce’s personal presentation as a modest leftist technocrat. He does not attempt to portray himself as anything other than a “middle-class” economist and is thus notably less outspoken and charismatic than Evo Morales. Some are unsure if this quiet, unassuming man can be the visionary leader Bolivia needs in order to steer its way out of political and economic crisis while holding firm to progressive ideals.

Despite these concerns, Arce has taken steps to restore an anti-imperialist foreign policy by rebuilding relations with Iran, Cuba and Venezuela, and in a Reuters interview from October he reaffirmed his commitment to the ideas of Marx. His achievements as Minister of Economy and Public Finance are also undeniable, and he deserves a great deal of credit for the economic improvements that took place during Evo Morales’ tenure as president.

At the present moment, it is impossible to predict how Arce will manage Bolivia’s embattled economy and searing political rifts. The restoration of MAS power is a necessary step toward repairing the economic and human damage done by the far-right in the aftermath of the coup, but President Arce will need to adhere to a serious and uncompromising socialist vision if he wants to regain lost ground and expand MAS’s achievements even further.