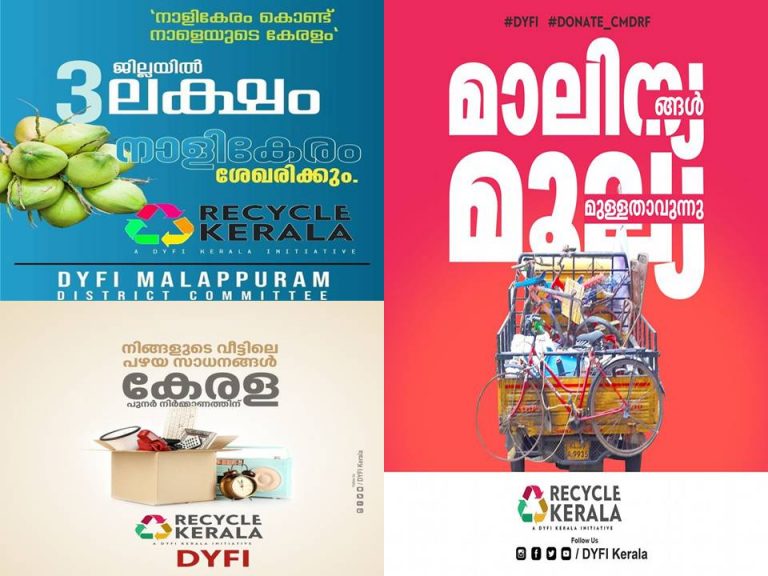 Since the start of the COVID-19 pandemic, leftist youth organizations across the world have been in the forefront of both providing relief and resisting attempts to attack people’s rights. In India, the ‘Recycle Kerala’ initiative launched by the communist Democratic Youth Federation of India (DYFI) raised over USD 1.4 million to help the state of Kerala’s fight against the pandemic.

Kerala’s left-wing government has stood out globally for its people-centric approach to combating coronavirus and won renown for successfully combating two waves of the pandemic. The youth organization’s initiative comes as the state deals with the third wave.

Unlike many other fundraising campaigns, Recycle Kerala involved the collection of used, secondary materials from households for recycling. The collected items were sold by DYFI to scrap dealers and recyclers. The proceeds were then combined and handed over to the state leadership.

From May, members of all 27,240 DYFI local units visited households and collected books, old newspapers, damaged electronic devices and other items. Some households also donated valuables such as paintings, sculptures and other artworks, thereby adding substantially to the collected funds.

Contributions also came in the form of farm and poultry products such as fruits, vegetables, poultry and dairy. Some small-scale farmers donated their entire produce of the season, including rice, tubers and plantains. In remote villages in Kerala, where farmers have found it difficult to sell their agricultural products due to the lockdown, DYFI committees purchased the produce and resold it. Other items donated were poultry, cattle, seeds of vegetables, saplings of flowers and high yield fruit plants, which were resold.

DYFI members sold fish which they caught from inland water bodies. Locally stitched and embroidered clothes, along with state run lottery tickets, were also sold in some places.

One major initiative was cleaning rivers across Kerala by removing an estimated 6.5 tons of plastic waste, including plastic bottles and other plastic waste, which was then sold for recycling. DYFI groups also cleaned private wells, factories, offices and houses, and contributed the income towards the initiative.

Several popular football players from the state who are part of the national, state and local teams donated their jerseys, which were then auctioned.

In a number of places, the DYFI ran small eateries and provided cheap local transport in areas where this was limited during the lockdown. Various artists who are members of DYFI conducted spot caricature drives and street concerts while adhering to COVID-19 safety protocols.

Along with all these efforts, DYFI members also joined the workforce at construction sites, farms and markets and contributed their earnings.

On August 7, in his official press meeting, Kerala Chief Minister Pinarayi Vijayan acknowledged and appreciated the initiative of DYFI as a model for the world to follow. “This initiative will be remembered as a hallmark of the valor of the youth in our state who are ready to fight for the common good, braving all adversities,” he said.