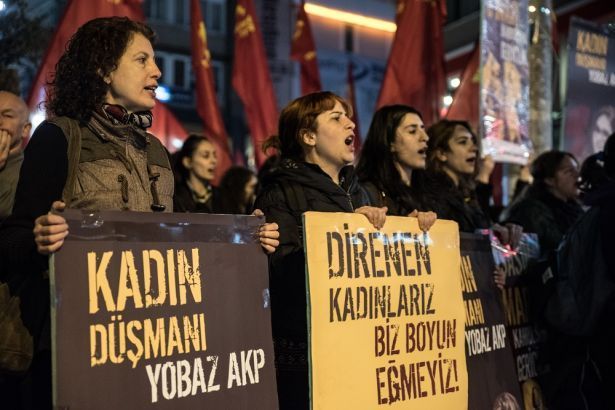 In 2012, the government of Turkey was the first to sign the Istanbul Convention, the Council of Europe agreement on preventing and combating violence against women and domestic violence. The convention obliges states to fully confront and take measures to prevent violence against women, including protecting those who experience it and prosecuting the perpetrators.

Gender violence is a growing crisis in Turkey. Last year 474 women were murdered, the highest number in a decade that has seen the rate of femicide rise. This year is expected to be even worse, partly exacerbated by the coronavirus pandemic and related economic crisis. Currently, the unemployment rate among women is over 45 percent.

The response of women’s and gender equity organizations to Erdogan’s announcement has been anger and mobilization. The country has seen multiple rallies in several cities, condemning the government’s policies and demanding real action against gender violence.

The Communist Party of Turkey (TKP) organized protests in the country’s three largest cities – Istanbul, Ankara and Izmir – and issued a statement noting the connection between gender violence and capitalism.

“We know very well that exploitation is the source of violence against women. We know that women will be exposed to different types of violence as long as this system of exploitation continues. Those who demand withdrawal from the Istanbul Convention are part of the cause of the continuing violence and their move is nothing more than the effort to hide their share in violence and femicides.

“Women will be saved from this oppression and violence only by their own organized power. For this reason, working women do not rely on politicians who try to trivialize secularism or on the statements of bosses who have an interest in the persistence of the weak position of women in society. Women only rely on their growing solidarity and organized power.”

The TKP is calling on working people “to organize in the ranks of communists to end violence against women, to establish a free and equal country for working women.”

[placards read “Bigoted AKP is the enemy of women” and “we are women who resist, we will not break”]