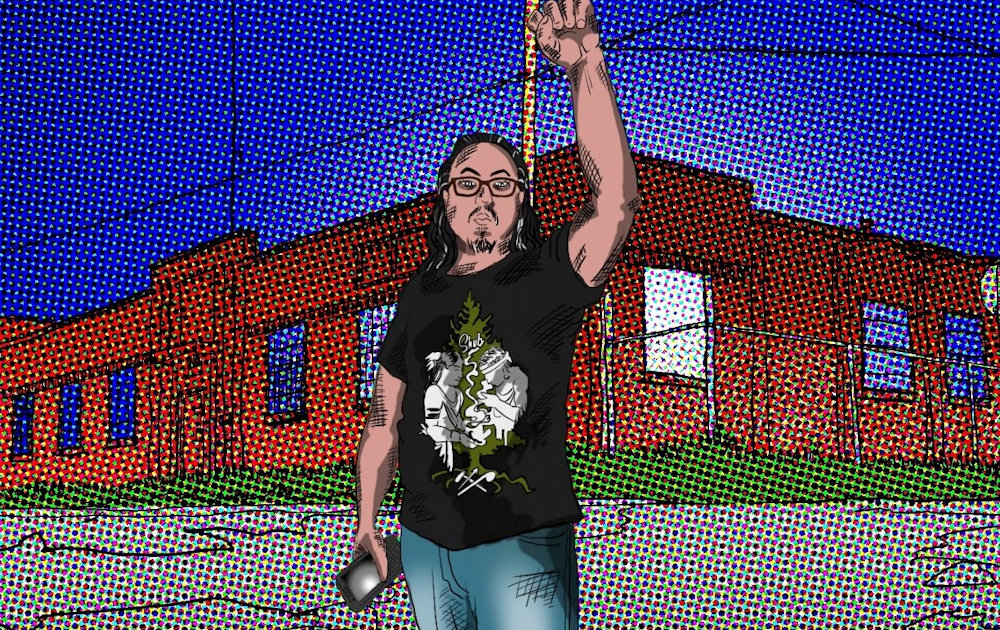 On September 2, Karl Dockstader from One Dish One Mic Indigenous media was arrested while covering the land defense at 1492 Land Back Lane near Caledonia, Ontario. People’s Voice editor Dave McKee spoke with Karl about that conflict, the struggle against colonialism and the criminalization of Indigenous media.

DM: Can you give an overview of what is happening at 1492 Land Back Lane? It’s a struggle that has received very little, if any, attention in mainstream media.

KD: It all really goes back to 1492, but this most recent land reclamation was initiated on July 19, when a group of Haudenosaunee land defenders saw that an intensive urban development was set to start the heavy construction phase of building homes on land that was a farm for the last century or so, and that for a thousand years before that was traditional hunting territory. There was supposed to have been a moratorium on the territories in the Haldimand Tract, because of the activity that happened in 2006 around the Kanonhstaton and Douglas Creek land reclamation. The federal government, the Crown, the provincial government and the County of Haldimand – the powers that be – are not interested in any way in giving land back to Indigenous people. So, they took land back. And in the words of land defender Skyler Williams, “We took this land back forever.”

This is not the first time there has been a land defence in the Caledonia area – you mentioned the 2006 struggle – are there specific issues/factors there that are contributing to a particularly sharpened conflict in that area?

Six Nations is bursting at the seams with young people and they have no place to go. They could move into the cities but because we’re supposed to have a nation-to-nation relationship with the Crown, they believe – as I believe – that the Crown should be acting in some way to help that community grow. The way that the laws are written, what was a problem in 2006 has become a problem again in 2020 – this endless urban sprawl and this constant growth of Western society is knocking right on the doorstep of the Six Nations people. And encasing them into their own territory and cutting off a lot of the natural ecosystems that support their territory. So that’s the first concern.

But the second overarching concern is that in 2009 the government walked away from the negotiating table. The Crown offered money to Six Nations, but the people of Six Nations don’t need money. Money is a tool that Western governments use; what the Six Nations people want is our birthright, and our birthright is to care for the land in perpetuity. That’s our responsibility. It’s something that will be made impossible if intensive urban development eliminates any area that Six Nations could grow to, that’s adjacent to where they are now.

This particular struggle is replicated in many places across Turtle Island, and will continue for a long time, until we actually have a process of decolonization and justice for Indigenous peoples.

I am careful not to lump them all land defense and land reclamation actions together. There are definitely shared Indigenous perspectives, but these are all distinct nations.

But to your question, I don’t see a pathway in the framework of how Canada operates now, for a resolution. Because the idea still has been, “Just give them money, just find some way to pacify Indigenous people.” Or, even worse, “Just ignore it until it’s a problem we’re confronted with and have to deal with.” And that seems to be the one common thread, that Canada has been unable to resolve the underlying disconnect between its philosophies and Indigenous philosophies. I think it’s fair to say that, until there’s some kind of paradigm shift in Western ideologies, there are going to be these types of conflicts.

Your arrest on September 2 seems to be part of an effort to criminalize Indigenous media and is eerily reminiscent of previous laws that prohibited Indigenous nations from hiring lawyers.

That’s what difficult here. I challenge a lot of Western institutions – there are parts of the court that just too overrun with systemic racism to really be able to salvage. And I hold similar views around the police – I’ve been public in criticizing the RCMP and OPP specifically. But there are other institutions, like the media, that I believe have a responsibility of holding power to account. I thought, “I’m going to be an Indigenous journalist who’s going to cover this story, and I’m going to provide the context.” I underestimated the willingness of the police to criminalize me and to charge me. I honestly thought there was very little risk to me going out and covering this story, that I would be arrested, and I surely made a wrong calculation.

And it does remind me of when Indigenous people were trying to get lawyers. It’s funny, because one of the underlying claims is, “Well, if only the people of 1492 Land Back Lane had come a century ago to claim this land, we wouldn’t be having all these problems.” But we couldn’t, because there was no pathway to get into court. So now the criticism being levied is, “Why do you have to burn tires and have these standoffs?” And it’s like, well, when a peaceful Indigenous reporter went out there 15 times, and then went to spend an entire week there to tell the story, you arrested him. So, what means are there? Every single doorway is closed for Indigenous people to tell our stories, whether it’s media or using the law or any other method. These doors keep being shut on us, and then they ask, “Why can’t we work this out in a good way?”

Your article from September 1 about law and order at 1492 Land Back Lane, which we republished, was an excellent examination of how this idea of the “rule of law” is used to constrict the struggle of Indigenous people.

What I was hoping to point out in that piece is that there are just such limited options. The law has never, historically, been a tool Indigenous people can use to liberate ourselves from the colonialism of Canada. Like, how could we use the tool of colonialism to liberate ourselves from colonialism? As the judge was speaking of “reconciliation” it was just cheapening the word, which has already died off in terms of validity in any of the grassroots communities I’ve seen, in any of the street-level stuff we do at the Friendship Centre and in any of the households where we break bread and sit around and talk about these things. So, for a judge to use that word while he’s telling a Haudenosaunee women that she didn’t follow some process or rule, and therefore she can’t speak in the court, it illustrates the hypocrisy of using the court system as a tool for our liberation. Again, it’s just another door closing.

This is the thirtieth anniversary of the very well known land defence at Oka. Thinking back to that, how have things developed – or not developed – since that action?

People call it the “Oka Crisis” or the “Oka Standoff” but I’m following the lead of Ellen Gabriel and other people from Kahnawà:ke, Kanehsatà:ke and that territory and I’m calling it the Siege of Kanehsatà:ke. This so-called just country called its army in to relieve the state police force, which had sieged the Mohawk people who were trying to protect their lands from a golf course and a condo development. It was the very graveyard where their ancestors were buried, the very territory where they had been hunting forever, and they were trying to stop the development. The state used every asset in its toolkit to try to forcibly remove Indigenous people from their territory.

So, what’s changed in 30 years? I don’t know – the territory still hasn’t been turned back over to the people of Kanehsatà:ke. It’s been bought and sold and put into some sort of weird state trust system that’s a park-like thing. What they’re doing in Ipperwash – it took 25 years for that territory to finally be returned.

This is a systems issue. Until we deal with the underlying issues, we’re just going to continue to potentially have these types of conflicts. It’s scary.

And it was after the Siege of Kanehsatà:ke that the very tragic events in Ipperwash happened.

Yes, and I always want to start this conversation by paying the utmost respect to the family of Dudley George. I want people from the family to know that I’m not hoping to politicize the tragedy of what happened, but that I think it’s important to try to tell the story of Dudley George and give it justice. As an Indigenous journalist, I feel I have the responsibility to Indigenous people to tell our stories with more care than they have historically been told.

The second thing I want to say is that this death was needless. Going back to the premier directing the police – his language was more forceful, but his tone was similar to the tone of the current Ontario premier. It’s clear that the police were rife with systemic racism.

But it’s also clear that there were no media present when the police did this. Journalists are being arrested right now and they’re being told where they can and can’t go with the Wet’suwet’en conflict. Justin Brake was arrested for following Indigenous land defenders at Muskrat Falls. The media is being restricted still, and there was no media present when Dudley George lost his life. I believe that, had media been present, that situation could have played out differently.

Yet here we are, twenty-five years later, and I am one of at least a couple if not more Indigenous journalists that have been arrested while covering 1492 Land Back Lane.

I think it’s important that people know it’s very easy to criminalize Indigenous people. The rates of crime in Indigenous communities are not at the same levels that Indigenous people are arrested, tried and incarcerated. Indigenous people make up about 5 percent of the population in Canada, but they occupy over 30 percent of the prison population. That’s criminalization. And further to that, almost half of the women in federal custody right now are Indigenous, and half of the youth in federal custody right now are Indigenous. These are hard and fast numbers that prove Indigenous people have been criminalized. And what this does is make it easier to arrest me, because I look exactly like the people doing the land defence. I’m Oneida and they’re Oneida – and they’re Mohawk and Tuscarora and Onondaga and Cayuga and Seneca – and to the predominately white OPP we look identical to the types of people they are frequently arresting and sending to the courts, the people the courts are frequently sending to custody, the people whose children are frequently taken away by child services.

Are we just waiting for the next person to die? Because that’s what the stakes seem like to me.

Read Karl Dockstader’s articles about the struggle at 1492 Land Back Lane at www.fenfc.org/1492.