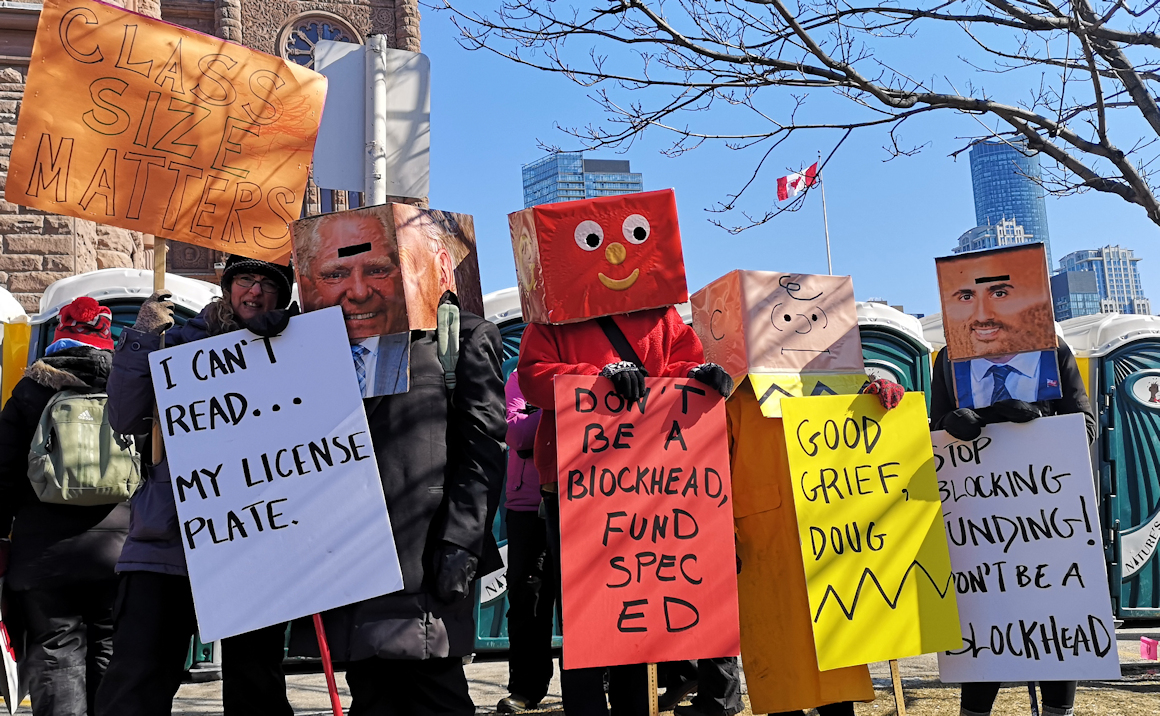 On August 17, Ontario Premier Doug Ford declared that the province’s teachers’ unions were “part of the problem” preventing implementation of his government’s plans for public schools.

In addition to the Ford’s current return-to-school-without-social-distancing-or-masks-or-safety-supplies plan, teachers’ unions have consistently been an obstacle to the Conservatives’ drive to gut public education. Last year, when the government imposed a 1 percent wage and benefit cap for the broader public sector and moved to increase class sizes, teachers’ unions launched a public education campaign that won mass solidarity from across the province – poll after poll consistently showed that over 60 percent of Ontarians opposed the government and supported the teachers.

When Ford and Co doubled down on their plan, which would have meant deteriorated classroom experience for students and decimated funding for boards, the unions went to the wall with a series of rotating strikes. In the end it was a global pandemic, not the government, that forced the unions to settle. Even then, they had already forced back most elements of the Conservative program.

Where we disagree with Doug Ford (apart from the entirety of his political agenda) is his view that teacher unions are the only “part of the problem” worth mentioning. In fact, there are several contributing problems to his education headache.

Students themselves emerged early on as a powerful opposition movement to the Conservative agenda. In September 2018, just 3 months after Ford’s election, over 40,000 high school students staged a walkout in nearly 130 communities across Ontario, protesting the government’s decision to replace the updated sex-ed curriculum with one from 1998, and to roll back the incorporation of Indigenous knowledge, teaching and history into the school system. They did this without funding, staff or a structured organization. It marked the birth of a new generation of activists, using a new generation of organizing tools, fighting for quality, accessible public education.

Then there are parents and community members, who understand the importance of public schools to children’s personal and social development, as well as to community health. And they showed that they are willing to fight for this by mobilizing provincially around public education and outreach, picket line support, school “walk-ins” and lobbying. Parent organizations also organized to pressure local school boards, encouraging trustees to not blindly accept the province’s directives.

And, of course, there are other unions. In the first place, tens of thousands of education workers – from assistants to administrative workers to custodial and maintenance staff – work alongside teachers each day, and their unions consistently fight alongside the teachers’ unions. They had their own struggle with the Ford plan, always standing up for a stronger public school system. Working conditions in schools, after all, are also students’ learning conditions.

The “problem” represented by teachers’ unions is not confined to Ontario or to public education. In communities across the country and in sectors throughout the economy, there are many examples of social unionism based on class struggle. It shows the power of labour unity and community-labour solidarity – to build and sustain a struggle despite three decades of neoliberalism, a pandemic and shut-down, and a deep economic crisis.

This Labour Day we salute teachers in Ontario and across the country, and workers and unions everywhere who insist on being “part of the problem.”