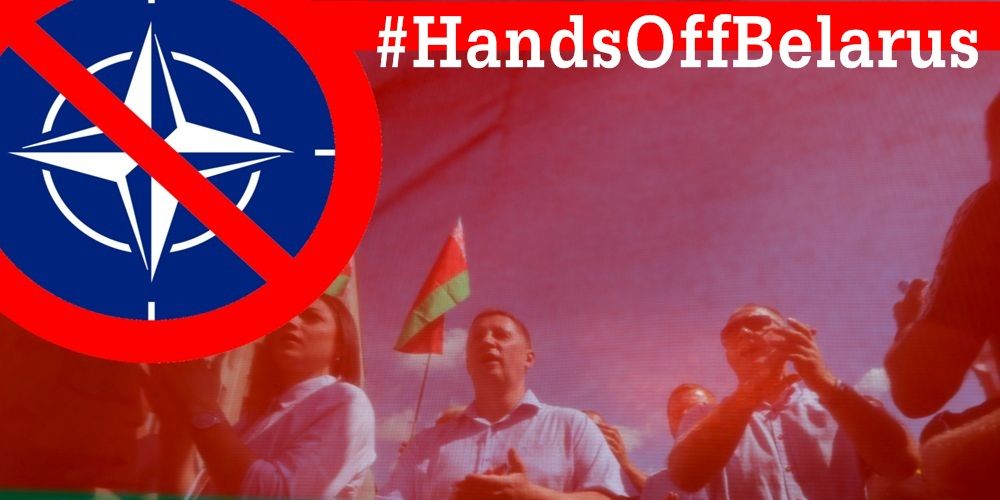 As People’s Voice goes to press, Western governments are escalating their threats to intervene in Belarus against the elected government of Alexander Lukashenko. In response, a growing number of voices around the world are warning of the dangers of intervention to the people of Belarus and of the region. Here, we reprint an analysis from the Party of Labour of Austria.

In the wake of the presidential election in Belarus, there has been over a week of escalating clashes and protests. The clearly defeated opposition accuses the government of electoral fraud, while the re-elected President Lukashenko considers himself to be in office legally. It is impossible for us to verify how the election process was conducted and how the votes were counted. The view propagated by the opposition candidate Tikhanovskaya, that she actually won with about 80 percent of the vote, is an assertion for which there are no clues or evidence. This version seems implausible, even if one has doubts about the official result. However, it was clear long before the vote that the opposition would not recognize the result in the event of defeat. This makes it obvious that this is a planned staging.

The protests on the streets of Minsk and other cities are real, but the EU media has deliberately concealed the fact that there are also large demonstrations in favour of Lukashenko. In fact, the government has considerable support among the Belarusian population, something that is linked to the country’s special path. Unlike Russia and the former socialist states of Eastern Europe, there was a milder form of counterrevolution and capitalist restoration here. The main industrial sectors, as well as relevant parts of agricultural production, are in state hands. This enables the government to provide a relatively high standard of social, educational and health services and a better standard of living than in neighbouring countries.

This does not mean that the political and economic regime should be glossed over, but this is precisely what has been a thorn in the side of the US and the EU for almost 30 years. Belarusian state capitalism prevents the unimpeded appropriation of former people’s and cooperative property by foreign monopoly capital, unobstructed and cheap access to the country’s resources and labour. Within the country no new oligarchic class has been able to emerge.

In this context, Russia plays a double role. Although it is in Russia’s interest to have a political ally and a buffer state to NATO in Belarus, Russian capital is also ultimately striving to expand its investment and profit opportunities. Limited Austrian imperialism also finds itself in a more complex situation with regard to Belarus – Austrian corporations, banks and insurance companies are doing good business in Belarus even under the current conditions, and these are certainly dependent on the current regime.

For the great imperialist powers, however, one thing is inevitably clear: in order to exploit Belarus to the maximum, the Lukashenko government must go. That is why the US, NATO and the EU have long been working on a new “colour revolution,” according to the Serbian, Ukrainian, Georgian, Central Asian, Latin American or Arab-spring model. They shamelessly use reactionary and fascist forces, and in the end, there shall be nothing but a coup that is covered up by a lot of noise and smoke about democracy, freedom and human rights.

But the “colour revolutions” have brought nothing to the people anywhere except chaos, exploitation, sell-out, dependency, in some cases terror and persecution, military aggression and civil war. They have also transformed those countries into a deployment area for NATO towards Russia, China, Iran or for the next colour coup in a neighbouring country.

So, it is no surprise that Ukraine, Poland and the Baltic countries in particular have become the mouthpieces of US and EU imperialism in relation to Belarus. It is not a coincidence that the protests are planned, directed, organized and legitimized from these countries. However, it is precisely these states – where there are massive problems with democracy and the rule of law, where communists, trade unionists and left activists are persecuted and murdered, where minority, women’s and LGBT rights are threatened, where right-wing extremism and neo-fascism are rampant – that have no political right or moral basis for any kind of arrogance towards Belarus.

The fact that the US and the EU are nevertheless succeeding in using a great amount of money, media propaganda, equipment and modern technology to manipulate a relevant section of the Belarussian population for their imperialist coup plans is, however, not to be overlooked. Even if it is mainly puppets of imperialism acting on the front line alongside contracted hooligans and neo-Nazis, it is obvious that many men and women are also taking to the streets because they really hope for improvements.

But they will be disappointed. They must be informed and enlightened about this, as far as possible, and organized for an independent and autonomous struggle for their real own interests.

Of course, a state-capitalist system cannot function in the long run, because it is a contradiction to the laws of capitalism – it tries to square the circle. The Belarusian system will not be able to survive due to external pressure, crises and the lack of possibilities for the people to develop and participate. But the solutions that imperialism and the opposition leaders are offering are tantamount to subordination to the US and EU, to increased exploitation and inequality, existential insecurity, privatization and social cuts – and ultimately to military conflicts.

Capitalism has no other offer, because it is not interested in the fate of the people. It does not care at all about democracy, human rights, security and wealth for all, but only about its profits, access to resources and transport routes, geopolitical positions and areas of influence, new military bases. These are the true perspectives of a successful “colour revolution” and regime change in Minsk.

We oppose any foreign interference in Belarusian affairs, whether by the US, NATO or EU, whether by Poland, Lithuania, Ukraine or the Czech Republic. The imperialist attempts to destabilize conditions, political and economic interventions, sanctions at the expense of the population, mendacious and hypocritical media campaigns and the incitement of the population must be rejected, as must the concrete efforts to stage a coup.

However, the interests of the Belarusian working class and people do not lie in perpetuating the current bourgeois-capitalist regime and its inadequate social and democratic conditions, but in the consistent revolutionary struggle for socialism. Only in this way it will be possible to escape imperialism as well as to meet the real needs of the people.