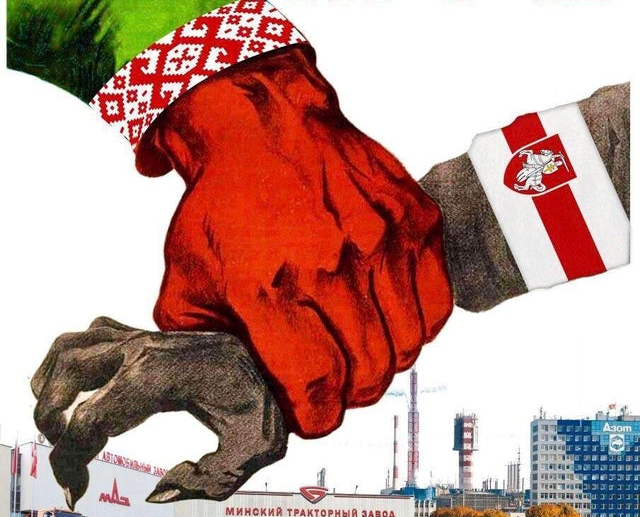 No foreign interference, no imperialist coup!

The Communist Party of Canada denounces the interference in the internal affairs of Belarus, by the United States, European Union and NATO countries. The Party calls on the Canadian government to immediately stop its involvement in the campaign to destabilize the country, and to normalize relations with the elected government of Alexander Lukashenko.

Official reports indicate that the presidential election held on August 9 was clearly won by Lukashenko, who was supported by many progressive forces including the Communist Party of Belarus. Opposition candidate Sviatlana Tsikhanouskaya received only 10 percent of the official vote yet has claimed victory and called for a transfer of power. Within hours of the election, Tsikhanouskaya met with US First Deputy Secretary of State Stephen Biegun and announced a “Coordination Council” to mobilize anti-government protests.

The election was observed by international monitors, and Sergei Lebedev of the Commonwealth of Independent States (CIS) described it as “legitimate” and “in accordance with the law, … competitive and public.”

Notably, the Organization for Security and Cooperation in Europe (OSCE) declined to send an observer mission. The OSCE has cited a number of contradictory reasons for not participating. It stated in July that it would not send observers because of the COVID-19 pandemic, then claimed that it was not invited (it was, by both Belarus and the CIS mission) and subsequently complained that the invitation was late (the election was announced in June).

The European Union, United States, Canada and Britain immediately declared the election fraudulent and said they would recognize Tsikanouskaya as the victor. All have cited the lack of OSCE participation as a major factor in their conclusion, although none has mentioned the OSCE’s flimsy excuses or offered any evidence to support their claim of fraud. Instead, they have resorted to repeating the mantra of Lukashenko as the “last dictator in Europe” and making references to “Soviet style” tactics.

On August 17, Canadian Foreign Affairs Minister François-Philippe Champagne issued a statement demanding new elections and “a thorough investigation to be conducted through the Organization for Security and Co-operation in Europe.” He also indicated that he has spoken personally with Tsikhanouskaya and assured her of the Canadian government’s support.

Amid the constant flow of condemnations, accusations and effective calls for “regime change,” one question is not being considered – why is Western imperialism currently so preoccupied with Belarus?

The current campaign of destabilization is rooted in a long history of opposition to Lukashenko and, more importantly, what he represents. Belarus is the only former Soviet republic that has not succumbed to the massive neoliberal campaigns of privatization, social program cutbacks and foreign domination of the economy that devastated the working classes of Eastern Europe following the overthrow of socialism in the early 1990s. While Belarus is no longer socialist, the country maintained a high level of state ownership over key industries and production, as well as many of the social gains from the socialist era. It has also retained a large degree of national sovereignty and independence, resisting ongoing pressure from the EU and NATO. This reality is the main reason for Lukashenko’s enduring popularity among the Belarussian people, even in the face of concessions to capitalism.

The United States escalated its aggression against Belarus with the 2004 Belarus Democracy Act, which provides funding to anti-government organizations and bans loans to the country. Alongside this, the National Endowment for Democracy (NED) has stepped up its funding for US-oriented, anti-government groups. The NED, founded by the Ronald Reagan administration in 1983, is financed by the US government and has been instrumental is nearly every US-backed regime change operation in the past 30 years. Last year, the NED had at least 34 NED project grants in Belarus, all dedicated to building anti-Lukashenko groups and networks within the country.

While Lukashenko represents a barrier to imperialist plans in Eastern Europe, Tsikanouskaya’s platform was a clear program for integration with EU and NATO imperialism. The opposition which she leads has called for a massive selloff of state-owned enterprises to foreign and private interests, commodification of land, privatization of housing and health and cutbacks to social programs. This is the same aggressive neoliberal program that was presented to Yugoslavia in 1999 in the form of the Rambouillet Accord, and which led to NATO’s ten-week bombing campaign when the government refused to implement it. It is also reminiscent of the factors behind the 2014 coup in Ukraine, when Western imperialist governments actively promoted anti-government demonstrations that included fascist forces, to drive the country into the EU-NATO fold and facilitate the further encirclement of Russia.

While mainstream media has focused exclusively on anti-government protests, it has ignored large demonstrations in support of Lukashenko – a dishonest narrative that has been opportunistically parroted by some labour and left-wing voices in the West. Public support for Lukashenko is so strong that it has forced anti-government forces to alter their demand from calling for immediate regime change to asking French President Emmanuel Macron to mediate a process leading to Lukashenko’s resignation.

As the US and EU ratchet up their interference and threat of intervention, the risk of violence and war increases dramatically. The imperialist aggression against Yugoslavia resulted in the widespread destruction of social and industrial infrastructure, the deaths of 2000 people and the displacement of 200,000 more. Interference in Ukraine by the US, EU and NATO produced violent and deadly pogroms against Russian-speaking Ukrainians, trade unions and left-wing political groups. It also provided training, material aid and political legitimacy to resurgent fascist movements in Ukraine.

We call on the Canadian government to respect the international legal principle of non-interference in the internal affairs of other states, by immediately ending its support for the US and EU-led campaign of destabilization and restoring full diplomatic and economic relations with Belarus and its democratically elected government.

The Communist Party also encourages trade unions, peace and progressive organizations in Canada to oppose foreign interference, including from Canada.