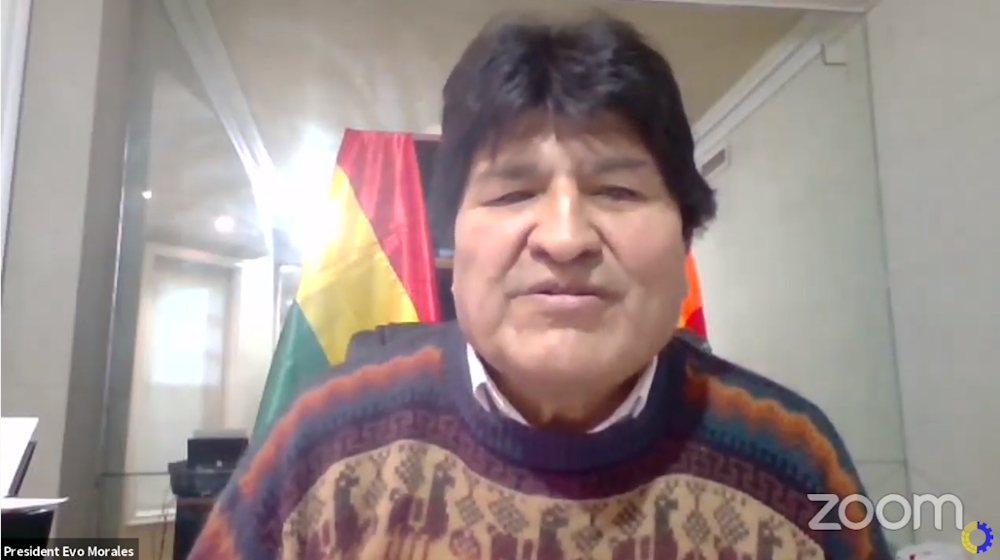 I want to talk to you a little bit about the Indigenous movement from Abiayala, also known as the Americas. It was on October 12, 1492 that we were thought of as being “discovered.” But it wasn’t a discovery, it was actually an invasion. They said they were bringing civilization; to that, we say it was not civilization, it was “syphilization.” They say it was a time to unite two different worlds – it was not to unite us; it was to take our natural resources. They saw us as savages, as animals, and what they wanted to do was to exterminate us.

The European invasion that came to our continent was to take our natural resources, with their politics of exterminating us. It was done through different programs that aimed at taking our identity, our culture and our traditions. They said that if we wanted to be part of modernity, we had to give up our own identities. But now we recognize that that is not the case – it is within diversity that we find richness and wealth and our dignity. I can give you examples of different countries like Ecuador, Mexico, Guatemala and Peru, where many of our people resisted. We still find Indigenous peoples living there – in Canada and the United States, Indigenous people continue to survive as well.

A few years back, we celebrated 500 years of resistance. It was all about resistance – our motto was, “From Resistance to Power.” How can we – Indigenous movements – take more power? Regardless of who we are, we all have the right to have political rights, and it is these political rights that we must recuperate. The invaders cannot continue to rule us forever. We need this movement because we need to gain political power. Colonialism is not only an external issue – it is a fight that is internal, and we must fight it. Imperialism says we cannot run our own country – using the pretext of independence from social movements, we are taught that we cannot take political power, that is their ideology. But we fight this. We were given communal rights, yes, but what we need are political rights because that is the only way we can take back our resources. They didn’t want us to nationalize our resources – with political power, we can. And that is why what happened not too long ago happened, and here we are today.

Cochabamba was one of the poorest places in Bolivia, and during the 1980s we started asking ourselves the following question: “Until when will we allow somebody from outside to govern over us? When will we start to make programs that are not imported, but that are born here? When will we be able to rule over ourselves?” And that is when we started this new liberation program. It was done for the people and by the people. And we started that movement – an electoral movement guided by our own values, by the values of our ancestors – to achieve internal and external decolonization. They called us terrorists. But I want to say that, according to the United States, all of the different social movements – the labour movement, Indigenous-led movements – have been called terrorist. Regardless of these accusations, even though I was called a drug trafficker, a terrorist, a communist – we won. Me, an Aymara, a Quechua person, called a drug trafficker and the “bin Laden of the Americas” – I won. And that is when the change began.

What we promoted was a democratic and cultural revolution. Our focus on the political side was the refounding of our nation. The economic aspect was to nationalize our strategic businesses. And the social aspect was the redistribution of wealth. It was all done through a constituent assembly, and that is why we created the plurinational state. We nationalized all our natural resources. Our hydrocarbons, our gas, were in the hands of different transnationals that had contracts in Bolivia and had decided that any resource coming out of the soil would belong to foreigners. Imagine – eighty-two percent of the profits would go towards these corporations and only eighteen percent would stay in Bolivia. And we said no to this. Whether the resources are inside of the soil or out, they are our resources, not theirs. And we decided that we would take the profit – if they wanted to be partners with us, that would be okay, but they would no longer be allowed to be the owners of our resources. So, we changed things – eighteen percent of the profits goes to them, and eighty-two percent stays with us.

On May 1, 2006, we nationalized and that is when we started seeing changes in the economy. After the first three years of our administration we became the fastest growing economy in Latin America for six consecutive years – we broke a record.

In regard to the social aspect, the redistribution of wealth was done through investment in different social programs. We didn’t want to follow capitalism because, according to capitalism, all the poor must save themselves. What we wanted to do was invest in social programs.

So, I wonder, “Why the coup?” And, by the way, thank you to all the Indigenous movements in Canada for sending your support. The coup was of white people against Indigenous people; and also because of the different economic model, and because of the lithium.

Some groups that represent the oligarchy have said, “We should dominate and rule over the Indigenous people.” But we showed them – we showed them how to rule a country. We showed them how to increase our economy, how to decrease inequality, how to decrease poverty. That was the result of our democratic and cultural revolution. They used to say that Bolivia was dying, if it was not to follow neoliberal strategies. But we, the Indigenous movements and social movements, along with others, showed them that a different Bolivia was possible, without need for the IMF. We were able to nationalize our natural resources, take back our raw materials.

It was after we started to industrialize around lithium that the coup came. A Republican senator in the US said, not too long ago, that the coup was supported by Donald Trump for the simple reason of lithium.

The Indigenous movements need to be recognized, but that is not the only thing that needs to happen. It’s not just about getting a little piece of land or getting some acknowledgement or getting a little bit of medication. We have to be political actors. It is important to define ourselves, to retake the struggles of our ancestors. We have to decide, are we for the people or are we imperialist? Are we for the poor, for the excluded, or for the rich? Are we socialists or are we capitalists? Some people say, “I am neutral” or “I am independent” but if you are silent or neutral during moments of oppression then you are siding with the oppressor. We have our ideology, we have our programs, we have our lived experience, and we need to understand that we need to be in harmony with Mother Earth. Either we save the planet, or we die. Because Mother Earth, or Pachamama, can exist without us but it cannot be the other way around.

So, brothers and sisters, we need to stand together. In the name of Bolivians, in the name of the Indigenous movements, thank you for supporting us during this difficult time. But you need to continue to stand with us – we need to secure the elections. The MAS-IPSP (Movement for Socialism–Political Instrument for the Sovereignty of the Peoples) will return to power, in the millions, and they will return dignity and freedom to Bolivia.

Excerpt from Evo Morales’ remarks to the “Indigenous Resistance to Militarism & Imperialism” webinar on June 21. Translated from Spanish by Ana Rugamas.