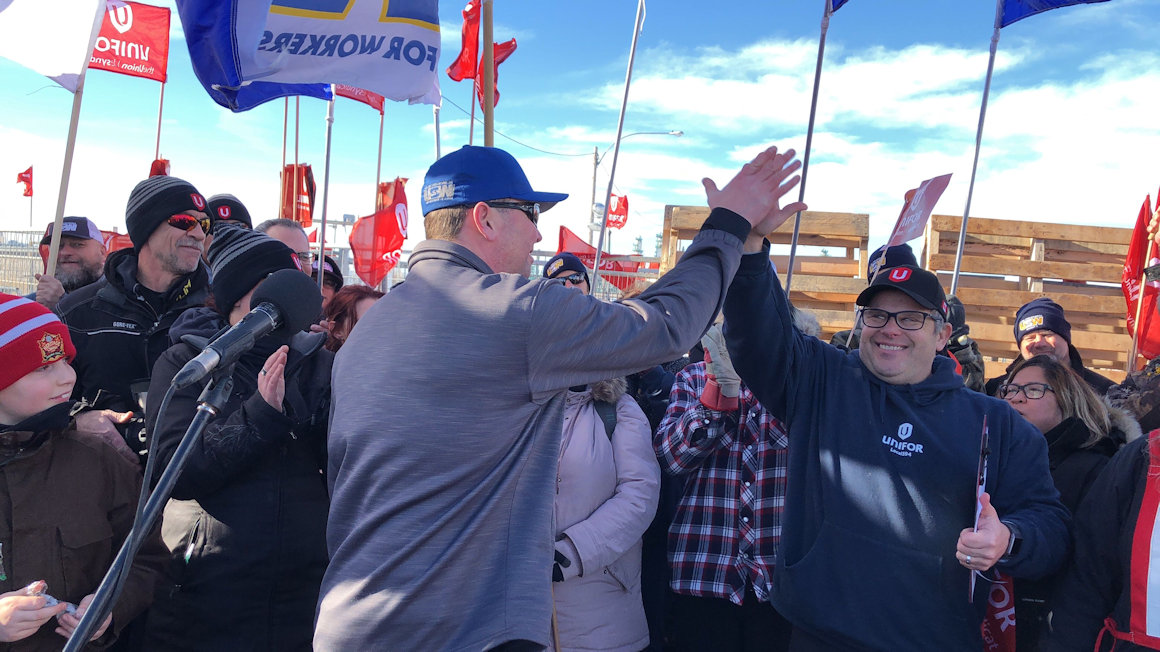 The bosses had scabs, police and a global health pandemic on their side, but workers at Federated Co-op Limited in Regina held out and won a big victory against the corporation’s union busting campaign. The 730 workers, members of Unifor Local 594, ratified a new contract on June 22, ending their 197-day lockout by the energy corporation. Their struggle attracted unity and solidarity from the labour movement across the country.

Speaking to People’s Voice, Local 594 President Kevin Bittman acknowledged that the COVID-19 pandemic had a big impact on the picket line. “All of a sudden, we had to bring people inside – we couldn’t be on the line, so the company had free access.” FCL aggressively had scabbed the refinery, at times using helicopters to bring in strike-breakers and maintaining what Bittman called a “scab-camp” for 1000 people.

Bittman also noted that it was more difficult to build and maintain solidarity among locked out workers when they couldn’t be together. But despite these challenges, he said, not one member crossed the picket line. “The membership knew exactly what was at stake, which was to keep our bargaining unit. In the end the corporation got a bit from us, but they got nothing for the future.”

During the lockout, FCL profits took a huge hit from the combination of reduced production and a collapse in global oil prices. The corporation was able to use the pandemic and resulting economic crisis to obscure these losses. There is suspicion that FCL may have even used the federal government’s Canadian Emergency Wage Subsidy (CEWS) to pay for scabs. Bittman said the union could not confirm that CEWS had been used but noted that FCL did conveniently reach the 70 percent threshold for revenue decline at around the same time the wage subsidy program was announced.

The struggle also helped shine a light on the role and nature of the police in a capitalist society. Regina Police intervened on more than one occasion on the side of the corporation, including breaking up the picket line and arresting 14 union members on January 20, and arresting another 4 peaceful picketers on February 5. This kind of aggression, which was fueled by and helped maintain the corporation’s intransigence, drew outrage from labour activists across Canada.

As FCL dug in and the lockout dragged on, Local 594 shifted its attention to the political level by calling on the Saskatchewan government to intervene and force the employer to negotiate. “Once it was clear that the company was not willing to go anywhere,” said Bittman, “we moved our lines to the legislature and maintained pickets from 6 in the morning till 6 at night, every day.” The union was able to exert massive pressure on the right-wing Saskatchewan Party government, and Bittman believes this was “the only reason the company came back to the bargaining table.”

As corporate media repeatedly downplays the importance of union organizing and working class struggles, the victory of Local 594 stands as a reminder that unity, solidarity and militancy are key to fighting and beating back the corporate agenda. As Bittman says, “Together, we took on Big Oil…and we won!”