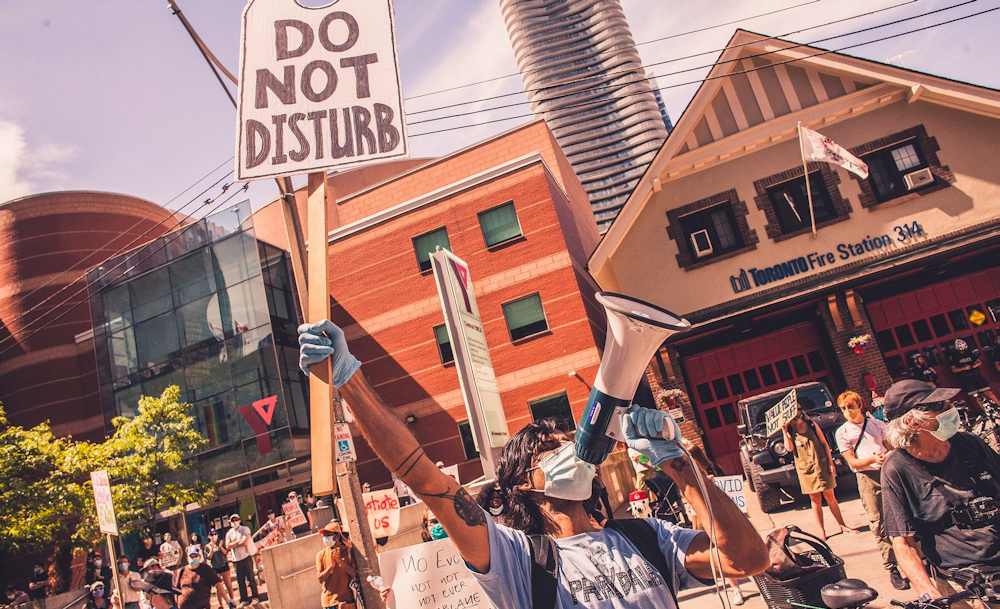 By Aliza Kassam and Alykhan Pabani

On June 9, tenants from across the Greater Toronto Area held a rally at Queen’s Park followed by a march to the Landlord and Tenant Board (LTB). Into their third month of a city-wide rent strike, organizers from diverse communities exchanged stories of struggle while reaffirming their shared resolve. Their demands are clear: permanently ban evictions for rent arrears accrued during COVID-19 and cancel all rent arrears accrued throughout the crisis.

Despite the Canada Emergency Relief Benefit (CERB) distributed by the federal government to compensate for loss of employment, tenants have been given barely enough to cover rent and many did not qualify at all. Tenants, who were already stretched thin before the pandemic due to decades of suppressed wages and neoliberal austerity, now face an impossible choice between paying for basic necessities and paying their landlord.

In an effort to assuage these concerns, Ontario Premier Doug Ford imposed a moratorium on all residential evictions in the province, stating that “if you have a choice between paying rent or putting food on your table, you’re putting food on your table. And the government of Ontario will make sure no one gets evicted.” While this move temporarily halts (some) displacement during the crisis, it merely defers the problem to a later date. Landlords are permitted to continue issuing N4 notices (notice to end a tenancy early for non-payment of rent) and so the backlog at the LTB grows by the day. Further, it is likely that tenants who are unaware of the moratorium (or the process of eviction) have already left their homes upon receiving such a notice.

The government’s true intentions were laid bare just before shutting down the legislature in mid-March, when one of their last actions was to introduce Bill 184. The ironically named Protecting Tenants and Strengthening Community Housing Act seeks to change portions of the Residential Tenancies Act, 2006 and will make it far easier for landlords to evict tenants. It has now passed second reading and is expected to become law.

Of particular concern in Bill 184 are the new rules pertaining to repayment agreements. When a tenant is brought to the LTB for non-payment of rent, they can enter into such an agreement as a way to avoid eviction. Under the proposed changes, if there is a breach by the tenant, landlords could then proceed to an eviction immediately, without bringing the tenant back to the LTB. Currently, the landlord is required to apply for another hearing. Rent strikers at the June 9 rally highlighted the dangers and fundamental injustice of forcing tenants to sign-on to these schemes. Even if already-struggling tenants are somehow able to scrap together an additional amount on top of their rent, they are being compelled to settle a debt incurred through no fault of their own.

Another problematic aspect of the bill pertains to the ability of tenants to mount a defence during an eviction hearing. Currently, tenants are able to cite landlord negligence, such as chronic disrepair or infestation, as mitigating factors in the mediation process. Changes proposed by Bill 184 would oblige tenants to provide advance written notice to the landlord that they intend to raise these issues at the hearing. While this may seem reasonable, it creates a barrier that erodes renters’ rights in the interest of efficiency. Tenants who have not kept abreast of these changes will lose access to this recourse. Landlords often intentionally ensure communications with tenants regarding maintenance are held verbally — if at all — to avoid accountability. Beyond cost-cutting, landlords are further incentivized to allow their buildings to deteriorate, as this can be used as justification for “renovictions” – eviction due to the necessity for major renovations. Rent strikers at the rally discussed the poor conditions of their buildings and units, citing severe health and safety violations, and described their frustrated attempts to resolve their grievances.

Due to vacancy decontrol, landlords can reset the rent at whatever the market will bear once a tenant vacates a unit. This creates a situation where massive profiteering is driving the displacement of marginalized, long-term tenants paying well below market value. The ubiquity of such a confrontational dynamic, in the context of ever-rising rents, has led to a business model in which speculators are more attracted to ‘de-tenanted’ properties, even if vacated tenants were paying market value.

The power imbalance has only increased in intensity since the onset of COVID-19. Tenants of large landlords, such as MetCap Living, have witnessed baton-wielding private security guards patrolling their buildings. It is not lost on rent strikers that landlords are using the proceeds of tenant displacement to put a chill on organizing efforts against that very displacement. Moreover, devastating cuts to Legal Aid Ontario in 2019 have hampered tenants’ ability to evaluate their rights and legal options.

It is also important to note that, as landlords are currently feigning hardship, the reproduction and accumulation of capital in this highly lucrative industry continues unabated. CAPREIT, one of Canada’s largest Real Estate Investment Trusts (REIT), has announced an investment of $153 million to buy out eleven operating leases in the GTA. CEO Mark Kenney stated that the COVID-19 pandemic has actually made this transaction timelier. REITs control the vast majority of rental units in Canada – contrary to the narrative peddled by the media of ‘mom-and-pop’ landlords (renting a portion of their residence without owning additional real estate property), who actually control less than 6 percent of rental housing.

Disturbingly, some of these landlords also have their hands in long-term care.  At the June 9 rally, rent strikers from Goodwood Park and Fountainhead Road brought attention to the fact that their landlord, Ben Friedman, is the president of Rykka Care Centres. Due to lack of rigorous protocols during the pandemic, there have been over 115 COVID-related deaths in three of its private, long-term care facilities (Anson Place, Eatonville Place and Hawthorne Place). Despite being widely exposed for their egregious practices, Rykka is currently in the process of taking over the non-profit Rose of Sharon Korean Long-Term Care home in Toronto. Upon approval of the licence, residents’ safety will be jeopardized – all while, profits continue to grow for Mr. Friedman and company.

Despite empty reassurances by capitalists and their representatives in government, tenants understand that organizing is the only way to protect themselves. With the interests of endless profit-seeking fundamentally at odds with working class people’s dignity and basic human rights, the strength of the bonds formed between neighbours will ultimately determine the outcome of the inevitable clash that is coming.

The authors are both rent strikers in Toronto