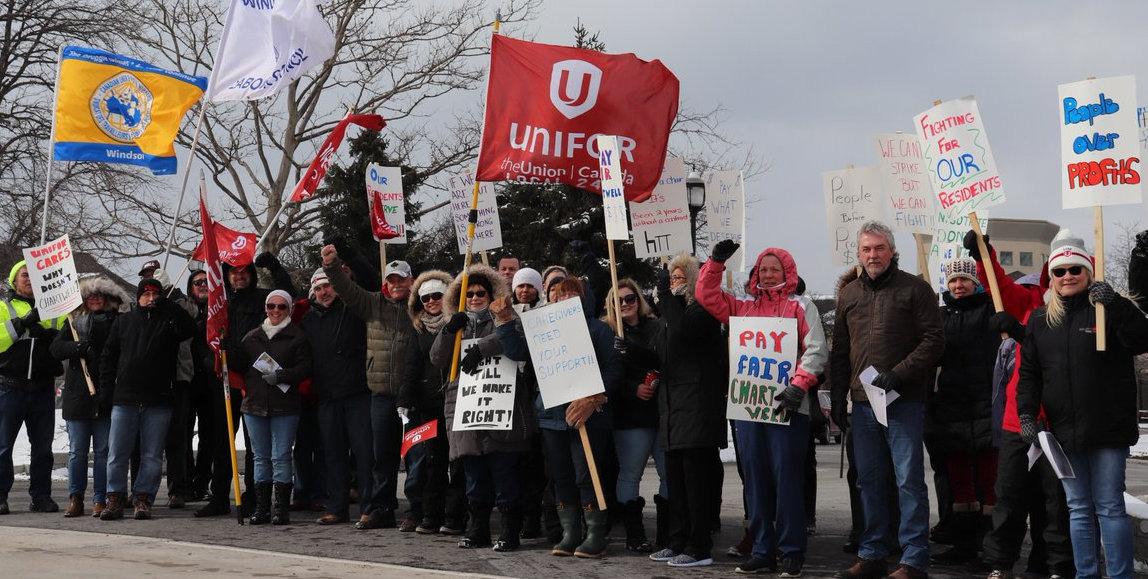 The following remarks were presented by Helen Kennedy, on behalf of the Communist Party of Canada (Ontario), to the Ontario government’s committee hearings on Bill 175, Connecting People to Home and Community Care Act, on June 15.

In 2015, the Ministry of Health and Long-term Care estimated there were about 100,000 Personal Support Workers (PSWs) across the province, with about a third working in homecare. A 2015 survey of PSWs in Ontario by researchers at McMaster University found that 94 percent were women, 69 percent were aged 45 or older, and 41 percent were not born in Canada. In urban centres like Toronto, Ottawa and Hamilton, PSWs are predominantly racialized women. They are the lowest paid workers in the healthcare sector, many working at less than minimum wage when travel time costs are factored into their wage packets. Sixty-two percent of PSWs in home and community care are currently employed part-time. According to Home Care Ontario, PSWs provide 74 percent of the care in the sector.

Currently, only 32 percent of PSWs in the home and community care sector are unionized, a sharp drop from 1995 when the conservative government of Mike Harris restructured health care in order to maximize profits for private healthcare companies at the expense of predominantly racialized women. Contracts that were held by non-profit agencies like the Red Cross and Victoria Order of Nurses (VON) were outbid by for-profit corporations who slashed labour costs by undercutting unionized contracts. The then Tory government also eliminated successor rights, so that those women who were unionized and receiving decent union wages and benefits lost their jobs and those that were hired in their place had their wages slashed and their benefits eliminated. Today, for-profit corporations provide over 65 percent of home care personal support services compared to 18 percent in 1995. This has been the deliberate policy of all provincial governments since Harris – reducing home and community care standards to the lowest common denominator.

I worked in one of the poorest neighbourhoods in Toronto for over thirty years. In this community, and many others like it across the city, a large percentage of women work as PSWs. They are predominantly black and racialized women. They live in social housing and low rent apartments because that’s all they can afford on a PSW wage. They fight for their children in the public education system to ensure they are not streamed into basic classes. They fight for their children who are policed in school hallways, who are stopped multiple times within their neighbourhoods and their local malls by the police. These women may work for two or three different home care agencies in order to make enough money to pay the rent and feed their families, and often work over twelve hours a day. These women are the face of systemic racism in our province. It is time to make amends, to address the fact that PSWs are essential to the health and community care sector and to demand that they are paid decent wages and benefits, that they be given full-time jobs, vacations and sick days.  This is not possible under a for-profit model presented in Bill 175, nor in the current system of home and community care.

We have seen the impact that for-profit care has had during the COVID-19 pandemic – if you were unfortunate to be in a private care home, you were four times more likely to get infected and die than if you were in a municipal home. It is ludicrous that the provincial government is proposing the further deregulation of home and community care, given the track record of these private homes during the pandemic. For-profit corporations take money out of the sector and put it into the pockets of their shareholders and executives. Former Premier Mike Harris has profited from his part-time job as the Chair of the Board with Chartwell. He was paid $229,500 for this job in 2019. The Toronto Star reported that “Harris had more than $7 million in Chartwell holdings at the end of 2019 (its last fiscal year) – including $4.29 million in ‘deferred trust units’ (akin to shares) that reflect his accumulated compensation over the years (deferred until retirement).” These earnings are accruing because he and his government restructured the long-term care sector to provide opportunities for the private businesses to make money from providing sub-standard care – paying workers less, providing fewer supports, fewer hours of care and even rationing incontinent supplies for residents. The current government has continued these practices and should be ashamed. More importantly, they should urgently reverse course.

I listened to these hearings yesterday and heard that some members of this committee believe that this bill does not further the privatization of home and community care. We disagree. This bill entrenches the unaccountable and private sector infested model of oversight called Ontario Health. This new super agency has a board that is populated by many of the for-profit lobby groups that have influenced elder care policy since Mike Harris was first elected in 1995. The 14 Local Health Integration Networks will be replaced with newly formed Ontario Health Teams which again will be overly represented by the for-profit agencies. Neither Ontario Health nor Ontario Health Teams have accountability to the public. The OHTs will be the ones transferring care coordination functions to provider companies that are also predominantly for-profit chains. Which companies do you think they’ll choose for these contracts? Private, for-profit homecare agencies will be the big winners in the Bill 175 lottery.

If this bill is enacted, the big losers will, once again, be the most vulnerable. There is already a huge waiting list for homecare, and the ongoing problem of missed visits, which directly impact care. Elderly clientele will be the recipient of fewer services with little or no recourse for missed visits. The workers in the sector, mostly PSWs – whose wages are already the lowest in the sector – will be maintained in low hourly-waged work, without compensation for travel time between clients, pushing them further into the gig economy that has failed workers so dramatically during the current pandemic.

The Communist Party of Canada (Ontario) demands that the provincial government withdraw this bill and begin a process to bring all home and community care agencies back into the public sector. Take the profit that is currently lining the pockets of lobbyists, former premiers and the 1% and invest it in public healthcare where it belongs. We demand quality care for seniors, dignity of care for people with disabilities, and decent wages, benefits and working conditions for all home and community care workers.