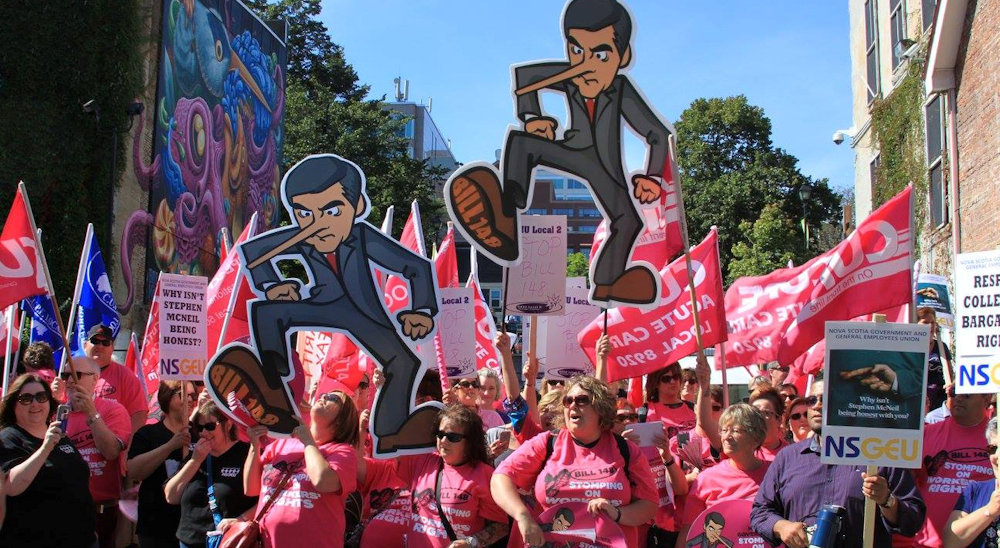 The COVID-19 crisis is an absolute disaster for women in so many ways—work, income, personal safety, family life.

Thanks to Premier Stephen McNeil, construction in Nova Scotia has not slowed one iota since the pandemic was declared. No one worries about men on construction sites social-distancing, hand-sanitizing or wearing masks. Thousands of men have kept their construction jobs; women did as well, but they represent a mere 4 percent of the construction trade workforce.

Overall, during the pandemic, men have kept working in construction, trucking, factory production, warehousing and more, but women – whose jobs are overwhelmingly in the service, hospitality and retail sectors – have not.

April’s statistics revealed that 80 percent of job losses due to COVID-19 were women, since the service sector has been all but shuttered during the crisis. Many of the jobs they lost are permanent. Among the service jobs that do re-open, the laid-off women will be competing for those jobs with all the unemployed women and men in the “reserve army of labour”.

According to Canadian Centre for Policy Alternative (CCPA) senior economist David Macdonald, “The breakdown by hourly wage is the most shocking of all. Half of all those earning $14 an hour or less have been laid off or have lost all their hours. This compares to only one per cent of jobs lost or hours cut among the highest earning 10 percent of workers who make more than $48 an hour.”

In April, the unemployment rate overall was 13 percent; the last time unemployment was this high was in 1982. Prior to that, we’d have to jump back to 1936 – to the middle of the Great Depression — to see unemployment this high. As the CCPA’s Macdonald puts it, “All jobs created since October 2005, 15 years ago, have been lost by April 2020.”

Women have had to bear the burden of the COVID-19 crisis, in two ways. First, the vast majority of the thousands of victims have been residents of long-term care homes, of whom women form the overwhelming majority because they live an average of 5 years longer than men. The 53 residents who died at Northwood LTC facility in Halifax account for 90% of COVID deaths in Nova Scotia.

Citing “privacy concerns” Northwood has not released a breakdown of who has died there; in fact, the CEO and the premier are keeping a tight lid on the whole situation. While Northwood has seen 342 cases of COVID-19 – involving 244 residents and 98 employees – McNeil categorically rejects the demand for a public inquiry and only offers the public a chance to be “part of a discussion.”

A second burden women face is the dangers inherent in their work as carers. For example, of the 400-plus people employed at Northwood – nurses, personal care workers, food service staff and cleaners – the overwhelming majority are women. Many are African-Nova Scotian, and many are from other racialized communities.  These women – who earn $17 to $21 an hour –worked for weeks without proper protective equipment and spent long shifts helping and comforting ill patients. For months, deaths from COVID kept mounting at Northwood, but neither the Premier nor the Chief Medical Officer of Health has adequately addressed the situation or made it safer for the care staff, who must return to their families after their shifts.

In early May, Premier McNeil grudgingly announced a “pandemic bonus” for long-term care workers. They will get an extra $2,000 ($500 a month) if they work steadily in long-term care from March to July.

While the bonus covers nursing home workers, it does not cover those who work as essential staff in residential care (known as “Small Options Homes”) in the province. This has angered Louise Riley, head of the Canadian Union of Public Employees’ (CUPE’s) Long-Term Care Committee. “We would like to see … a living wage every day … If you can do it in a pandemic you should be able to do it all the time. Make it a meaningful change.”

The federal government contributed 85 percent of the bonus funds and the rest came from the province. Other provinces, such as Ontario and Quebec, offered extra pay to their frontline workers nearly three weeks before McNeil made the announcement for Nova Scotia.

Food retail giant Sobey’s, headquartered in Nova Scotia, offered their employees a bonus called the “Hero Pay Program.” Rather than increasing the hourly rate to accurately reflect workers’ overtime and extended hours—the company has offered its cashiers, shelf-stockers and in-store cleaners a $50 weekly bonus during the crisis.

Atlantic Superstores and Shoppers Drug Mart are raising employees’ pay by $2.00 an hour — a 14% wage hike for most grocery and drug store workers. Sobey’s, Superstore and Shoppers are unionized in Cape Breton; one wonders what the unions think of the raise, since most would give their eyeteeth to to negotiate a 14% raise at any time.

However, even with the pay raise very few grocery store workers come close to earning a living wage, which in Halifax is $19.17 an hour.

The return to work for women raises questions about adequate provision for childcare. Many women are single parents – according to Statistics Canada, 81 percent of single parent households are headed by women – and of these, 78 percent work full-time. They need childcare.

With daycare centres and schools remaining closed, and municipalities cancelling free or cheap summer camps in July and August, what is a mother to do? Canadian economist Armine Yalnizyan insists, “You’re not going to have a recovery without childcare, it’s that simple.”

Echoing the United Nations view, Yalnizyan states that the pandemic is “deepening pre-existing inequalities, exposing vulnerabilities in social, political and economic systems, which are in turn amplifying the impacts of the pandemic. As women take on greater care demands at home, their jobs will also be disproportionately affected by cuts and lay-offs. Such impacts risk rolling back the already fragile gains made in female labor force participation, limiting women’s ability to support themselves and their families, especially for female-headed households.”

Recent news reports a Halifax veterinarian’s childcare dilemma help expose the depth of this problem. Daycare costs for her three-year-old jumped from $800 to more than $2200 a month, after her daycare centre closed and she had to hire a personal babysitter. (Nova Scotia’s minimum wage is $12.55 per hour, so a babysitter paid $13.00 per hour, 8 hours per day for 21 days each month, costs just under $2,200.00.) While a veterinarian is likely a high income earner, no one working for $20 an hour can afford that. Nova Scotia is the only province in which the government did not organize or provide childcare for essential service workers during the pandemic.

If daycare centres do open in the second week of June, as the premier suggests, then daycare workers – 90 percent of whom are women who earn as little as $14 an hour — will be considered essential workers. Even so, they who do not have sick benefits or the ability to self-isolate if they come into contact with a child or parent who has COVID. Who will care for the caregivers’ health and the health of their families? In the words of one childcare worker, “I fear that we’re going to make the same mistake that was made in nursing homes, and it’s going to lead to the spread of infections, then we have to shut down again…”

Women are also particularly impacted by the lack of rent relief in Nova Scotia. With reduced hours and precarious jobs, women earn less and tend to be tenants. While the provincial government has forbidden residential evictions during the current crisis, this only applies if the tenant’s refusal to pay rent is caused by job loss due to COVID-19. Nova Scotia does not provide tenants with assistance like British Columbia, which provides its residents with monthly rent subsidies of up to $500 during this crisis. This means that, at the end of the pandemic, many women will owe literally thousands of dollars in rent and will have to figure out a way to pay it back.

Judy Haiven is a retired professor of management at St Mary’s University, Halifax NS. She is on the steering committee of Equity Watch NS, an organisation dedicated to fighting bullying, discrimination and harassment at work. Contact her at equitywatchns@gmail.com.