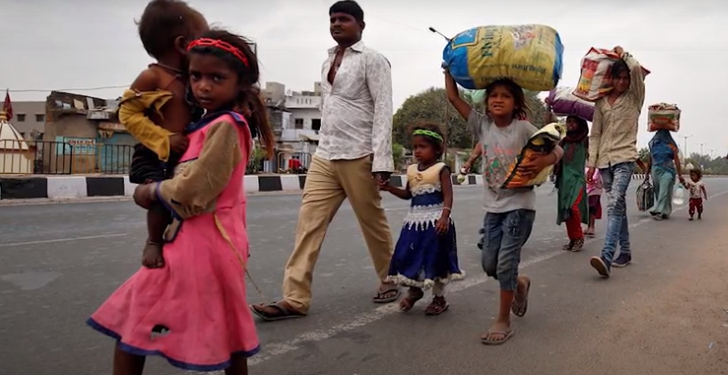 B. Prasant, PV correspondent in India

The thin emaciated woman lay on her back by the side of the highway that leads away from Delhi towards Kolkata. Her arms akimbo, her knees folded together and drawn up, her body barely covered in a torn-to-strips cloth that had once been a red saree. Her eyes drew attention because they were wide open – death by starvation had surprised her mid-stride in her young life. A puzzled and underfed child, presumably hers, meandered around the body that was already in the grip of rigor. From time-to-time, hesitatingly and with great care, the child would take hold of a corner of the shredded pallu of the saree that lay pooled on one side, and gently coo to her.

The vast and unending stream of millions of tired men and women, with children around their midriffs or on their back or in tow, passed grimly by and would not register the death or the toddler. They had reason not to stop. They had gone for days on end without food, stopping and drinking the dank smelly water of the roadside ditches, and they carried enormous loads on backs that were bent with utter fatigue. They took along as much of what had been their household as they could. Each had children in tow, and domestic animals – goats, sheep, dogs.

Harassed by the police, assaulted and robbed of their pitiful belongings by the fascist goons of the Hindutva parties, women assaulted and killed and left in the harsh summer sun, and children forcibly taken away, they marched: sullen faces, weak limbs, uncertain gait, a bleak future looming darkly ahead. And they shall lead the massive spread of COVID-19 infection, when the feared surge hits an ill-equipped nation by the beginning of July.

The marching millions are the migrant workers, urban and rural, that run the country’s largely agriculture-based economy. Away from their home states for generations, they tend the farms, they till the land, and they are employed in the myriad of small production units and shops and establishments across the land. Why did they migrate in the first place? The answer must be sought in the extremely uneven socio-economic growth of the country, with close to 95 percent of the population living below the poverty line. Unable to find gainful employment in the poorer states of mostly eastern and northern India, they went away to the west and south.

And now, a spreading panic has set in. With the coronavirus infection spreading across the land and a rising death toll that reflects the country’s extremely poor health infrastructure, they would rather go home and die among their own than starve in the states where they have eked out some kind of life all those decades.

What had gone wrong for them?

During the first weeks of February, when cases of ‘unknown pneumonia-like symptoms’ and fatalities were being reported from various parts of the country, Modi and his ministers would not respond and sought to explain the cases away as a form of seasonal flu. When infection cases and death-rates started to mount alarmingly, Modi waited, and waited. Finally, on March 24, he suddenly declared a nationwide lockdown via a television address and on only four hours’ notice. This threw the Indian economy out-of-gear: all production units in urban and semi-urban areas were shut down and farmers and peasants were asked to stop work, deserting fields filled with seasonal crops. Since then, in an arbitrary way that has not involved the parliament, Modi continued to increase the lockdown period but without introducing measures to help the economy or to in any way improve the weak and tottering health infrastructure.

The migration, with its mounting tragic consequences, can be directly laid at Modi’s door.

As the days went by and the lockdown continued, more and more migrant workers started to come out and, finding little or no transport, chose to walk home. At the time of writing, more than a thousand have perished on the way. Hunger and diseases are the most common cause, and there have also been accidents involving trains and trucks. And menacingly, many of the migrant workers are symptomless carriers of the virus – as they reach their destination, the community-based infection begins its fatal spread.

The lockdowns have not been utilized as they should have been, which is to strengthen basic health infrastructure. The death rate increases every week, indeed every day. Figures are manipulated but the grim fact remains that fewer and fewer people, especially the poor, are able to recover, weakened as they are with peripatetic illnesses and sheer malnutrition. Fearful days await the country as the infection keeps spreading at a faster rate. At the time of writing, government statistics speak of over 207,000 people infected; but the actual figure, by all accounts, is much higher. Disturbingly, the death rate has suddenly started to show signs of a steep rise.

The economy is sinking, with both rampant unemployment and a helplessly weak rate of gross domestic production on the horizon. With a new surge of the fell disease still around the corner, Modi has made another sudden and arbitrary decision to rapidly phase out the lockdown. As fatalities increase further and further, a fearsome future awaits the country and the future impact on the Indian society and economy shall be severe, bordering on decimation.

Worrying days are ahead for India.