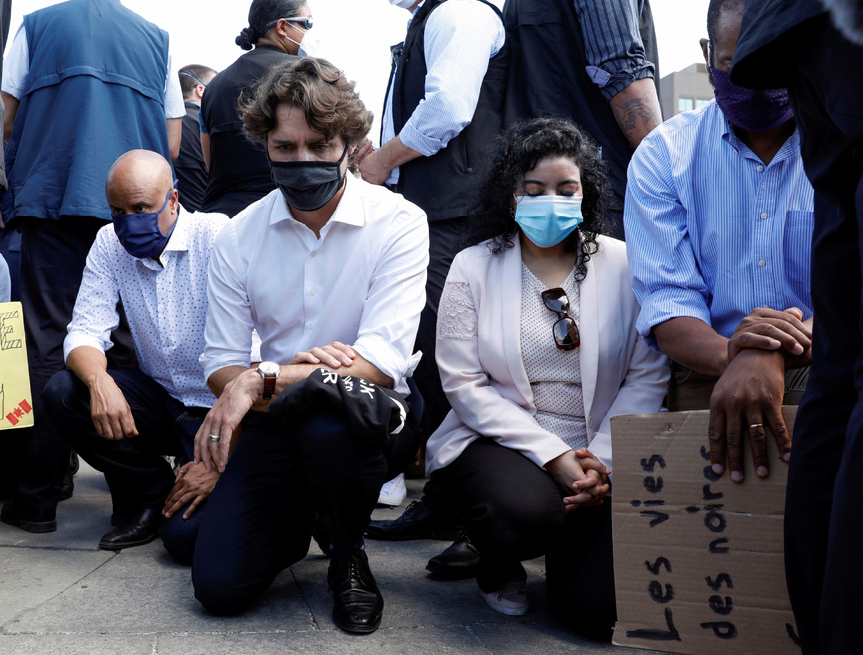 The weekend of June 6-7 saw protests in communities across Canada, denouncing systemic racism and police brutality. There were huge turnouts in large centres, but some of the most impressive rallies were in smaller cities.

Perhaps the most astonishing (and thoroughly inspiring) rally took place in Antigonish, Nova Scotia. The small university town has a population of just under 4500, but a reported 4000 people showed up on June 6 to denounce racist police murders and demand change.

This kind of mobilization means that the backyard of virtually every politician in Canada had some kind of rally, march or vigil calling out systemic racism and calling for justice.

Most of the mass media, however, didn’t report this.

Instead, the big news – and one of the most circulated photos from the demonstrations that weekend – was of Prime Minister Justin Trudeau taking a knee at the rally in Ottawa. “He nodded! He clapped!” So bleated the press. Certainly, Trudeau’s presence at the rally stands in welcome contrast to the responses from Donald Trump (boasting about the readiness of militarized forces to disperse protesters), or Doug Ford and Francois Legault (denying that systemic racism exists at all). But really, is the media love-in for Trudeau warranted, when all he really did was what tens of thousands of people have already been doing?

In fact, when we factor in Trudeau’s concrete record on racism, it’s hard to not see his knee-taking as much more than another well-planned photo-op. After all, his is a government that repeatedly fought Canadian Human Rights Tribunal orders to immediately cease its discriminatory funding of First Nations child and family services. The Liberals used COVID-19 as an excuse to shelf the action plan on Missing and Murdered Indigenous Women and Girls, a plan they were already dragging their feet on for months before the pandemic. Trudeau’s government has been extremely slow in responding to calls for non-violent inmates to be released from federal prisons, which are a literal incubator for the virus. In the process, the government is condemning thousands of prisoners – who include wildly disproportionate numbers of Indigenous, Black and racialized people – to illness and even death.

When Colin Kaepernick famously took a knee, it was out of genuine principle. It was a courageous act that cost him his career.

When Justin Trudeau takes a knee, he is distorting principle in order to further his own career.