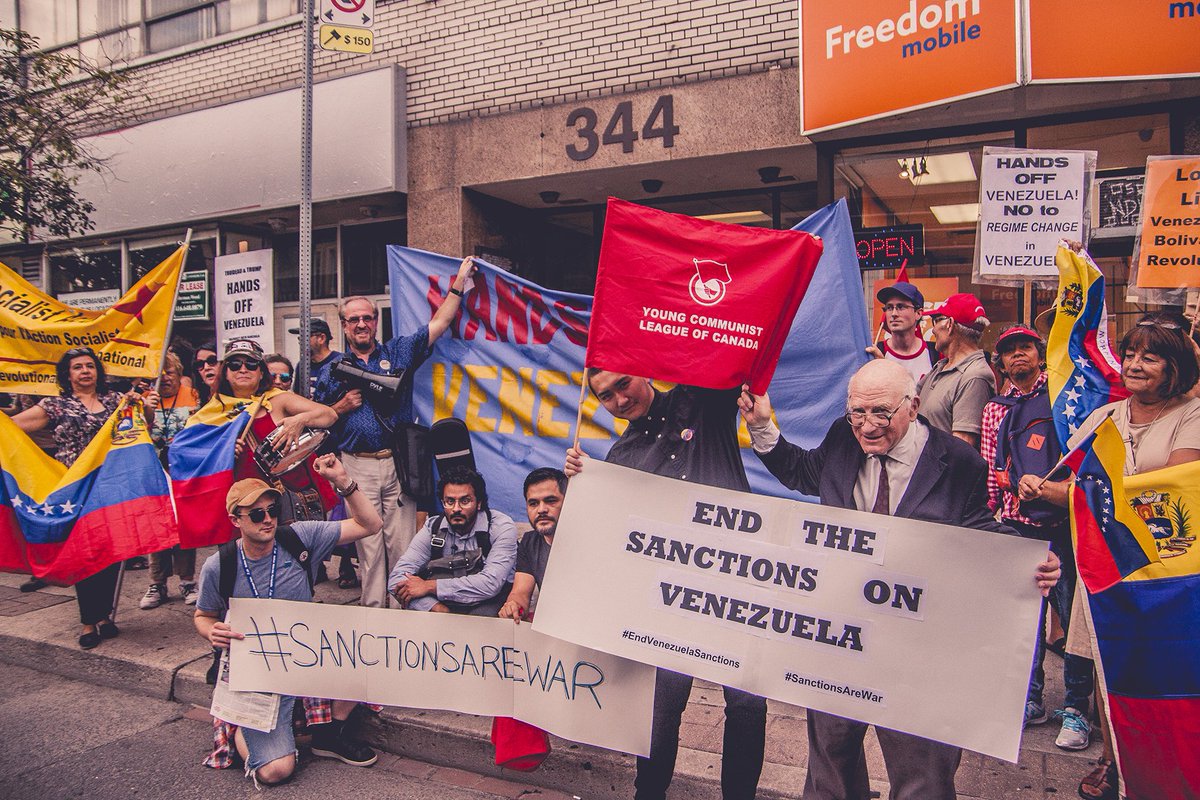 Yet while this event has been routinely pilloried, including in the financial press, many around the world have failed to notice the ongoing violence of international sanctions on Venezuela, which have made combating the current coronavirus pandemic even more difficult. The United States has refused to lift sanctions on Venezuela and elsewhere, despite calls to do so by the United Nations, considering the pandemic. In fact, the US is trying to take advantage of the crisis to renew pressure for Maduro’s resignation, adding new charges to him and other officials and laying out its own transition strategy for an interim government. Canada, similarly unperturbed by the advice of the UN, continues to impose its own sanctions on Venezuela and 19 other countries.

However, not everyone has forgotten the daily challenges of Venezuela and other countries during COVID-19. On May 7 the Mennonite Central Committee Canada, Nobel Women’s Initiative and United Church of Canada sent a joint letter to Foreign Affairs Minister François-Philippe Champagne calling for sanctions to be waived.

“As civil society actors, we have active relationships with partner organizations and friends in Cuba, the Democratic People’s Republic of Korea, Gaza, Iran, South Sudan, Syria, Venezuela and Zimbabwe working for a peaceful end to conflict, the creation of conditions for reconciliation and peace, and the provision of the basic needs for everyone, including women, children, the elderly and the disabled,” says the letter, which adds that sanctions especially hurt the most vulnerable people.

For the United Church, the largest Protestant denomination in the country, this is the latest example of a long history of solidarity with the Venezuelan people.

It would be saying too much to suggest the United Church has been an uncritical supporter of the Bolivarian Revolution inaugurated by the communes of Venezuela and the election of Hugo Chávez in 1999. In its current call for dialogue, the church says it does not support either side, but supports a process that would bring the parties together to talk. But the organization has consistently questioned the easy narrative that has painted Chávez, and now Maduro, as increasingly authoritarian despots and dictators who should be removed at all costs. More than that, the church has advocated for the self-determination of the Venezuelan people, unimpeded by the interests of extraction industries, political alliances, or renewals of the Monroe Doctrine.

In February 2019, amidst US-led calls for Maduro’s immediate removal, the church urged dialogue in the country and warned against intervention from others, a position it reiterated this January.

Jim Hodgson has worked as the Latin America Partnership Coordinator for the United Church for 20 years. In 2018 he went to Venezuela as an election observer (a role he calls a “sacred responsibility”) with Common Frontiers, a coalition of labour and civil society groups. They concluded that the election, won by Maduro, was transparent and legitimate.

“I got involved with Venezuela because of our partnerships in Cuba and Colombia,” says Hodgson. After Chávez was elected in 1999, Hodgson says, Cuban Christians approached their Canadian partners asking, “What can we do, what can you do with us, to build solidarity, to help people understand better what’s going on?”

During a 2004 trip to Venezuela, Hodgson attended a meeting that Cuban churches had organized with their Venezuelan counterparts. “The Venezuelans wanted to learn from the Cubans about how to live in a socialist society, exercise influence, accompany the people, all of those phrases.” A key organization was the Martin Luther King Memorial Center in Havana, created by Baptist pastor Raoul Suarez and others as a place for Christians to participate in the Cuban revolution. Hodgson’s Venezuelan partners had a similar impulse, wondering how to participate in the Bolivarian revolution.

Meanwhile, Venezuela became a common ground for successful negotiations between certain Colombian politicians and the Fuerzas Armadas Revolucionarias de Colombia, providing hope for peace. These connections led many people in Canadian churches to analyze the history and process in Venezuela themselves, and to consider the broader meaning of the changes there.

The United Church’s independent analysis led them into significant differences of opinion with the current Liberal federal government. “There are various places where the church and other organizations sit down with the government and talk about policy in Latin America,” Hodgson says. “It got to a point where we’d go to a meeting to talk about human rights or peace in Colombia or Mexico, or Honduras or Guatemala, and government officials would say, ‘Yeah, but what about Venezuela,’ two or three times.”

“Then someone would bite, and say, ‘We have a different point of view on Venezuela. We think the government is doing a good job of ensuring the well-being of the majority of the population, and mostly managing the human rights situation fairly well. Sometimes things happen, but mostly they’re doing a pretty good job.’ We would have these kinds of conversations.” Hodgson notes this was before the formation of the Lima Group, an Ottawa initiative created in 2017 that draws together Latin American leaders, including representatives from far-right governments like Brazil and Argentina, to discuss how to remove Maduro from power.

“We tried to press [the Liberals] a bit for a more flexible position,” says Hodgson, “but the hardliners continuously won out.”

Ultimately, when it comes to Venezuela, the Canadian government chose what Hodgson calls a “class option.” “The system that had existed before [1999] enriched some people, the wealthiest class and the middle class, to an extent that it’s been very easy for that sector to maintain its unity against the majority, which was poor, and never benefited at all from the oil industry, such as it was, until after the Chávez election.” It is that wealthy minority, Hodgson suggests, connected with the interests of a wealthy minority in Canada, that has determined Canadian foreign policy.

“Preferential option for the poor”

In contrast to Canada’s option for the wealthy class, Hodgson says the United Church tries to take what theologians call the “preferential option for the poor,” a phrase that originated in Catholic liberation theology in Latin America in the early 1970s.

“The church,” Hodgson explains, “seeing itself a little bit apart from the people, said, okay, when there are competing claims, we will stand with the poor.” This principle was affirmed in its own way in Protestant churches. Though the specific language might differ across denominations, Hodgson says that “we all understand what we mean, that we want to stand with the people who are pushed aside, marginalized—that we need to find ways of being in solidarity, not just out of institutional power, although that’s useful, but also to participate in people’s movements.”

This means attempting to find out what the marginalized are saying about their own desires, and not chasing the latest trends in Ottawa or Washington D.C. “Churches should have a longer term view of justice and change,” says Hodgson. “Elections come and go, movements rise and fall, but we need to continue to move forward with an agenda that supports the aspirations of the people, that sustains the people’s voice, to put it quite literally.”

Venezuela has spent the last two decades redistributing wealth, experimenting in developing democracy in different ways and resisting imperialism, even during an economic crisis. Contradictions in Venezuelan society and global capitalism have made these achievements increasingly difficult to maintain and expand. Yet while Canada falls in step with other wealthy countries and goes out of its way to organize opposition to the Bolivarian project, the United Church has chosen to accompany the Venezuelan people as they find their own way through the revolutionary process. As Ottawa continues to take a leading role in the aggression against Venezuela, all people – including Canadian churches – will need to resolutely decide whose claims they prefer.