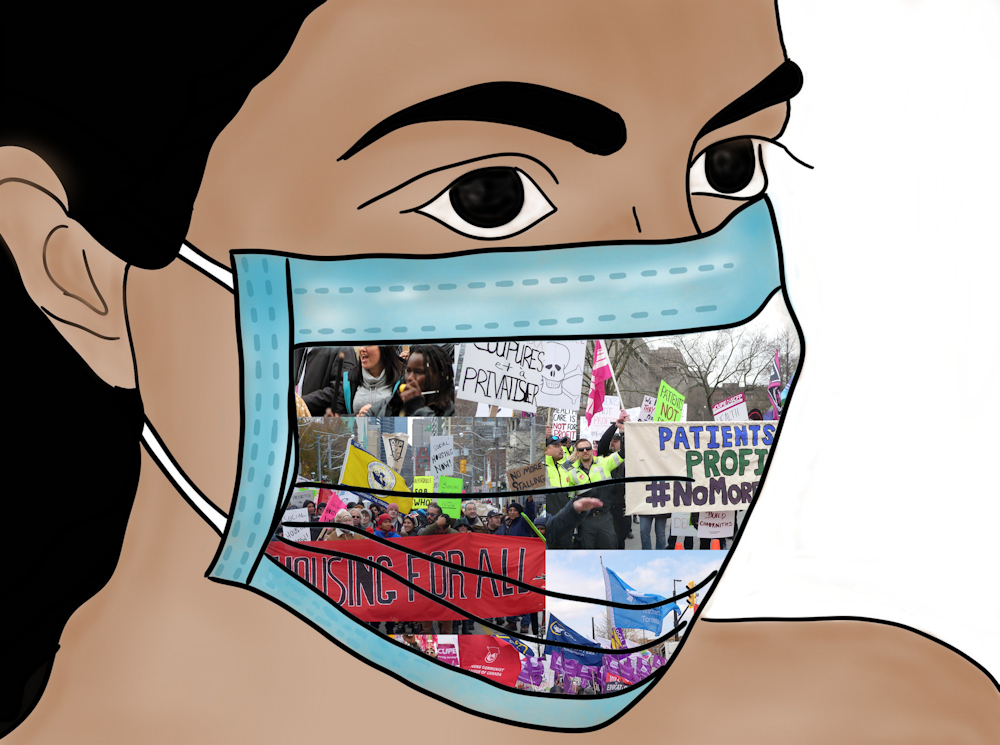 “Do you think that the Russians want war?” So asked Dick Gaughan in his anti-war song, “Think Again.” Cutting through the ideological barrage of the Cold War and the frenzied imperialist drive to militarism, he snarled, “Do you think it’s possible, knowing their past, that they’d ever consider repeating the last, when twenty million were slaughtered by Nazi invasion?”

It’s an invitation to critical thinking that some in the working class movement should accept today, as we face our own ideological barrage that claims class distinctions are completely dissolved by the coronavirus pandemic. In the face of this Great Equalizer, we’re all “in this together.” Ontario’s anti-labour Conservative government provides a spectacular example. Declaring that health care workers are underpaid – and claiming to have long championed that position – Doug Ford introduced a $4 hourly increase; in response, public service union leader Warren “Smokey” Thomas publicly applauded the government “for listening and moving the yardsticks.”

Such “covideology” sunk to new lows these past weeks, when Canadian Labour Congress President Hassan Yussuff and Canadian Chamber of Commerce CEO Perrin Beatty issued a joint call for a “National Task Force” to reboot the economy. Beginning with a self-congratulation on their mutual support for the Liberal government’s meagre emergency income benefits – a pretty low standard, even for class collaborationists – Beatty and Yussuff declare that “the COVID-19 pandemic has tied our well-being to one another like never before.” Striding arm-in-arm, the two propose, “we will need to revisit policies on health care infrastructure,” in order to emerge from the crisis with a stronger economy. It’s sweet that Yussuff has found a new friend, but it’s beyond doubtful that Beatty is seeking a health care infrastructure that is fully publicly-owned and operated, with well-paying union jobs and secure pensions, funded through progressive taxation that puts the burden onto corporations and the very rich.

So, just who are these supposed corporate heroes of the working class with whom we are to now find common cause? Doug Ford’s neoliberal austerity is legendary, even during this time of “tied well-being.” In response to increased work refusals arising from the pandemic, he created a Work Refusal Advisory Committee to “guide” the Ministry of Labour’s decisions – as a result, not a single one of the over 200 filed work refusals was upheld.

And the munificent corporations who have offered workers increased “pandemic pay” includes meat packing companies like Cargill and JBS Foods, whose business-as-usual approach and insistence on putting profits before people resulted in widespread sickness and increased deaths among workers and their communities in Alberta and Quebec.

As if aware that such glaring contradictions risk undermining their proposed corporatism, Yussuff and Beatty specifically warn, “Partisan divisions are starting to appear again after an all-too-brief moratorium … as we prepare for recovery, Canadians must not forget the collaboration and solidarity that got us to this point.”

Indeed, we are at a difficult point. And collaboration has definitely had something to do with getting us here.