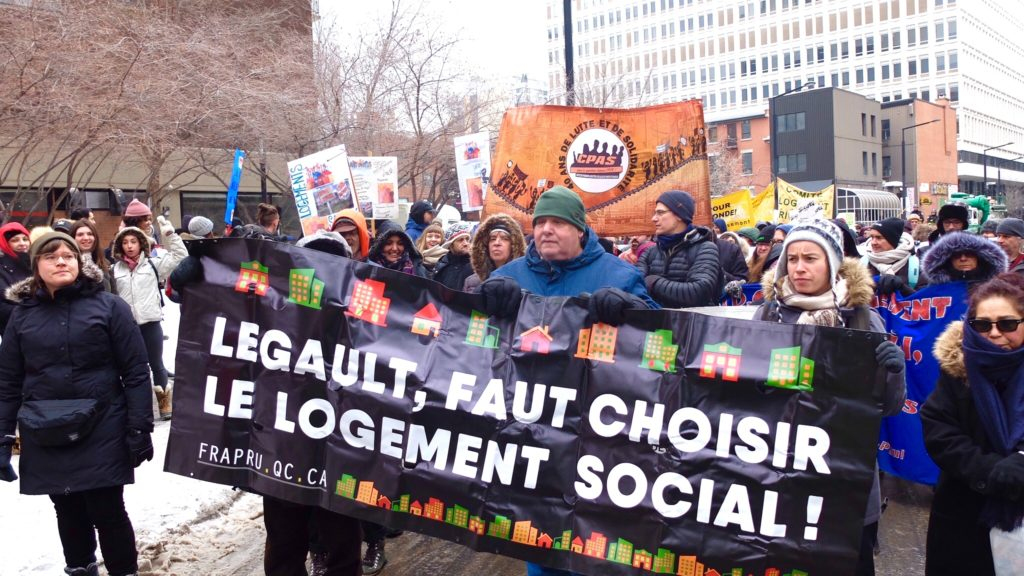 On the eve of the COVID-19 health emergency, Québec was already experiencing its most severe housing crisis since 2001. The vacancy rate for rental housing in Québec cities with a population of at least 10,000 people was only 1.2 percent, and a mere 0.7 percent in Montreal, according to the latest statistics from the Canadian Housing and Mortgage Corporation (CMHC). The accepted rate for a “balanced market” is 3 percent. The low vacancy rates permit landlords to pick and choose their tenants (facilitating discrimination), raise rents substantially, and neglect necessary repairs. Nearly 200,000 households in Québec were spending at least half of their income on housing costs. The CAQ government’s response to this grave crisis was limited to simply renewing inadequate budget allocations for new social housing. Smelling increased profit margins, capitalist rent extractors and speculators (landlords and developers) began intensifying legal and extra-legal manoeuvres to get rid of tenants who brought them a lower rate of return or who had the annoying habit of standing up for their rights. Evictions and harassment of tenants were on the rise, stimulated by a housing market characterized by scarcity and speculation.

Mass unemployment and unexpected expenses caused by the COVID-19 pandemic can only exacerbate these problems. True, housing groups and tenant’s advocates have been able to obtain an eviction freeze in Québec for the duration of the health emergency, but the CAQ government has refused to implement a rent freeze, which would protect tenants from massive evictions once the Rental Board (Régie du logement) starts hearing cases again. Québec has offered a $1500 loan to tenants unable to pay rent, but to obtain the loan tenants have to prove they have lost their jobs because of COVID.

With Québec reopening non-essential businesses and shopping malls, landlords are chomping at the bit for the Rental Board to resume evictions. In a recent interview with CTV, Québec Landlords Association spokesperson Hans Brouillette promised massive evictions: “As soon as evictions will be possible, you’ll see bailiffs being very active. We need unpaid renters to leave the apartment, because this apartment may be rented to someone else starting from July 1.”

We can be certain that landlords – operating on a basis of pure exploitation – will take advantage of the crisis, in the broader context of a severe housing shortage in Québec, to evict lower-paying tenants in order to substantially raise rents.

Worse, little to no effort has been made to provide homeless people with any kind of stable housing. Shelters have been forced to close, unable to provide the necessary sanitary conditions to ensure the security of the homeless residents and social workers. Although the state of emergency declared by the City of Montreal allows for the requisition of any private housing, to shelter vulnerable people and prevent the spread of the virus, the City has been slow to use these powers. Letting people get sick and die in the street – the effective policy for the last two months – is a form of barbaric social cleansing.

The pandemic throws a clear light on the absolute housing disaster in Indigenous communities. In October 2019, United Nations Special Rapporteur on adequate housing Leilani Farha explained that in the North, people establish staggered schedules for sleeping, because it is not unusual to have 15 or more people living in the same dwelling. “This situation is completely unacceptable for a rich country like Canada,” she told Le Devoir newspaper. “The colonial-type relationship with Indigenous peoples that persists to this day must end.” These unacceptable housing conditions put Indigenous peoples particularly at risk with the current pandemic.

Bourgeois journalists in Québec bemoan the “class war” supposedly initiated by tenant advocates calling for a rent freeze. On March 31, Laura-Julie Perreault of the editorial team at La Presse denounced the movement calling for a rent freeze, writing, “It is not by division and class war that we will succeed in weathering this storm, but by empathy and solidarity.” Clearly, she is calling for empathy and solidarity with landlords. Working-class people are already bearing the brunt of a violent class struggle aiming to maximize rent extraction and speculative profits – the call for a “truce” in this class struggle during the pandemic is disingenuous and pathetic. Where was the “empathy and solidarity” with working-class tenants before the COVID-19 pandemic?

The health emergency brutally demonstrates that housing is one of the most important determinants of health. What Dr. Norman Bethune said in 1936, during a speech promoting socialized medicine, is all the more relevant today: “Health is always public. The sickness and poor functioning of a single individual affects all the other members of society. The protection of people’s health is the first duty of the State to its citizens.”

The negation of the right to housing for hundreds of thousands of tenants in Québec before the crisis was already an eloquent example of the failure of capitalism to meet the basic human needs of the great majority. The current crisis, linked to the COVID-19 pandemic and to the deep structural contradictions of capitalism, shows that this failure is not only inhumane and immoral, but it is also a danger for the health of the entire society.

Only socialist principles of safe, secure and affordable housing for all can adequately protect society during, and after, the pandemic. The Communist Party of Canada is demanding emergency housing measures during the crisis. These include banning evictions, renovictions, foreclosures and utility cut-offs; cancelling rents during the pandemic and barring corporate landlords from rent subsidies; housing the homeless with emergency, interim and permanent social housing; and providing emergency housing on reserves and in Northern and isolated communities.

These are basic measures that are necessary to protect public health. If the ruling-class cannot understand that, they will not only be digging our graves, but their own as well.