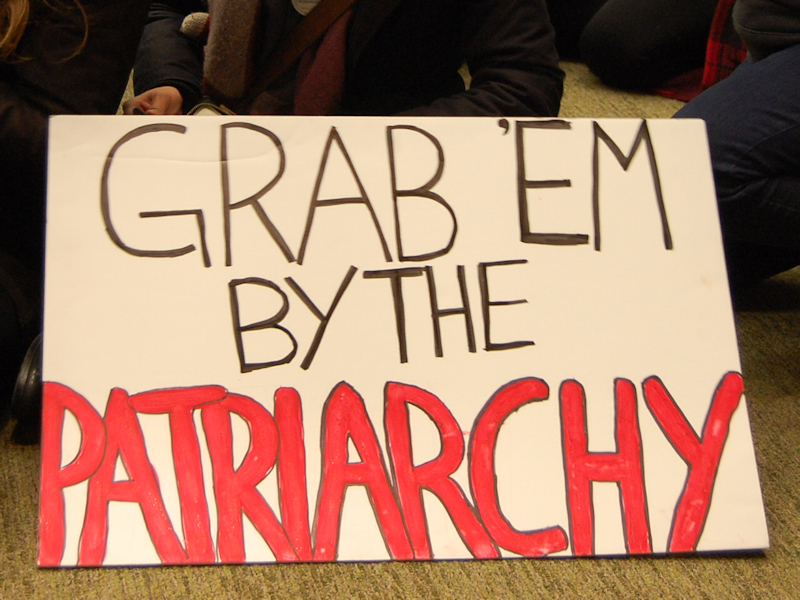 This year, May Day celebrations will be under the unfortunate constraints imposed by the COVID-19 pandemic, so we are unlikely to see masses of workers marching in the streets. Yet, workers must remain committed to building unity in the struggle for better working conditions, stable non-precarious jobs in all sectors, just pay, health benefits including pharmacare, good pensions, childcare and paid sick leave.

Women are among the first and hardest hit by the economic crisis caused by the pandemic. This is the case during every recession, and it reflects the profound gender inequality that is systemically embedded in capitalism. Rooted in the gender division of labour, this inequality facilitates capitalism’s reproduction and capitalism, in turn, reproduces gender inequality. A crisis such as the present one highlights this reality and reminds us that the struggle against capitalism must include the struggle for equality for women.

Educator Jeanne McGuire drew this together during a recent presentation:

“We demand jobs, good jobs, value-added jobs. We want an end to precarious jobs because precarious jobs mean precarious incomes, precarious housing, precarious nutrition, precarious health, precarious lives. We want investment in infrastructure – public transit, clean water for indigenous communities, sustainable energy. We want the rights of the Indigenous peoples and nations to be recognized and respected, including the right to have the final say over developments on their lands – any and all developments. And free public childcare is now an even greater necessity if women are not to be pushed out of the work force by the crisis. And women are already feeling the effects of the layoffs disproportionately.”

Another reason that women are disproportionately affected during this pandemic is that they form the overwhelming majority of workers in the health care sector. Statistics Canada data from 2018 indicate that women comprise 82 percent of health workers in Canada, nearly 10 percent higher than the global rate of 75 percent. This has been a growing employment sector, especially for women – from 1997 to 2016, employment increased nearly 70 percent, and the proportion of women working in it grew at a rate of 72 percent. By comparison, the proportion of men working in health grew at a rate of 55 percent.

In the context of COVID-19, then, women are far more likely to be exposed to infected persons, as well as expected to work in stressful and isolating conditions. The increased pressures on women’s physical and mental health, combined with the impact they may feel in their families, take a particularly heavy toll. These are work issues that are concentrated on women, but which have a profound effect throughout society.

The Communist Party’s recent policy document “Healthcare is a Right – Not a Commodity” calls for particular protections for all front-line healthcare workers. These include immediately providing personal protective equipment (PPE) to everyone healthcare worker in all capacities; free childcare, food, sanitation and transit; and emergency housing during the pandemic. The document also calls for recognizing the credentials of international trained healthcare professionals and for accelerated production of PPE and ventilators through retooling of facilities like General Motors’ closed Oshawa plant, through public takeover and operation if necessary.

The pandemic has exposed the dangerous weaknesses of underfunded and privatized health care, including long-term care. Here, again, there is a convergence between underfunded services and women-dominated work sectors. Addressing this – by reversing privatization, increasing funding and improving wages and benefits – will not only save lives and help contain the virus, but will also be important reforms on the road to equality for women.

As the pandemic has spread, the issue of violence against women has yet again become more widespread across Canada. Forced to stay in their homes, and often with sharply reduced incomes, women who experience domestic and gendered violence have fewer options for their safety and protection. Shelters are filling and their phonelines are flooded with calls from women seeking help to escape both physical and mental violence. Government underfunding of shelters and transition houses have meant a lack of children’s programs, mental health experts, transit to doctors’ appointments and family court dates, and other services women need to re-establish themselves safely. The high cost of housing is another huge barrier for women and their children to escape violence.

The majority of people killed during the terrible mass shooting in Nova Scotia were women.  Sheri Lecker, executive director of Adsum House women’s shelter in Halifax stated that, “Every 2.5 days, a Canadian woman or girl is murdered, most often by a man. Each week, on average, one woman is killed by her male partner. The hatred of women that leads to violence and eventual homicide is known as ‘femicide’ and must become part of our vocabulary, and we must ramp up our actions to bring an end to it.”

In order to protect, defend and enforce the rights of women – and to integrate that struggle with those of workers, racialized and Indigenous peoples, immigrants and the LGBTQi2S folks – we need a strong and structured women’s movement. It has been almost a quarter of a century since the federal government pulled operational funding from the National Action Committee on the Status of Women (NAC), dealing a fatal blow to the pan-Canadian women’s organization. Since then, women’s voices have not been silenced. We have continued to demand an end to violence in our lives, in our workplaces, on the streets and in our homes. We have maintained our struggle for the right to strike, organize, picket and bargain collectively. We have not wavered in our demands to enforce hate speech laws and make hate groups illegal.

But we are to advance in our daily struggle to curb corporate power and put “People before Profits” and open the path to full equality for women and gender oppressed people, we need to rebuild a Canada-wide organization with labour at its core.

Let’s celebrate May Day this year with a commitment to building such a movement.

This article is part of PV’s redFEM Dispatches column.