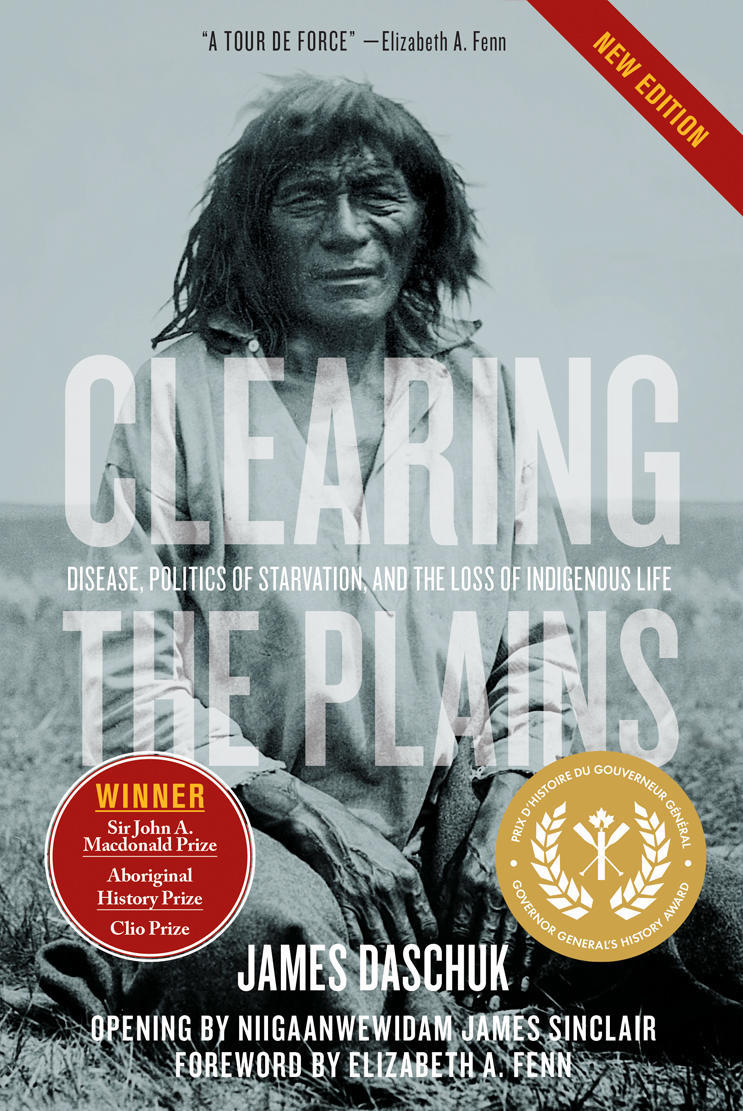 Clearing the Plains: Disease, Politics of Starvation and the Loss of Aboriginal Life

What economic system extends its reach across entire continents, wiping out the lives of its own workforce in order to extract resources and goods which can be sold for huge profits back in the home of the dominant military power? That description describes today’s global capitalism, but as University of Saskatchewan scholar James Daschuk writes in Clearing the Plains, it also fits the early colonial era of what became Canada.

Human history has frequently been shaped by unexpected forces, beyond the immediate control of those affected. Of course, some challenges are quite predictable – the environmental impact of large-scale emissions of hydrocarbons was described by scientists for decades before the need to act on their warnings became widely understood.

Then we have natural disasters on a larger or smaller scale – floods, hurricanes, volcanic eruptions, droughts. All of these can have a huge impact, usually for a limited time or on a more localized geographic scale.

The eruption of Mount Vesuvius in the year 79 CE spewed a cloud of super-heated gases, molten rock, pulverized pumice and hot ash, releasing 100,000 times the thermal energy of the Hiroshima-Nagasaki bombings and obliterating several cities. Devastating for the residents of Pompeii, but without altering the overall arc of Roman history.

Epidemics have often been a different matter. The Black Plague which killed an estimated one-third of the peoples of Europe was an important factor in changing the prevailing feudal system, helping to open the doors for a shift towards capitalism. The Plague even resulted in a big jump in wages, as employers struggled to expand their workforces in its aftermath.

Wikipedia (admittedly not always a reliable source) lists some 200 or more plagues and epidemics throughout recorded history, some with deadly and lasting consequences for particular societies. As the world struggles with the current COVID-19 outbreak, some fear it could match the scale of deaths seen during the “Spanish Flu” epidemic of 1918-19.

But probably the single most devastating series of epidemics in history began with the arrival of European colonizers into the western hemisphere, starting in the late 1400s. The powerful and advanced civilizations of modern-day Central America and the Andes suffered enormous losses, initially at the hands of brutal invaders armed with superior weapons, then in far larger numbers as “Old World” diseases spread like wildfire. Medical science of that era knew little about germs and viruses, but disease quickly became the main threat to the Indigenous peoples of the hemisphere.

This was also the case in the area of North America now known as western Canada. In his groundbreaking work Clearing the Plains, scholar James Daschuk pieces together a vast range of scientific and historical research to provide a clear picture of this story. For the purposes of this review, Daschuk sheds valuable light on the ways in which measles, tuberculosis and other diseases – but smallpox in particular – wiped out huge numbers of Indigenous peoples on the western plains and forests, even eliminating entire societies of people who had no immunological resistance against this deadly wave of plagues.

It’s true that genocidal criminal acts were committed during the seizure of Indigenous lands, cases where smallpox-infected blankets were distributed to starving and desperate people in the full understanding that this was a death sentence. We should never underestimate the depths to which invaders will sink in their drive to steal lands and resources.

But most of the casualties caused by smallpox were the result of much more prosaic activities, especially the expansion of the fur trade. In search of highly desired beaver pelts used to make fur hats for buyers in England and continental Europe, fur traders penetrated deep into the west during the three centuries after the earliest settlements in modern-day Quebec. As beaver populations were over-trapped, the voyageurs relied on river routes to find new communities to bring into the trade, offering a wide range of consumer goods in exchange for beaver and other furs.

Inevitably, these goods carried the diseases to which Europeans had gained some degree of immunity over thousands of years, but which were deadly to their trading partners. Daschuk recounts many of the descriptions written by traders, as entire communities suffered death rates anywhere from one-quarter to ninety percent or more. In many cases, small groups of survivors included those least able to rebuild their communities and who were compelled to seek entry into others. Dramatically reduced in numbers, decimated peoples such as the Kutenai or Snake were forced to relocate into the mountains from their traditional plains territories, or to forge new alliances with former rivals.

The result was the destruction of the largest part of the population in today’s prairie provinces, further weakened by the “fur trade wars” between European-based rival companies which broke out in the late 1700s. After that deadly era, the buffalo herds which had been the main source of food and raw materials for the plains societies were also wiped out by the invaders. By the post-Confederation years, Indigenous peoples saw no serious alternative to negotiating the “numbered treaties” with the new Canadian state, aiming to gain some annual income, education, and training in agriculture, so that they could avoid starvation. That period is the subject of later chapters in Daschuk’s book, and the subject for another review.

Today, still holding vivid historical memories of those experiences, many Indigenous nations in geographically isolated corners of the west coast are blocking any outsiders from entering their lands. Since poverty and poor health make the impact of disease much worse, they hope to avoid the outbreak of COVID-19, at least temporarily. Let’s hope that this time they succeed.