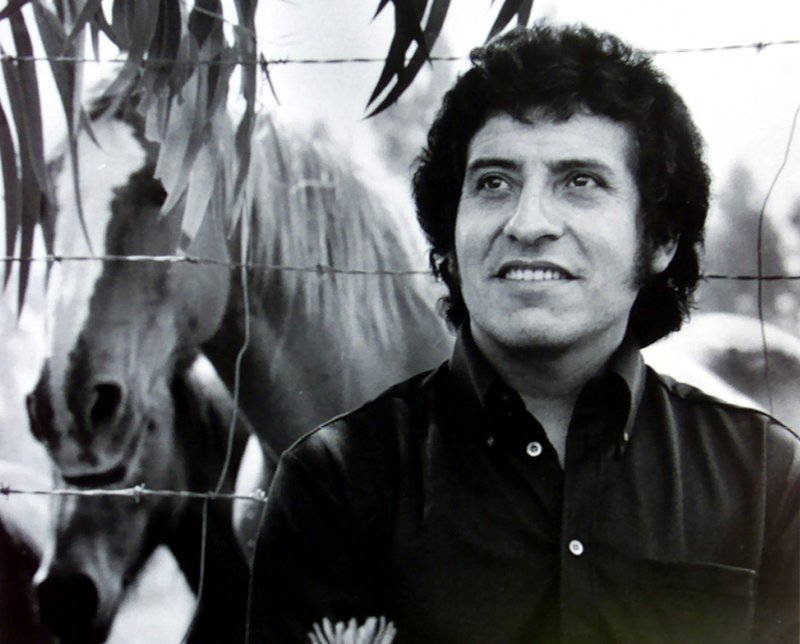 A social explosion is shaking Chile – an unceasing wave of massive demonstrations which began October 18, demanding better living conditions and aiming to replace General Pinochet’s fascist 1980 constitution through a people’s constituent assembly. It has led to the revival of several emblematic songs of the 70s and 80s, which cross the borders of time and space. Among them is a pacifist hymn that quickly landed on everyone’s lips. It resonates in all demonstrations and street activities, spontaneously at a moment’s notice, on the radio or internet, asking to be played at full volume: “El derecho de vivir en paz” (“The right to live in peace”) by Víctor Jara.

The idea for this song against US military intervention in Vietnam dates to 1967, when Víctor was at the height of his theatre career. It was not until 1969, when he worked as a theatre director mounting American playwright Megan Terry’s Viet Rock, considered the first rock opera against the Vietnam War, that this song materialized and took shape. During that time, believing that music was a more effective way to reach the whole country, he decided to gradually leave theatre to devote himself to singing in support of Popular Unity and Salvador Allende’s presidential candidacy. Still, it was not until the beginning of 1971 that this song was recorded in RCA studios, published under the Jota Jota / Dicap label, and included on the eponymous album El derecho de vivir en paz. Released in April of that year, it was performed for the first time in front of an audience at the Marconi Theater, in Santiago de Chile.

This song, considered one of Jara’s most innovative and emblematic, goes beyond his usual musical framework. “I felt absolutely free to experiment with all kinds of sounds,” he reveals in Telecrán magazine. Víctor dared to merge electric “muscle” rock with the delicate acoustic sound of local folk music, by integrating instruments that were totally foreign to him; most notably, this was through the bass and electric guitars, synthesizer and drums of The Blops, a Chilean group he discovered. “When I was looking for a way to get to the root of the people, I realized you could do it by any sound,” he explained to El Siglo newspaper. Imagined by a man of the left and interpreted by a group of musicians who have never campaigned in any political party, “El derecho de vivir en paz” always seems to find itself between two worlds, two antagonistic universes.

Several artists, including Illapu’s Roberto Márquez and singer-songwriter Manuel García, in collaboration with Victor’s widow Joan Jara, recently published a revised version of the song on YouTube. Authorized by the Víctor Jara Foundation itself, the updated words better represent the current fight for dignity, social rights and solidarity.

Perhaps Victor would have like this new version, but we will never know. The original has a different spirit – more sober, more austere – and the later version is more representative of our time and the context of current social demands. Although the Pinochet dictatorship succeeded in eliminating its creator during the 1973 coup, the current dictatorship of faithful Pinochet admirer President Piñera will not succeed in silencing his song. Many young people in the 70s discovered “El derecho de vivir en paz” on cassette, often exchanged as a small subversive object. It is not surprising to hear it still ringing among today’s protesters in this period of social revolt. It is a hymn that calls for peace and humanity, no matter the time.

It is worth noting the many versions of this song in Indigenous languages ​​in Chile, particularly the Mapudungun interpretation by Beatriz Pichi Malen, as well as in the Rapanui language spoken by the Polynesian community of Easter Island. This is especially important at this unprecedented moment, when the Wenufoye (Mapuche) flag and Wiphala (Aymara) flag are raised alongside the Chilean flag. It is another original way to mark the International Year of Indigenous Languages, ​​proclaimed this year by UNESCO.

Radio host, cultural presenter and promoter of Chilean folk music René Largo Farías said of Víctor Jara, “His voice and his guitar continue to fight, they are still alive in search of victory. And they will also return as flags when the Fatherland regains its joy.” As for Víctor himself, he maintained, “Any song that has known how to be valiant, will always be a new song.” And as Salvador Allende put it so well, “There can be no revolution without song.”