February 21 and 22 were important dates in the escalating struggle against the Ford government this winter. On the first date, Ontario’s education workers organized one of the largest strikes in provincial history; the following day, the Ontario Federation of Labour (OFL) mobilized thousands to rally outside the Ontario Conservative Policy Convention in Niagara Falls.

This strike marked the first time since 1997 that all education unions were out simultaneously. The province-wide strike was a key part of escalating rotating strikes and job actions that all four unions are engaging in. 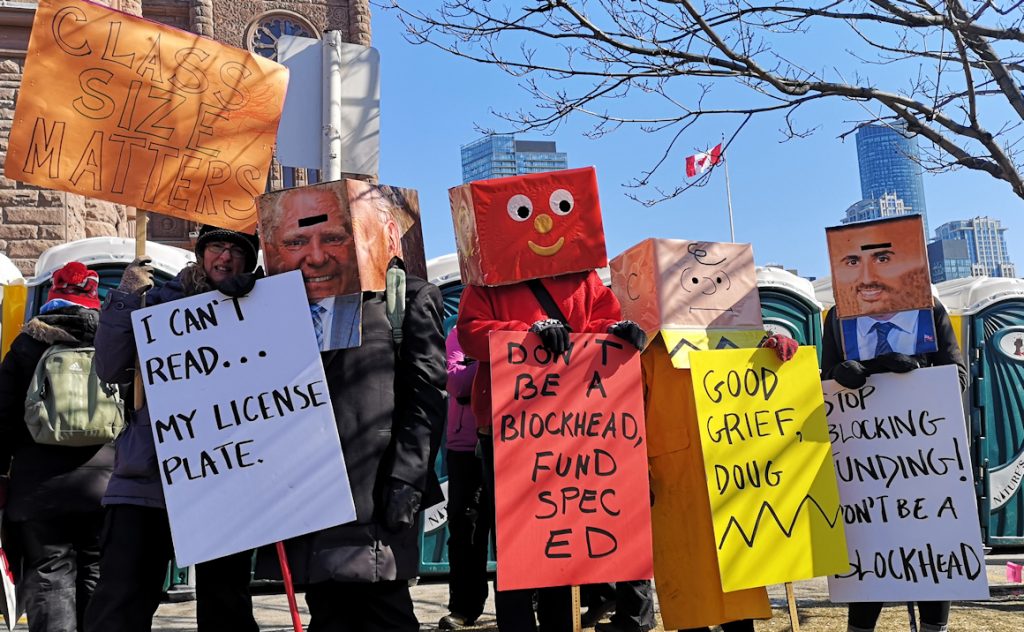 In several cities, teachers and education workers from all unions rallied and picketed together. In Toronto, thirty thousand education workers marched around the city blocks surrounding Queen’s Park in a mass picket line. In Peel region, twenty thousand marched in a mass picket which stretched 30 kms down Hurontario Street from North of Brampton to the lakeshore in Mississauga.

The day was marked by a rare and necessary display of solidarity between the unions. OSSTF President Harvey Bischof told reporters that the strike was “a demonstration of unity. It’s a demonstration we’re not divided from our members or from the public in this province.”

Poll after poll has shown that a majority of Ontarians are with teachers and education workers in opposing the Ford government’s cuts to education. The rotating strike strategy, led mainly by OSSTF and ETFO, has been able to avoid anti-democratic back-to-work legislation while building support and solidarity.

Unity between the unions and solidarity from students, parents and communities has been shown to get results. The increasingly unpopular Education minister Stephen Lecce, a private school graduate, has been forced to partially back down on some of the worst aspects of the government’s plan to attack education. The goal was to raise average high school class sizes from 22 to 28, but now the government is saying they can live with 25. The planned four mandatory online courses have now been cut back to two.

However, the new numbers will still mean that thousands of teachers will be laid off, class sizes will rise dramatically, and the door will be opened to mandatory online classes which will lower the quality of education for all students. Elementary teachers are continuing to fight against cuts to special education and for the guaranteed continuation of full-day kindergarten. Compensation rates for education workers have been frozen by the Ford government’s anti-democratic Bill 124, a sweeping wage cut bill that affects one million broader public sector workers. Education unions have been successful in linking their members’ struggles for jobs and working conditions to the learning conditions of students and the quality of Ontario’s public education system.

On February 22, five thousand union and community members made an early morning trip to Niagara Falls to protest the Ontario Conservatives’ “2020 Conference.” Labour councils, the OFL and affiliate unions organized buses from as far away as Ottawa and Timmins to the “People vs. Conservative Cuts” rally.

Around one thousand Conservative Party members gathered inside the Convention Centre, paying $250 each to hear keynotes by Doug Ford and Rex Murphy and be courted by several federal Conservative leadership contestants.

“Public services like education, health care, and programs that help the most vulnerable Ontarians live with dignity have been put on the chopping block so the government’s rich buddies and corporations can have tax relief and raises,” said OFL President Patty Coates in a press release. Labour mobilization included a strong presence from education workers, but also from the rest of the public sector as well as private sector unions such as Unifor and Steelworkers. Student unions also had a strong presence, as did the Communist Party of Canada.

The OFL pointed to the Ford government’s anti-labour and anti-worker agenda in the province. “More than 60 per cent of Ontarians support a $15 minimum wage, which the government cancelled with Bill 47, and that also took away two paid sick days from every worker in this province. Now they are attacking the right to free and fair collective bargaining with Bill 124,” said OFL Vice-President Janice Folk Dawson in the OFL press release.

This action was not the first mass labour-led protest against the Ford government, but it is important for a variety of reasons. Last year saw major rallies at Queen’s Park with tens of thousands participating, but these were led by education and healthcare unions. Although clearly necessary from the outset, the OFL’s “Power of Many” campaign had not attempted a large mass action involving broad mobilization across labour prior to this. In fact, the OFL had not organized a mass rally outside of Toronto in eight years. The February 22 demonstration, although considerably smaller than the previous day’s strike, was an important display of unity across the labour movement that needs to be followed up by more mobilization.

There were encouraging signs that labour leaders are waking up to the fact that we cannot afford to wait another two years until a possible election defeat for Ford. OFL President Patty Coates hinted at the kind of mass action it will take to reverse the corporate agenda in Ontario when she said, “If the Conservatives don’t listen to us, if they don’t hear the people of Ontario say enough is enough, we will shut this province down.”