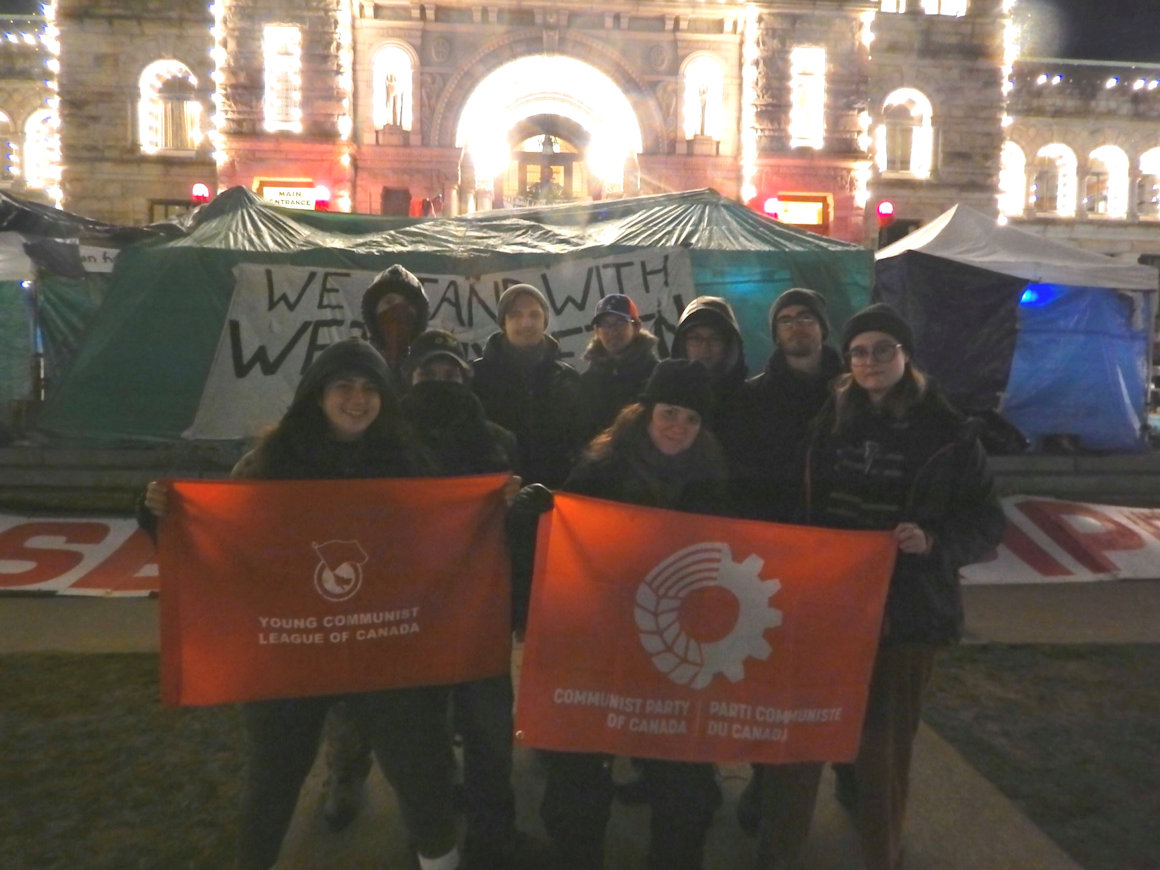 On February 11, in support of Wet’suwet’en, around 1,000 people surrounded the British Columbia legislature building in Victoria, on the traditional territory of the Coast Salish Lekwungen nation. This shutdown of the legislative session was in response to the provincial government’s support for the Coastal GasLink pipeline and for the RCMP invasion of Wet’suwet’en territory in Northern BC, where hereditary chiefs are resisting the construction of the pipeline through their traditional lands. The BC government contracts the RCMP to provide policing throughout the province.

Indigenous youth set up camp in front of the legislature six days prior and lit a sacred fire which burned continuously on the front steps. Many non-Indigenous supporters donated their food and time to the camp, occupying the space and even sleeping overnight on the legislature steps. Hundreds gathered the night before the shutdown, some having travelled all the way from Vancouver and communities in the north. A large number of youth and students skipped high school and university classes to participate on the day of the action.

Speaking to allies and the media, Indigenous organizers made it clear that the action was to be peaceful and non-violent. People were instructed to block all exits to prevent government officials from entering the building, but also to not engage in any physical confrontations or debates with racist opponents. It was a “soft blockade,” meaning everyone was told to avoid arrests, even if that meant allowing a few MLAs with police escorts to enter. No one was hurt or injured, except one demonstrator who was pushed to the ground when a government official plowed into them. Despite claims in local media that government workers were attacked, no proof has been found from the several hours of mobile phone footage that was recorded at the action.

The Indigenous reoccupation of the land surrounding the legislature successfully cancelled the ceremonial red-carpet entrance that morning, forcing the Premier and Lieutenant Governor to enter through underground tunnels and delaying the throne speech.

BC Green Party MLA for Saanich North and the Islands, Adam Olsen, managed to enter the building and attend the legislative session. He responded to the throne speech by saying it was “underwhelming” compared to the demonstrations happening outside. “As an Indigenous person working in this building, I’m reminded over and over of all of that Indigenous peoples have endured since this building was constructed to assert its dominance over this newly colonized land.”

During the throne speech, demonstrators gathered at the front entrance of the building to disrupt the legislative assembly with loud chants of “Wet’suwet’en strong!” and “Shut down BC!” An Indigenous chant leader would ask, “What do we do when Indigenous people are under attack?” and the chorus of hundreds would reply, “Stand up, fight back!” Government officials who exited the building afterwards were publicly shamed.

The Indigenous land defenders decided to disassemble their camp that evening, preferring to “walk away proudly and with strength” than allowing police to violently tear it down.

Several actions in solidarity with Wet’suwet’en took place in Victoria prior to the legislature shutdown. On January 10, students from the University of Victoria walked out of class to rally at the legislature steps, while others blocked access to the Swartz Bay ferry and hung a banner on an overpass that read “RESPECT WET’SUWET’EN LAW.” On January 22, Indigenous youth occupied the Energy and Mines Ministry office, which ended with the arrests of 13 people.

UVic students staged another walkout to join a rally at the legislature on February 6. A second rally was held the day after and then on February 8, Indigenous youth and allies blocked the Johnson Street Bridge that connects Victoria to Esquilmalt and painted a mural that declares “NO CONSENT/NO ACCESS.”

In Comox a blockade was set up on the highway, stopping most traffic but allowing motorists to take a detour route through the exit. Ambulances and other emergency vehicles were also allowed to pass through. The 22-hour blockade was eventually dismantled on February 10 due to safety concerns after confrontations from local racists. One person drove their truck through the wooden barrier while others in masks violently tore down the blockade. RCMP arrived on the scene to arrest one of the racists and escort the land defenders back to their vehicles. Hereditary chiefs of the K’ómoks First Nation were in support of the action and some K’ómoks people were involved in the highway blockade.

There have been further actions since the legislature shutdown. On February 14, pickets outside 30 different government buildings in Victoria attempted to shut down the province. The BC Government and Service Employees Union released a statement expressing support for Indigenous land defenders, saying that “the BCGEU is deeply troubled by the current and ongoing events on Wet’suwet’en territory including the use of exclusion zones, forceful removal of land defenders, and threats to journalists.” Union president Stephanie Smith told members that they “have the right not to cross a picket line.”

Victoria’s aptly named newspaper The Times Colonist misrepresented the BCGEU’s position by only quoting the part of the statement that says the union is not affiliated with the pickets and will not participate in them. Another article in the February 14 early morning edition, titled “Main goal to keep public safe: Victoria Police,” used police statements to imply that peaceful picketers in support of Wet’suwet’en were a potential danger to government employees.

Far right news media has made more direct attacks. Aaron Gunn, Victoria-based spokesperson for BC Proud, filmed a small segment of the February 14 rally on the corner of Douglas and Pandora street. In the video, he claims that actions in support of Wet’suwet’en are an attempt to “intimidate the taxpaying public to accept protesters [sic] demands,” accusing land defenders and their allies as “a small group of radicalized individuals” who “use First Nations as pawns.” The same day Keean Bexta, a reporter for the far-right Rebel Media, harassed demonstrators picketing outside the Ministry of Environment, Lands and Parks. Notably, Bexta was the only reporter the RCMP allowed through their media blockade in January around the Gidimt’en camp set up by the Wet’suwet’en.

Victoria City Councillor Ben Isitt spoke out against the misinformation being spread. He responded to a Twitter post by the Victoria Police about alleged assaults against legislature staff, tweeting that “VicPD’s mandate is to ensure public safety, not spread #fakenews.” Isitt spoke to several news outlets as a witness to confirm that what he saw were peaceful non-violent protests. Mayor Lisa Helps stated that Isitt and the two other councillors who were outside the legislature during the shutdown – Jeremy Loveday and Sharmake Dubow, who also spoke on the front steps – were not representing the City of Victoria.

Also on February 14, David Suzuki met with Indigenous youth at Uvic for a press conference. The following day, the annual Victoria Stolen Sisters March to honour missing and murdered Indigenous women and girls was attended by several hundreds, a high turnout that reflected the level of activity in the city and on social media. The “Wet’suwet’en Solidarity Victoria” Facebook page has live videos of past actions and information for allies who want to support the movement. Individuals who have already been involved are using Instagram and Twitter to share their experiences, using hashtags #wetsuwetenstrong, #alleyesonwetsuweten, #shutdownbc, and #shutdowncanada which are now trending.

Actions are continuing in the provincial capital, until the RCMP and Coastal GasLink withdraw themselves from Wet’suwet’en territory.