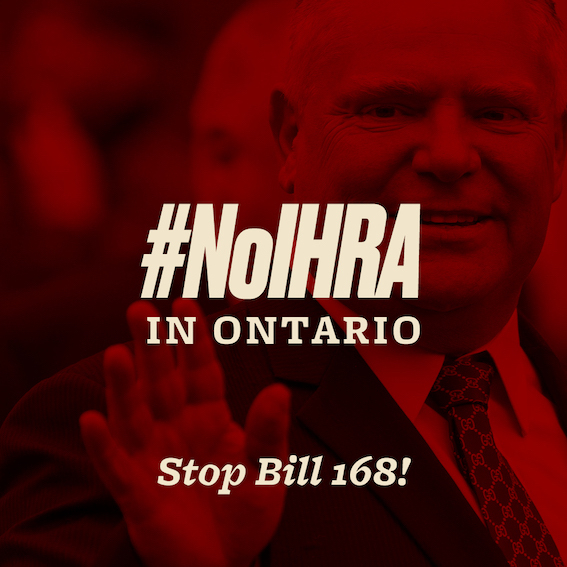 Ontario’s legislature has returned to session and with it comes the new, but much-contested, Bill 168 (or the “Combating Antisemitism Act”). Tabled in December by Conservative MPP Will Bouma, and having already passed its first reading, Bill 168 seeks to redefine Ontario’s legal definition of antisemitism to fit the working definition put forward by the International Holocaust Remembrance Association (IHRA). This definition, already struck down in multiple major cities across Canada and opposed by over 40 Jewish and human rights organizations, including Jewish Voice for Peace, United Jewish People’s Order, Independent Jewish Voices and the British Columbia Civil Liberties Association, seeks to “end antisemitism” by stifling critical engagement with Zionism and the State of Israel.

If adopted, Bill 168 would make Ontario the first province or territory in Canada to adopt the IHRA definition — following in the footsteps of Trump’s United States, which now seeks to financially suppress educational programs it defines vaguely as “overly critical of Israel” — and would allow the province to stifle free and critical political thought and efforts for peace, justice, and against racism under the guise of combating antisemitism. One needs not be Jewish themselves to take note of the global rise of antisemitism, which makes proposals like Bill 168 particularly pertinent, but the IHRA definition should be strongly opposed as both unrepresentative of just and progressive values and ineffective at combating the antisemitism it seeks to eradicate.

From only a quick glance, the IHRA seems to cover all bases; in fact, it intentionally states that “criticism of Israel similar to that leveled against any other country cannot be regarded as antisemitic” and that “holding Jews collectively responsible for actions of the state of Israel” is antisemitic, both of which are completely correct. However, a key point within the IHRA definition serves not the purpose of fighting antisemitism, but instead serves to silence criticism of Zionism and of Israeli state policy. To classify the foundation of the State of Israel as racist is, by the IHRA definition, inherently antisemitic, thus ignoring the foundational characteristics of expulsion, racial cleansing, and apartheid against the native Palestinian population.

Thus, anti-Zionism is, according to the IHRA’s redefinition, equal to antisemitism — ignoring the legacy, from Herzl to Jabotinsky, from Ben-Gurion to Dayan, and from Golda Meir to Netanyahu, of everything from Orientalist patronization, to imposed and conscious ignorance, to advocation of expulsion and ethnic cleansing of Arabs — the same treatment afforded to the Jewish people worldwide for over three thousand years.

The definition also occasionally uses the words “Israel” and “Israelis” seemingly interchangeably with “Jewish people,” even considering them to be a class above Jewish people at large. For example, “Using the symbols and images associated with classic antisemitism to characterize Israel or Israelis” is included as its own point rather than just stating that these tropes, symbols and images are inherently antisemitic regardless of to whom they are applied. At the most basic level, any other attempt to conflate ethnic, cultural or religious identity with the ideology of a modern nation state, and to in turn pass legislation conflating criticism of state policy to hatred and racism, would not only be met with overwhelming opposition, but would be ludicrous. If Ontario were to pass legislation stating, for example, that criticism of policy in either of the split Koreas was racist hate speech against ethnic Koreans, we would see mass public outcry. And yet, when a 72 year old settler colonialist state — which our example of Korea is nowhere near being — claims to be the indisputable homeland of the Jewish people, it becomes taboo (and now, potentially illegal) to engage in any critical thought of its foundation and ideology.

To support this section of the IHRA’s redefinition of antisemitism is hypocrisy of the highest degree. In attempting to protect Jews from rampant racism, it silences the same manifestations of racism perpetuated over eight decades by a nation state in its infancy. If the IHRA claims that conflation of Jews with Israel is antisemitic (which it is), why does it fall victim to this same conflation?

Care should absolutely be taken to prosecute antisemitism in all its forms, especially as it becomes increasingly prevalent — and increasingly covert. However, the IHRA definition of antisemitism, though mostly sensible, sloppily serves to make the same associations between Jews and the State of Israel that it claims are antisemitic. The IHRA refuses to take into account progressive Jewish voices, such as those belonging to Independent Jewish Voices Canada, which has already fought and won against the implementation of this definition in Vancouver, Montreal and Calgary.

We as Jews recognize that the same structures of racism, discrimination, forced migration, segregation, and ethnic cleansing that have historically (and continue to be) used against us over thousands of years are the same structures utilized by the State of Israel to segregate, expel, and kill Palestinians. Opposing Zionism and the State of Israel as “racist” is not antisemitic, nor is it denying self-determination to the Jewish people. It is recognizing and confronting a common history that we share as comrades in arms with Palestinians: that of diaspora, racism, denial of cultural autonomy, Orientalist othering, and ethnic hatred.

Labour and progressive activists need to call on Ontario’s Members of Provincial Parliament to oppose Bill 168 and to fight for a more just definition of antisemitism.