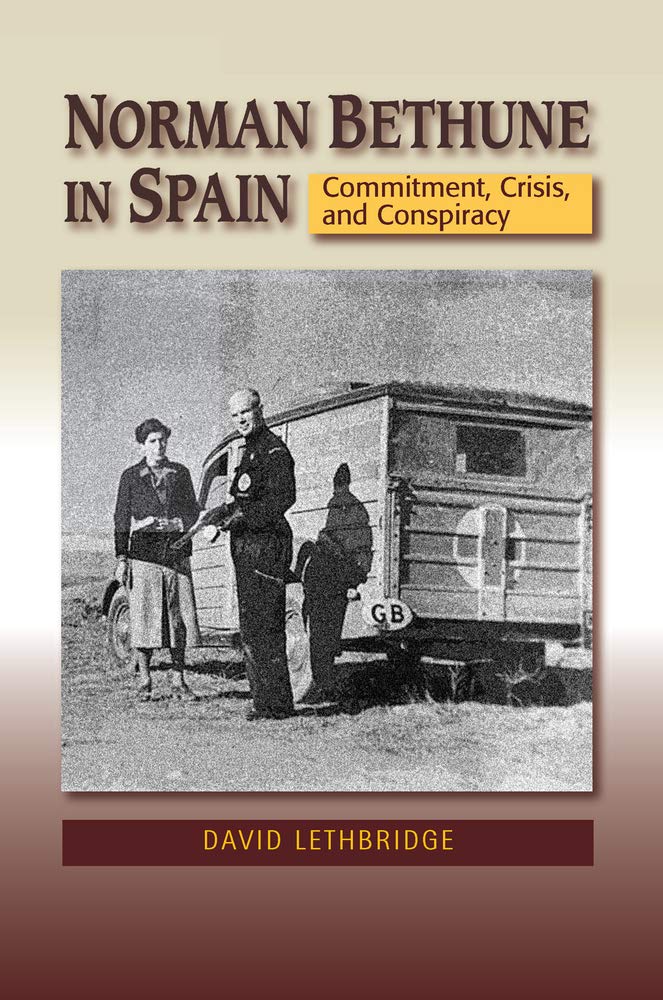 Few figures in Canadian history remain as popular as Norman Bethune. This despite a plethora of books, films and articles depicting the pioneering Communist physician and humanitarian which emphasize his alleged failings. Part of the problem lies in the origins of Bethune literature – “The Scalpel, the Sword,” the 1953 book by Ted Allan and Sydney Gordon, was based in part on Allan’s flawed personal accounts of Bethune’s time in Spain. It is, therefore, deeply unfortunate that David Lethbridge’s book “Norman Bethune in Spain” is not more widely known.

Lethbridge, a psychology professor and political activist, is one of the most prominent Bethune scholars in Canada, along with the University of Victoria’s Larry Hannant. In this book, Lethbridge combines his deep understanding of human psychology with painstaking historical research to write the definitive account of the factors which led Bethune to the battlefields of Spain in 1936.

As the book reveals, this is not the pop-culture story of a hard-drinking, womanizing doctor trying to exorcise his internal demons by undertaking a dangerous expedition into a war zone. Yes, Bethune was a deeply complex man – forced to overcome the handicaps of a religious fundamentalist upbringing by parents who can only be considered a disaster. He escaped this horror-house, eventually becoming a brilliant physician and inventor of surgical instruments, a man who could easily have enjoyed a long and lucrative medical career. Instead, after recovering from tuberculosis and seeing the impact of capitalism and poverty on human lives, he was increasingly drawn to radical and finally revolutionary conclusions. Along the way, he refused to settle for a “respectable” bourgeois life, but as Lethbridge shows (and as Hannant has also done), Bethune’s relations with women were rooted in his outlook of real gender equality, a somewhat rare perspective during the 1920s.

The heart of this remarkable book comes in the 100-plus pages on Bethune’s six months in Spain, where his brilliance and determination were the driving force behind establishing the world’s first mobile battlefront blood transfusion unit. Readers familiar with “The Scalpel, the Sword” and the cartoon version of Bethune often visualize this period as a time of alcoholic rages and affairs. Lethbridge’s research breaks down these caricatures, often on a day-by-day basis, drawing on a full range of historical accounts of a chaotic and bloody fascist war. Yes, under these painful circumstances, Bethune and his colleagues sought relief with liquor, and he certainly had an active sex life. But far more significant, Bethune spent days literally carrying to safety the badly-wounded child victims of fascist terror or fighting for the supplies and equipment needed to save countless lives. Archival film footage shows a surgeon with steady hands, not a drunk.

Lethbridge’s book also delves into the complicated and murky circumstances of his recall to Canada, where he embarked on an incredible speaking tour across the country and the northern US to raise funds for Spanish medical relief. Over 30,000 people heard his lectures, and hundreds of thousands, possibly millions, read accounts in the Communist and radical newspapers of the day. Many who heard Bethune volunteered to fight in Spain, where their heroism, tragically, could not prevent an eventual fascist victory which set the stage for World War Two.

Lethbridge carefully dissects the myth that Norman Bethune was a man driven by his passions or duped by cold-hearted Communist leaders. The picture that emerges is quite different – a man who grasped the momentous nature of a world-wide class struggle, uniting the working class of the Soviet Union, Spain, China and his own homeland in the cause of socialist revolution. For anyone who wants to truly understand the political and personal elements of Bethune’s personality, this book is essential. It’s not easy to find, but it can be ordered online and is well worth the price.