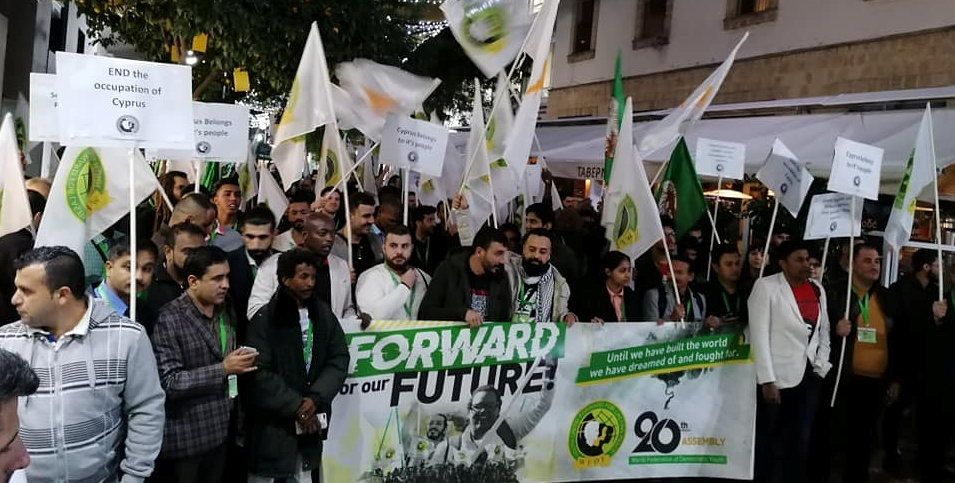 A small island in the eastern Mediterranean, at the crossroads of the Middle East and Europe, Cyprus is victim to imperialist antagonisms in the region. It is a situation that has led to 37% of its territory being occupied by Turkey since 1974.

This division contributes to making Cyprus an “unsinkable aircraft carrier,” as shown by the occupation of 4% of the territory by more than 4000 British forces which are stationed there. To add to the complexity of the case, oil deposits have been discovered recently off the coasts of Lebanon and Israel and Cyprus, which reinforces the geostrategic interest of the island.

Despite several talks aimed at reunification in recent years – on the initiative of the Progressive Party of Working People (AKEL), in particular – the nationalists and reactionaries on both sides of the “green” line of separation continue to act, objectively, in the interests of NATO and have prevented significant advances.

The general assembly of WFDY in Cyprus was an opportunity for the anti-imperialist youth of the world to show solidarity with the youth, workers and popular masses of Cyprus, both Turkish-speaking and Greek-speaking, in their common struggle for the reunification of their country. WFDY demands that this be achieved in the only democratic way possible. That is, through the withdrawal of Turkish troops and all the foreign troops present on Cypriot territory, then by the creation of a bicommunal and bizonal federal state.

With the ongoing tensions and threats of war in the Middle East, it is imperative that the Cyprus issue be resolved in a sovereign manner, without foreign interference. Cyprus must be a zone of peace, not an unsinkable aircraft carrier.

During this Assembly, the delegates were invited to a demonstration for the reunification of the country on Nicosia’s Ledras street, known for its commercial shops, but also as the “border” between the Republic of Cyprus and the puppet state of Northern Cyprus (recognized only by Turkey).