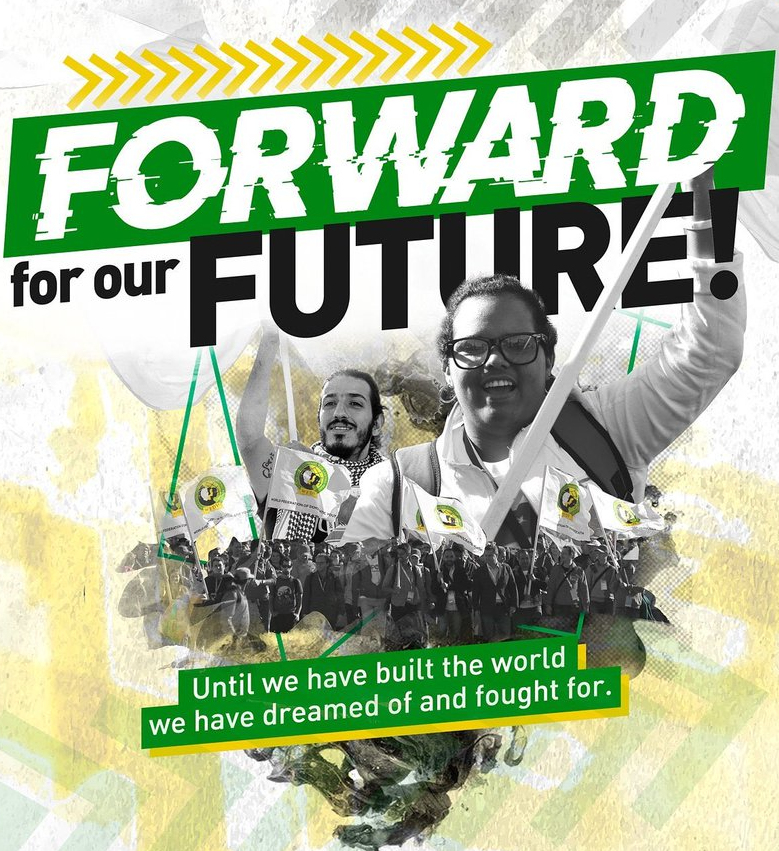 “Forward for our Future!”

From December 3-6, anti-imperialist youth from around the world gathered in Cyprus for the 20th General Assembly of the World Federation of Democratic Youth (WFDY). More than 100 young people participated, representing about 95 organizations from all over the world, including Cuba, Venezuela, Palestine, the Democratic People’s Republic of Korea and Western Sahara. The Young Communist League of Canada (YCL-LJC) was also present.

This assembly was the largest in the last 30 years, proving the vitality and the relevance of the fight against imperialism, particularly among youth, since the counter-revolution in Eastern Europe.

Delegates debated the political lines that will guide WFDY activities over the next four years. Topics discussed included an analysis of the growing aggressiveness of imperialism and anti-imperialist perspectives on the struggle for environmental justice and gender equality. The resistance of Indigenous peoples of the Americas, Australia and New Zealand received unanimous solidarity from the delegates.

In its contribution to the Assembly, the YCL-LJC noted that the meeting occurred “in dangerous times for the youth, marked by the sharpening of capitalism’s contradictions. The rise of the ultra-right everywhere throughout the world, the increased aggressiveness of imperialism, the danger of wars and the destruction of our environment are all consequences of the deepened structural crisis of capitalism. These are threats that our generation will need to overcome.”

The YCL-LJC told that Assembly, “We are sorry to say that our country, Canada, is increasingly siding with the fiercest warmongers of the world.” After denouncing Canadian international policy as increasingly aligned with that of the United States, NATO and its allies, regardless of the color of the elected government and regardless of its majority or minority status, the young communists made it clear that Canada is an imperialist state in the Leninist sense of the word.

But they also noted that this situation cannot continue forever. “We know very well that no working people, no young person benefits from imperialism in the long run. An increased number of young people are becoming aware of that. We saw it as recently as September 27, when nearly a million people (mostly young people) have been pounding the pavement across the country to defend climate justice.”

The YCL-LJC concluded that they “are fully committed, as young communists, to organizing those who struggle, to providing them with the only perspective possible: that of the overthrow of capitalism and of the construction of socialism. This is a difficult battle, but it is the most important one for our generation.”

In addition to discussing political documents, a new Federation leadership was elected. The General Council has 35 elected organizations including the YCL-LJC Canada, which was re-elected. The General Council is headed by the 10-member Coordination Council, which has two members for each regional commission. Leading organizations on the Coordination Council include the Communist Youth of Greece (KNE), the Union of Communist Youth of Cuba, the Kimilsungist Kimjongilist Youth League of Korea, the youth of the Polisario Front (Western Sahara) and the Palestinian Youth Organization. In addition, a Women’s Commission has been set up to strengthen the involvement of anti-imperialist youth organizations in feminist struggles.

The Presidency of WFDY, after being assumed by the Communist Youth of Cyprus (EDON) since 2011, is now held by the Union of Spanish Communist Youth (UJCE). This organization has a glorious history as the youth of the party of La Pasionaria, Dolores Ibarruri’s – that of the resistance against Franco’s rule and of the International Brigades.

With the unity of anti-imperialist forces as its main commitment, the Assembly worked to clearly and scientifically define this concept. This is particularly important in a period when imperialism is arming itself more and more, in order to preserve and widen access to markets, roads, natural resources and cheap labour.

Although the US – EU – Japan triad represents the main imperialist pole, the fact remains that imperialism constitutes a global system and is, therefore, not the prerogative of one country, one alliance or organization. Imperialism is nothing more nor less than the supreme stage of capitalism, as demonstrated by Lenin over a century ago in conditions frightfully similar to the one we are living in.

Fighting against imperialism on the global scale and, more importantly, in advanced capitalist countries, is not a step towards fighting capitalism. It is part of one fight against the exploitation of the working class by those who own the means of production.

The resolution from the WFDY Assembly concludes with reference to the struggle for peace. “The replacement of war with lasting peace and the peaceful coexistence of the peoples; of poverty and misery with wellbeing; of unemployment with the right of work and education for all; all these demand the replacement of imperialism, of capitalism with another social-economic system where the fundamental means of production will be in the hands of the people and where the economy is developed based on popular needs. This is the ground on which the peoples utilise for their own interest the produced wealth. Under different conditions, the interests of the monopolies will inevitably trap humanity inside the endless cycle of capitalist crisis and wars.”