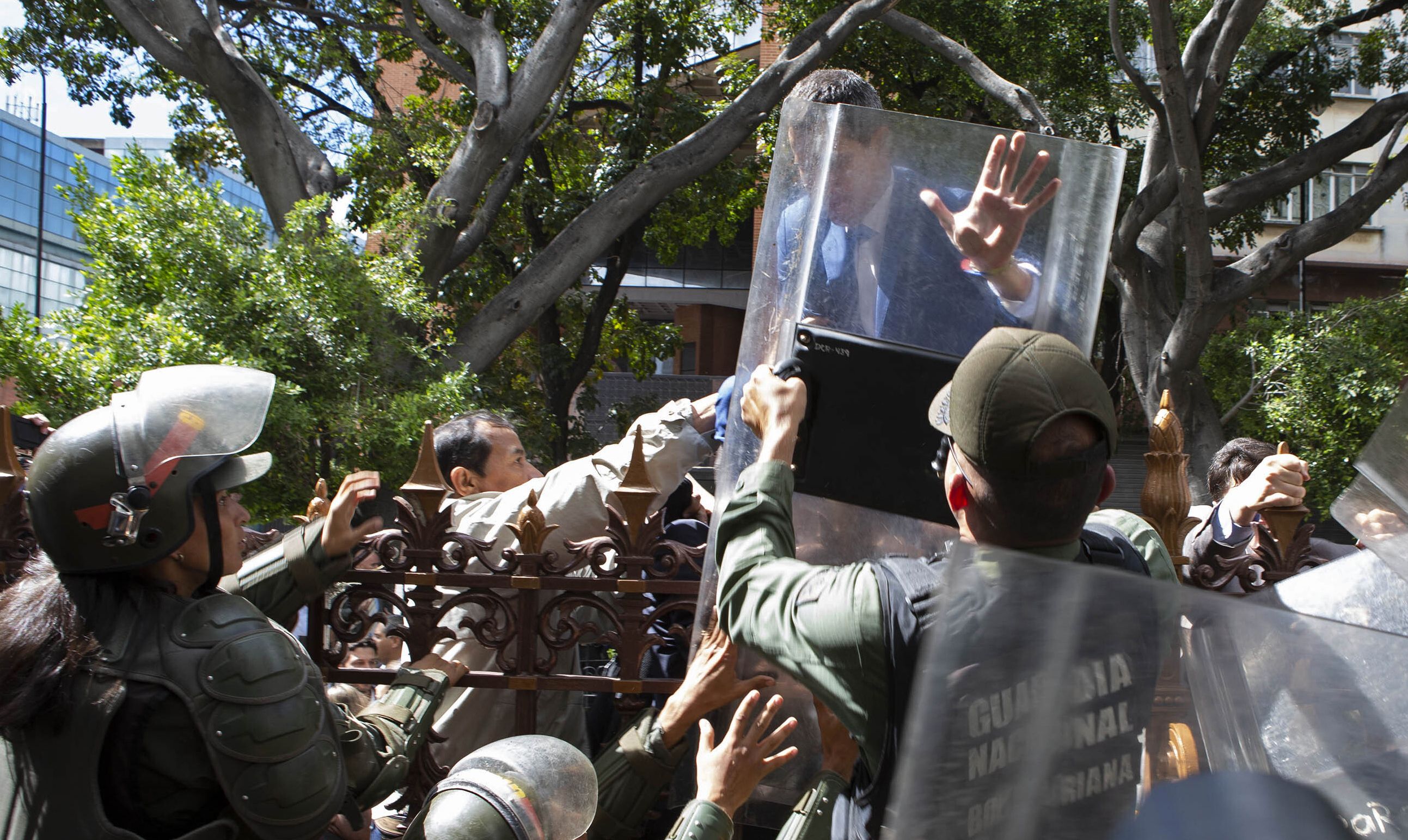 On January 5 the members of the National Assembly of Venezuela elected its new leadership, as mandated by the constitution. The new president of the National Assembly, Luis Parra, was elected by a majority vote and will replace Juan Guaidó. He is not a Chavista or a member of the governing party PSUV. That didn’t seem to be anyone’s concern – except for Guaidó who, of course, has a lot to lose. By losing the post he will lose his self-appointment to the presidency of the country.

So, what to do? Simple. Secure your domestic and foreign supporters, create a parallel body, call it National Assembly and…self-proclaim as president of the unconstitutional body! After all, that strategy worked a year ago in holding the whole country hostage, and that’s easy when your directive comes from the US imperial government.

And this seems to be precisely what Guaidó did.

It is important to remember that in 2015, when the governing PSUV party lost the majority in the National Assembly (NA), there was no cry of fraud. Instead, the right-wing that dominated the Assembly botched the opportunity to push their political agenda, by fraudulently attempting to swear in deputies. Because of that, the Assembly was declared in contempt by the Supreme Court. Back in 2015 the NA had a single declared mandate to instigate an unconstitutional parliamentary coup against the government of Nicolas Maduro. The new board of the NA appears prepared to follow its legislative mandate within the Venezuelan constitution.

Juan Guaidó has claimed that he and his party colleagues were forcefully prevented to enter the NA building in order to vote. The mainstream corporate media have propagated this lie despite video evidence to the contrary. Only one person was stopped for not having the appropriate clearance. Others, including Guaidó, could proceed. However, Guaidó chose a misguided or calculated decision of “solidarity” not to proceed. He is heard saying, “No, no, no one else will proceed until they let him [person without clearance] in.” Some of Guaidó’s deputies did enter the NA precinct.

In a dramatic and surprising development on January 7 Guaidó and his deputies reportedly took over the NA building, ousting the newly elected legislature board and its deputies. This could be seen as a coup, but it is not clear against whom the coup is directed. Since the elected president of the NA, Luis Parra, is not a member of the governing PSUV, this is not a takeover of a government controlled legislature. Furthermore, Parra was recently expelled by the opposition party Primero Justicia following mutual accusations of corruption with Guaidó. Against this backdrop, what we are seeing looks more like an internal struggle for power within opposition groups. The Venezuelan right-wing opposition has a long history of divisions and conflicts so this behaviour is not unusual – it’s just much more public.

In his first public declaration, Luis Parra promised to depolarize the country and parliament by seeking non-confrontational positions in order to achieve reconciliation. He called on the president, Nicolás Maduro, to return to the headquarters of that power and he asked the armed forces not to take sides. He also rejected any external interference and committed to only be accountable to Venezuelans. This puts him fully in a head-on collision course with Guaidó, who will not consider any other option except the total ousting of Maduro and his government. This position is fully supported by the US, the EU and the so-called Lima Group, who have all declared their support for Guaidó.

The political confrontation in Venezuela has escalated through the presence of a parallel National Assembly, composed of deputies mostly representing a narrow ideological range and a board presided by unelected Juan Guaidó, in addition to one composed of deputies representing several parties whose board was elected by all deputies present. Both bodies are dominated by members who are opposed to the Maduro government and who would favor a regime change.

Fortunately, Venezuela can still count on the Constituent National Assembly (CAN), which was established after the 2015-2020 Assembly was declared in contempt. The CAN is still the legislative body until elections for the 2020-2025 NA, which will take place later this year.

More recent developments confirm how the deep division in the Venezuelan opposition can become much more complex when the US and other countries decide to illegally intervene.

In a media conference in Caracas, Luis Parra, speaking as the elected president of the NA, appeared to favour a rapprochement with the US when he stated his “demand” that Maduro “immediately” re-establish diplomatic relationship with the US and other Latin American countries. He did not make a reference to the fact that he has been sanctioned by the Trump administration. At the same time, he asked to perform an audit for the alleged embezzlement of the $490 million that Guaidó received from USAID.

In the meantime, as of press time, Guaidó has been received in Colombia by President Ivan Duque and will meet with US Secretary of State Mike Pompeo to discuss “counterterrorism” and “counternarcotics” cooperation. This, in of one of the major drug producing and exporting countries in Latin America, which terrorizes its population with militia killings. Following his “presidential” treatment, Guaidó will travel to Davos, Switzerland for the upcoming World Economic Forum where billionaires and CEOs will gather.

While the two versions of the National Assembly push their own agenda, Maduro seems to be more solid as the legitimate president in control of Venezuela. During an interview with the Washington Post – in which he is acknowledged as “president” and Guaido as a NA “deputy” – Maduro reiterated his willingness to establish a dialogue with President Trump, “as long as it is based on mutual respect between both governments.”  It is doubtful that Washington will accept such an open invitation from Caracas.

The US typically revels in internal divisions. When none is present to be used for regime change to favour US interests, one must be created. Washington’s initial frustration about the political divisions in the Venezuelan opposition now may be coming handy. Reports from the corporate media are pushing the misinformation that Luis Parra is an ally of Maduro. Nothing could be falser, according to Parra’s own words.

Venezuelans, who have been yearning for peace and normalcy in their country, have a reason to consider themselves still held hostage by the intolerance of irreconcilable opposition groups who rely on blatant US intervention.

The legitimate government continues to work to overcome precisely the social and economic crisis that those groups, aided by foreign intervention, are causing the country.