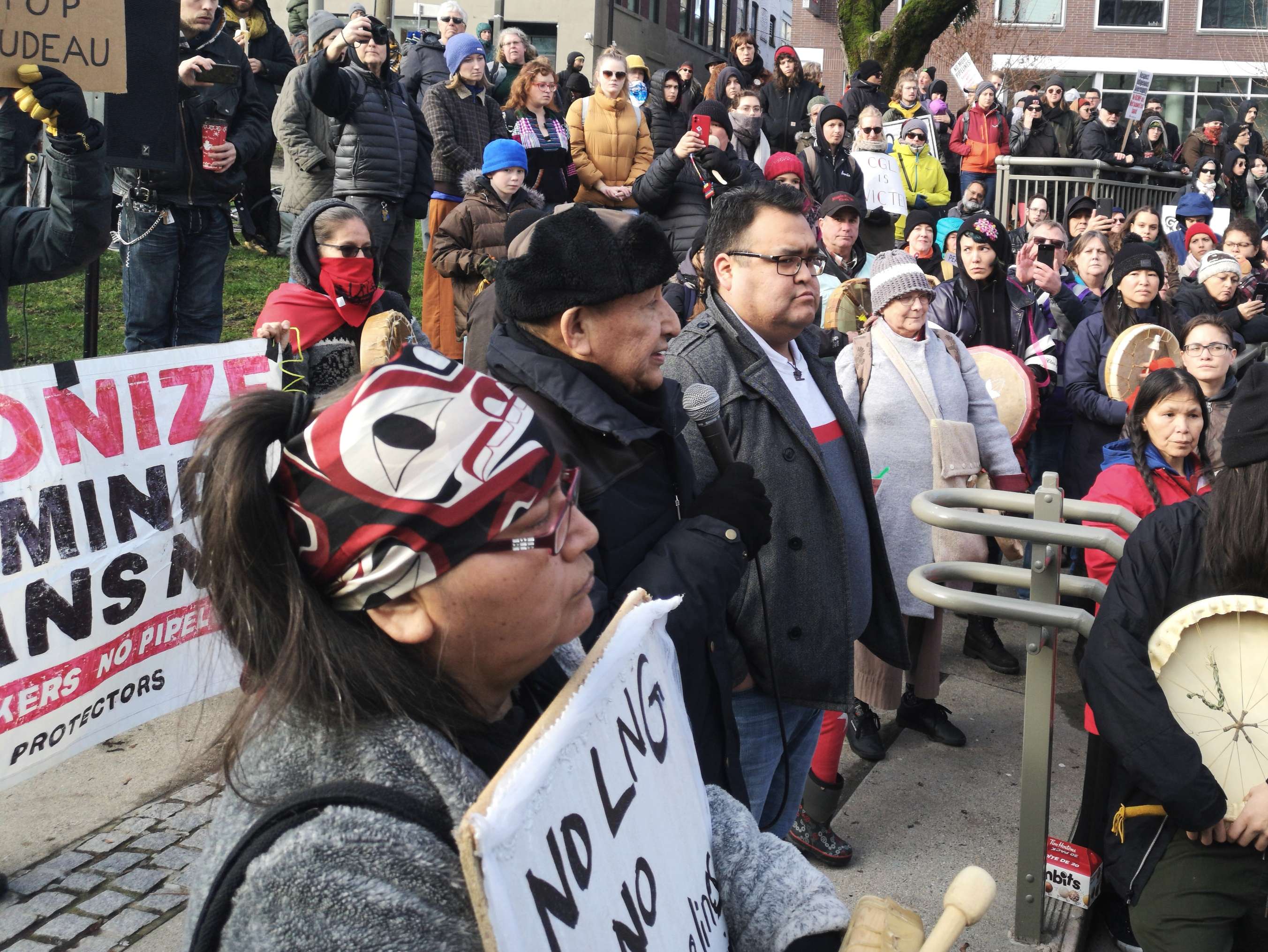 The courts and both the federal and provincial governments continue to back the drive by energy corporations to expand the extraction and export of fossil fuels in British Columbia, but resistance is also rising. Over a thousand people marched through downtown Vancouver on January 11, in solidarity with the Wet’suwet’en hereditary chiefs and members who oppose construction of the Coastal GasLink (CGL) pipeline across their unceded Indigenous territories.

Many in the crowd were environmental and social justice activists, speaking out against the pipeline which would bring fracked liquid natural gas to an LNG terminal in Kitimat. The project would dramatically boost BC’s carbon emissions in exchange for several thousand temporary jobs, and economic benefits which are impossible to predict given the current glut of hydrocarbons on global markets.

The CGL/Kitimat project puts the spotlight on the provincial NDP government’s mixed record on carbon emissions and Indigenous rights.

Elected partly in response to the former Liberal government’s abysmal stand on these issues, Premier John Horgan’s NDP has tried to satisfy corporate pressures while claiming to support Indigenous rights. The BC legislature recently became the first in Canada to pass a law to implement the terms of the UN Declaration on the Rights of Indigenous People, a move which was welcomed by every major First Nations organization in the province.

The NDP has strongly opposed twinning of the TransMountain (TMX) pipeline, which would expand the amount of bitumen from the Alberta tar sands for delivery to tankers on Burrard Inlet. That controversial project, heavily backed by the federal Liberal government, is widely condemned as a danger to coastal waters by residents of the Metro Vancouver area, and by the nearby Tsleil-Waututh First Nation.

The Horgan government had attempted to require provincial permits before heavy oil could be shipped across BC. But a January 16 Supreme Court of Canada decision upholds a BC Court of Appeal ruling that such permits would violate Ottawa’s constitutional authority to approve and regulate pipelines that cross provincial boundaries. The ruling removes one of the last legal obstacles blocking the expansion.

On the other hand, there were some hopes that the NDP’s UNDRIP legislation would bring a shift away from backing LNG expansion, such as provincial tax breaks for the industry. But Horgan now argues that his government’s Bill 41 was intended to cover the period looking forward, not projects such as the CGL pipeline which have already received formal approval.

Horgan’s position makes it crystal clear that his government will not stand with Wet’suwet’en people and allies who are holding out in -30 temperatures, defying court injunctions and the RCMP in their struggle to keep Coastal Gas Link out of their lands, the Yintahs.

A year ago, the RCMP arrested unarmed land defenders, and there are fears that a similar round of arrests could take place soon. The UK-based Guardian newspaper recently revealed that before the January 2019 raid, RCMP officers were given permission to shoot land defenders. This time around, the RCMP has created an “exclusion zone” around the pipeline route, alleging that land defenders are preparing to use violence.

As tensions build, the Wet’suwet’en Hereditary Chiefs are calling on Horgan to oppose police action. Instead, the premier has refused to meet with the Chiefs, and indicates he will support a raid on the camp in order to uphold corporate interests over Indigenous rights.

According to UBCIC Grand Chief Stewart Phillip, “We expect the provincial government and BC RCMP to honour the Supreme Court of Canada’s precedent setting Delgamuukw/Gisday’way case and the United Nations Declaration on the Right of Indigenous Peoples in all their decisions and actions. For Wet’suwet’en people to be denied access to their own territories as a result of a police exclusion zone smacks of outright racism and the colonial-era pass system sanctioned by the so-called rule of law, which our people survived for far too long.”