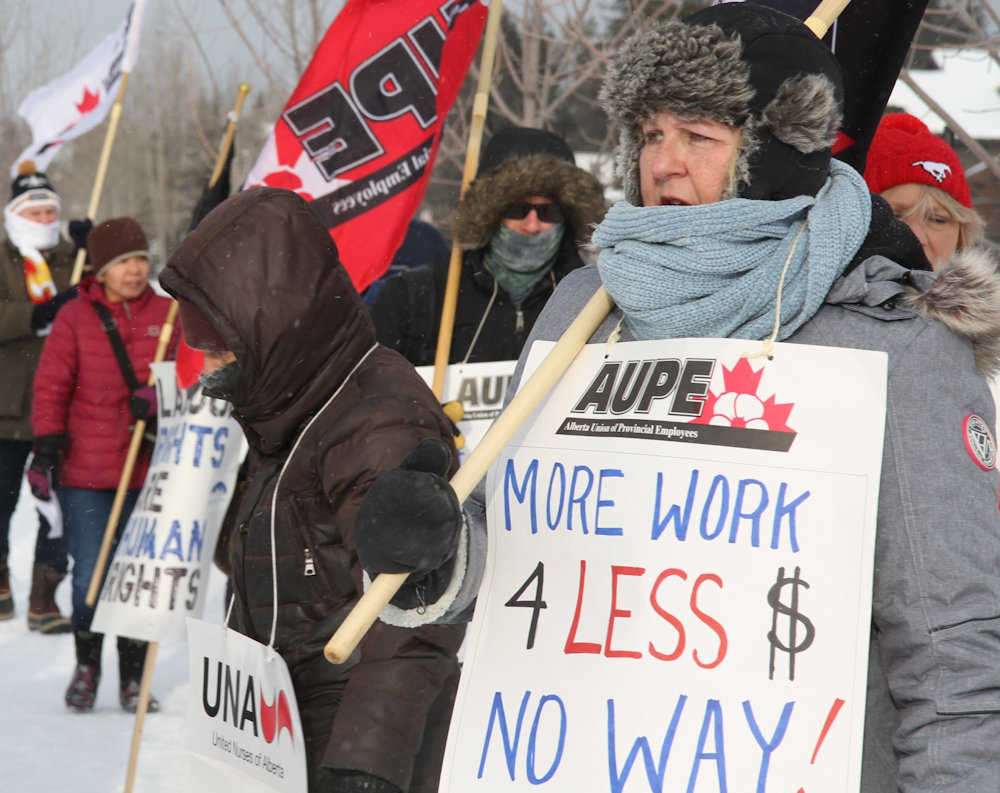 The Alberta Legislature will convene on February 25 with a new Speech from the Throne.

“At only 12% of the way though our mandate, we’ve delivered on 43% of our commitments to Albertans so far,” tweeted Alberta premier Jason Kenney on January 15. “Looking forward to another spring of renewal.”

As Albertans await a provincial speech from the throne on February 25, much of the province will likely be worried about how the far-right government’s notion of “renewal” will actually mean a deterioration of their working and living standards.

Consider that 12% of the United Conservatives’ mandate has meant a $4.7 billion tax cut to the largest corporations in the province; a $1.3 billion budget cut affecting jobs, services, and school and hospital funds; and 24,000 jobs lost in December, 8000 of them in the oil patch that Kenney and company claim to prioritize. The impact of the remaining 88% of this kind of attack dog mandate is unfathomable.

In response, the Communist Party – Alberta is promoting a plan for full employment and improved social benefits for all Albertans. It involves taking control of great reserves of wealth through nationalization of key sectors and taxation on wealthy corporations, and using the wealth to diversify the economy into new green sectors. The plan recognizes that there is no loophole in world market forces that will make tar sands profitable in the long run. It would require a great deal of infrastructure construction and re-construction but is also rich in employment opportunities.

The skill and experience that Alberta workers have gained in the energy sector can be applied to build and manufacture what Alberta needs: more public housing, a modernized transportation system for both urban and rural areas, updated energy and electrical systems using solar and wind power, processing petroleum feedstocks into finished products, environmental restoration of orphan wells, diversifying and processing Alberta agricultural products, and many other possibilities.

The Communist party points out that the Kenney government is doing just the opposite, siding with private corporations over the short- and long-term needs of the majority of the people. Placing all its hopes on a revival of the oil and gas sector that is technologically obsolete and just too expensive to compete on world markets, the UCP has put the boots to the Alberta economy.

“Beginning with a completely unnecessary tax break for the wealthiest and most profitable corporations, they deprived the provincial budget of billions of dollars. Then they used the self-inflicted decrease in revenue to justify starving education and health care, laying off thousands. They have attacked the most vulnerable by cutting AISH and various social programs.  And they are threatening to seize our Canada Pension savings to throw away on the same faith in a dying industry.”

The result has been increased deficits, job losses and uncertainty. Corporations like Encana and Halliburton, who were supposed to respond to tax cuts by generating new jobs, are instead closing down operations and moving out of the province. Not just public employees but workers in all sectors are feeling the pinch as municipalities are forced to cut back on infrastructure projects.

As the Communist Party says: “Firing people doesn’t fix unemployment. Giving billions in tax cuts to corporations doesn’t balance the budget. Cutting services, health care and education doesn’t make Alberta a better place to live, or attractive to new investors. Waiting for the next election won’t save jobs or pensions.”

The Party notes agrees that individual expressions of support are important for nurses, teachers and other public sector workers as they struggle to save their jobs but insists that united action by all unions in Alberta would be far more effective.

“We call on the members of the trades in particular to push their unions into action. The united stand of the whole union movement has worked in other countries to force governments to reverse cuts and layoffs, and it can work here.

“Workers in all sectors will have to support each other in the fight to save jobs and restore social programs. Private sector workers will see no benefits from attacks on public sector workers – only shared insecurity and shared decline in living standards. Firing nurses and teachers will not somehow create demand for pipe-fitters or electricians. It is vital that working people in Alberta fight back – in large numbers and together in solidarity!”