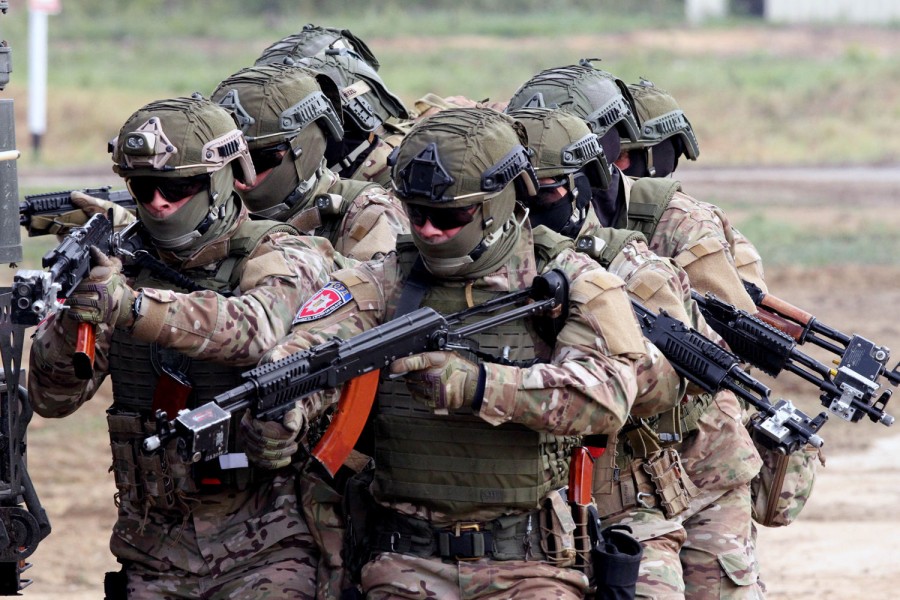 The Normandy Four talks, held in Paris on December 11 between Russia, Germany, France and the Kiev regime of Ukraine, produced not much except more of the same: vague commitments to seek peace, agreements on prisoner exchange and gas supplies, but little else.

Russia remains committed to the Minsk Agreements of 2015 and the road to a peaceful resolution of the conflict set out in those agreements, but faces weak support from Germany and France which, as parts of NATO, have a deep interest in keeping the conflict boiling to harass Russia and give NATO a pretext for moving troops there. There is even weaker support from the new Kiev leader Volodymyr Zelensky, whose commitment to peace is doubtful in the first place and who, in the second place, faces difficulties in the face of strong opposition in Kiev and from the US, whose officials met with him the day before, no doubt warning him not to agree to anything substantive the US does not like.

Instead of explaining at the meeting why Kiev has not fulfilled its commitments under the Minsk Agreements, Zelensky insisted that nothing could be resolved until security in the Donbass had been achieved. But, since it is the Kiev regime that has besieged the Donbass republics since 2014, shelled its towns and villages and assassinated its leaders, his words ring very hollow. The former comic claimed he would bring a fresh approach to Ukraine if elected but all he has brought is more of the same duplicity and ill intentions as his predecessor, Poroshenko.

President Putin, in response, warned of the dangers to the people of the Donbass republics from the fascists in the Kiev government and in the armed militias that are tolerated by it, existing outside the regular army structure.

Putin warned that if Kiev seized control of the Donbass region, massacres of the population by fascist proxy forces of Kiev and NATO were a potential scenario that Russia could not allow to happen.

Indeed, we have seen the massacre that took place in the Maidan events in 2014 when right wing, NATO-connected snipers shot people down in order to put the blame on the government forces as part of a NATO-backed coup, and the subsequent massacre of people resisting the coup by right wing elements at Odessa. The Kiev regime is very capable of committing such atrocities, and NATO of covering them up.

Evidence of this potential surfaced in November when the Danilov Letter, not mentioned in the western media, was leaked to Ukrainian social media. On 12 November, a Telegram channel called “Joker DNR” sent a PDF document containing a photocopy of a letter allegedly written by the Secretary of the National Security Council of Ukraine, Aleksey Danilov proposing a plan to deport the Donbass inhabitants once Ukraine has recovered control of the border with Russian federation.

“After the transfer of State border control to the Ukrainian Armed Forces and the National Border Service, it is necessary to immediately begin the process of reintegration and re-Ukrainianization of the population of the occupied territories of the Donetsk and Lugansk regions and their reconciliation with the other citizens of Ukraine.

In this respect, it is necessary to give residents of the occupied territories the possibility to leave the territory of Ukraine and travel to the Russian Federation to establish their permanent residence there within one month.

The following measures should be taken with regard to residents of the occupied territories, who will not want to take the opportunity to leave Ukraine after this period, in particular to determine their degree of complicity in the activities of illegal armed groups and occupation administrations.

Depending on the degree of complicity, apply criminal, administrative or educational measures to them. In order to rehabilitate the inhabitants of the occupied territories, resettle them in the central or western regions of Ukraine.

At the same time, temporarily displaced persons who, in 2014-2015, left the occupied territories and settled in the regions of Ukraine, without wishing to submit to the occupation authorities, should be granted all the necessary conditions to return to the places of their former residence.

It is these people, patriots of Ukraine, who can and will continue to restore the Donbass. They should receive all the necessary material and moral support.”

So those several million people not willing to leave their homes within one month would be forcibly transferred to the west or forced into Russia and those forcibly moved to the west would face criminal charges.

Forced deportation or transfer of a civilian population constitutes a crime against humanity under international law and under Article 7 of the Rome Statute will result in criminal liability. But the International Criminal Court has not added the Danilov Letter to its list of concerns.

For some weeks there was no response from the Kiev regime to the leak until finally Danilov posted a statement on the government website claiming it was a fake. Yet it has all the marks of authenticity, and what makes it more likely to be authentic is the claim made by a US-connected website, Stopfake, in tandem with Danilov’s claim, that it was Russian propaganda.

The chief editor of Stopfake is Yevhen Fedchenko, director of the pro-US Mohyla School of Journalism in Kiev, which served in 2014 as a headquarters of the fascists that fomented the coup.

His interests include propaganda, weaponization of information and coverage of international politics in media. In 2006-7 he was co-director of the Ohio University/Kyiv-Mohyla Academy Linkage Program, supported and financed by the US State Department.

It is noteworthy that Fedchenko is also listed as a speaker at the Aspen Institute of Kiev and that, in turn, leads, to Washington.

The Aspen Institute claims to be a forum for the discussion of ideas but, in fact, it is part of the network of disinformation organizations set up by the US over the years. When we check its Board of Trustees we find the likes of Chrystia Freeland, former Canadian Foreign Minister and now deputy Prime Minister, whose connections to the Nazis of the Kiev regime are well known; war criminals Madeleine Albright, Javiar Solana and Condoleezza Rice; and US ally, Queen Noor of Jordan.

The current chairman is James S. Crown of Henry Crown and Company, which invests in public and private securities, real estate, and operating companies. He serves as lead director of General Dynamics Corporation and is a former member of the US President’s Intelligence Advisory Board, appointed by President Barack Obama.

The Aspen Institute hosts interviews on its website of Jens Stoltenberg, the Secretary General of NATO talking about Russia as a threat, and US government officials such as Susan Rice and others. Its main focus clearly is to create propaganda against Russia and China and support of Stopfake is part of that objective.

However, despite the Danilov letter and his recognition of the risks, Putin, ever optimistic, stated: “There are different interpretations of the Minsk Agreements but there is no alternative to this package of measures. Any agreement is flexible to a certain extent, and some things written in texts may be interpreted differently by the sides. However, I agree that there is no alternative to the Minsk Agreements, and everything should be done to implement them in full.”

He stated he sensed there was a “thaw” in relations between Kiev and Russia, as shown with some recent prisoner transfers, but there can be no ultimate solution outside the Minsk Agreements, and that includes taking into account the security of the people of the Donbass, their continued future and their close relationship with Russia.

The only way forward is to resolve the conflict at the political level on the basis of the recognition of the right to self-rule and autonomy for the Donbass republics, the creation of a federal state to assure ethnic stability, and the commitment by Ukraine that it will be a neutral state and not part of any plan to “contain” Russia, a plan that can only lead to world war. But the NATO puppets in charge of Ukraine do not act in the interests of Ukraine, but in the interests of NATO, and, until that changes, peace for the Donbass remains a distant hope.

Christopher Black is an international criminal lawyer based in Toronto. This article originally appeared in “New Eastern Outlook” and has been slightly edited for length.