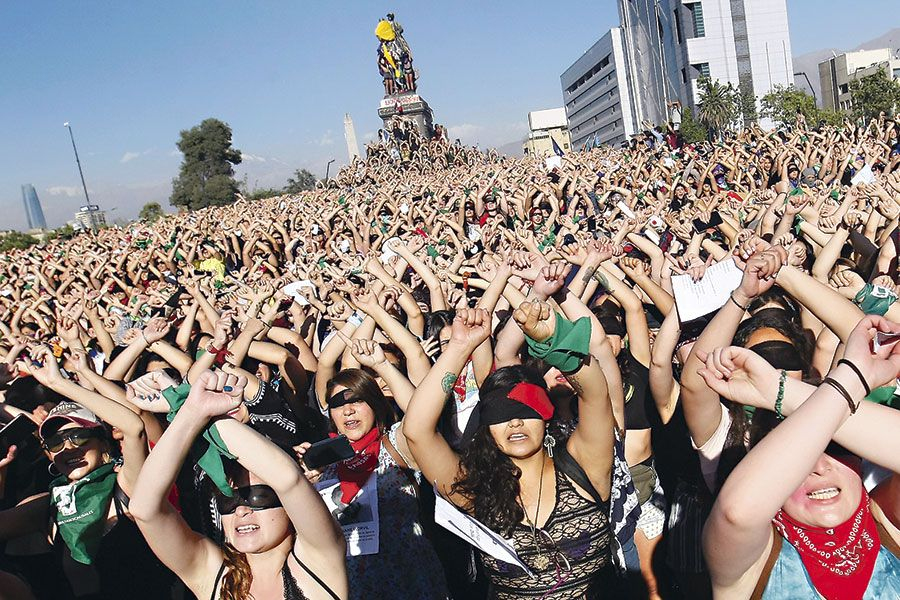 A flash mob performance piece written by a feminist collective in the Chilean city of Valparaíso has been taken up by women worldwide as a battle cry for justice. “Un violador en tu camino” (“A rapist in your path”) is an important part of the ongoing mass struggle to end Chile’s authoritarian neoliberal regime, currently personified by billionaire President Sebastián Piňera.  In less than two months the protest anthem against sexual assault, victim blaming, and state violence has spread like wildfire around the world. Flash mobs of women have performed the piece in Rio de Janeiro, Buenos Aires, Lima, Mexico City, Tijuana, Bogotá, as well as in Paris, Barcelona, Stockholm, Los Angeles, and as far away as India, Turkey, Kenya and Tunisia. A recent survey finds that to date it has been performed in 40 countries and in more than 200 cities. Performances begin with drumbeats. A group of blindfolded women assemble in a public space. The masks they wear are a reference to the countless protesters who are blindfolded by the police when they are apprehended. As the women chant the militant text (see below) they perform synchronized dance steps and illustrate their words with dramatic signifying hand gestures.

“Un violador en tu camino” was created and first produced by the Colectivo LasTesis. Its members – Daffne Valdés, Sibila Sotomayor, Paula Cometa Stange, and Lea Caceres – are young artists who acknowledge the influence of renowned feminist thinkers Silvia Federeci and Rita Segato. Their first performance in Valparaíso on November 20, with about 30 women participating, can be viewed on the LasTesis Facebook page. Just two weeks later 10,000 women, wearing masks and red scarves, performed the anthem in Santiago in front of the national stadium (a highly symbolic site given its association with the coup of September 11, 1973).  “Un violador en tu camino” is both a response to deep-rooted systemic oppression and more immediate causes. In Chile 40% of women have experienced sexual violence while only 8% of reported rapes end in a conviction. The anthem’s title, “A rapist in your path,” alludes to “A friend in your path”, the official slogan of the Chilean carabineros police force in the 1980s and 90s, and the lyrics and choreography both include specific references to the carabineros. Since the wave of protests began last October, security forces have been formally accused of 117 cases of sexual violence. For more info visit LasTesis on Facebook.

[Text of “Un violador en tu camino”: The patriarchy is a judge who tries us for being born and our punishment is the violence you now see / It’s femicide, impunity for my murderer, it’s disappearance, it’s rape / And it wasn’t my fault, nor where I was, nor how I was dressed (4x) / You were the rapist, you are the rapist (4x) / It’s the police, the judges, the state, the president, the oppressive state is a macho rapist].

A Song for Colombia

Some of Colombia’s biggest international recording stars were among 250 musicians who participated in a giant outdoor concert held in Bogotá on December 8 in support of the national strike against the government of President Iván Duque. Among the headliners at “A Song for Colombia” were five-time Latin Grammy-winning singer Santiago Cruz, as well as pop singer Adriana Lucía, ska-punk band Doctor Krápula, and pop-jazz-folk quartet Monsieur Periné, all Latin Grammy winners or multiple nominees with big followings. Claudio Narea and Miguel Tapia, from the renowned Chilean rock band Los Prisonieros, were special guest artists. The Chileans sang their iconic song of the eighties, “El Baile de los que Sobran” (“Dance of the Left Behind”) while the crowd chanted along. In Colombia, the people have taken to the streets for essentially two reasons. First, they are fed up with Duque for his failure to seriously implement the Peace Agreement process that followed the demobilization of the Fuerzas Armadas Revolucionarias de Colombia (FARC) in 2016, after decades of civil war.  Many blame Duque for the deaths of hundreds of ex-FARC fighters, social justice leaders, and Indigenous land defenders since he was elected in August 2018. At the same time, the Colombian working class is resisting a package of neoliberal measures that seeks to raise the retirement age, increase workers’ pension fund contributions, reduce the role of the state in social security, and lower the minimum wage for young people. As of late December, the protests continued while the government remained in crisis. Duque has had difficulty assembling a majority in parliament to pass his austerity measures, while his army commander-in-chief Nicanio Martínez has resigned over new revelations of military involvement in extra-judicial killings, and six more social leaders have been assassinated. Today, as before, the Colombian oligarchy resorts to violence, persecution and terror to eliminate political opposition and organized social sectors, and maintain its conservative, neoliberal project. “¡La lucha continua!”