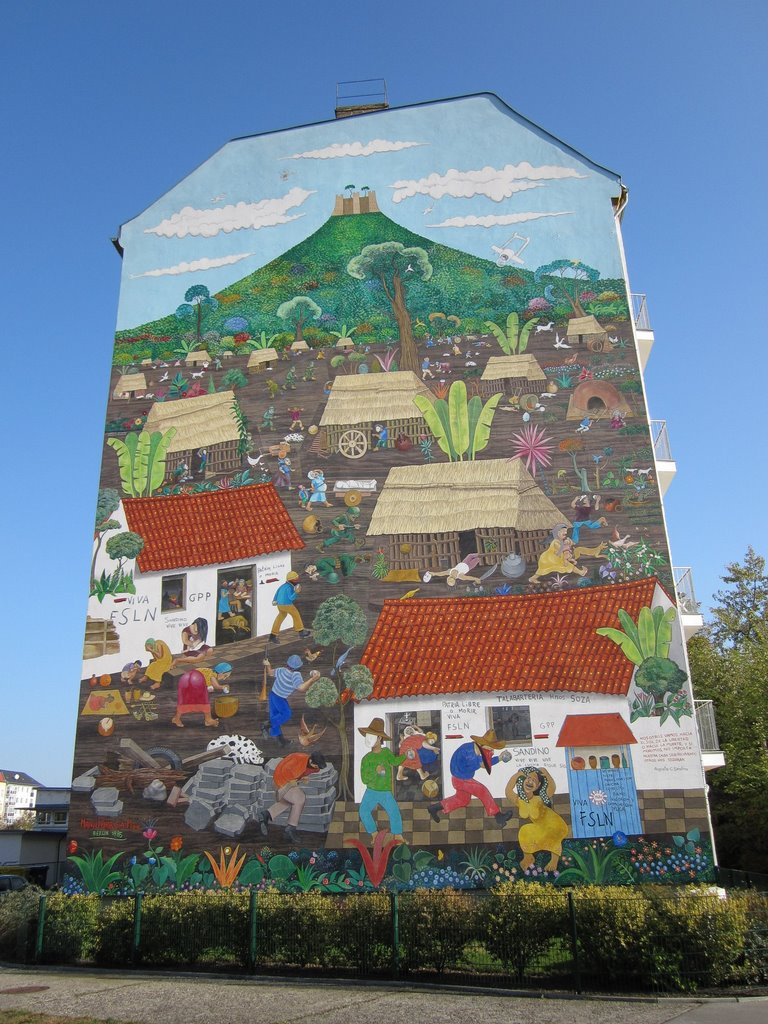 No one on Berlin’s main eastbound traffic artery could miss one of the two murals, five stories high, 2745 square feet in area, in shiny bright, red, green, yellow and blue colours up to the gabled rooftop of an older, isolated apartment building. A first glance sees an Indigenous village in Nicaragua with red-roofed huts, dogs, a spotted hog, chickens amidst beautiful tropical trees, flowers and birds in a jolly rural setting.

But take a closer look and you see the fighter plane and the armed soldiers marauding through the village, masked villagers trying to protect it, panicked mothers and children – and the corpses.

Monimbó was the first village to rise up in 1978 in defense against repression by the right-wing Somoza dynasty. It held out for a week against the well-armed foreign-born mercenaries, largely recruited in US military magazines. Though finally defeated and destroyed, it became a symbol of the revolution which drove Somoza out in 1979. Some fifty mercenaries died in Monimbó, and 343 indigenous villagers, mostly women and children.

A man born in that village became one of Nicaragua’s best painters, certainly the best in the so-called “primitive school.” After Somoza was beaten Manuel García Moia began painting his beautiful, colour-rich murals at home and then, as his fame increased, in many cities of Europe, east and west.

In 1985 East Berlin’s borough of Lichtenberg, aided by the city and the GDR Ministry of Culture (the (East) German Democratic Republic still had five years to go before its demise) commissioned Moia to paint his mural on this conspicuous site.

When the GDR collapsed in 1989 the mural survived. The building’s new private owner wanted to renovate it away but was finally won over, not without difficulty and expense, thanks to a small, highly dedicated group of active citizens.

But in 2004 the painting began to fade, and again the committee had to look for ways and means to save it, actually to reproduce it exactly by two enthusiastic progressive artists from Hamburg and West Berlin, with some assistance by the artist himself when he was able to visit. Lichtenberg, luckily, remained the most left-wing borough in East Berlin so it was possible to gain some official support and 20% of the nearly 200,000 euros required for the job. All the rest came from enthusiasts.

The job was at last completed when nocturnal fascists smeared it full of swastikas and slogans – which could be removed just in time for the re-dedication ceremonies.

Trouble hit again seven years later when the materials used turned out to be faulty and pieces of the mural crashed to the ground. Another long battle by the committee, devoted as ever, with moral support from the Nicaraguan ambassador, fought to have it recovered again, this time with better, lasting materials. The borough mayor, this time not from the LINKE (Left party) but a Social Democrat, was won over to save this bright spot in his borough; again part of the needed sum was granted, nearly half, the rest was gradually collected, and now reconstruction is again underway. On Moia’s 70th birthday in June 2006 the little square in front of the mural, with a small column explaining it and telling its history, was officially re-named Monimbó Platz. Since the mural is his largest and almost the only one to escape gentrification and demolition in Europe, the artist, who has been living for years with his daughter in Maryland, is extremely grateful. So are many other good people for whom the mural remains a lasting symbol of internationalism, anti-fascism, and hopes for a happy life in peace. 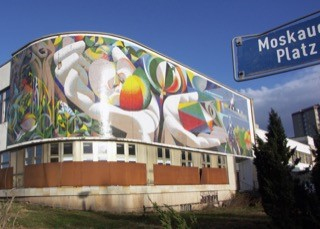 The other mural symbolizes basically the same ideals but in a very different way. Erfurt, 200 miles to the south, the capital of Thuringia, is an ancient city, first mentioned in 742 AD. It has a handsome old town, with 25 churches and a grand cathedral crowning a unique, wonderful stairway. But post-war GDR needed millions of modern homes and it needed them quickly. Using its newly-developed system of prefabricated panels, it built whole neighborhoods of comfortable, extremely low-priced apartments, well connected by cheap city transportation, provided with new schools, child care and sport facilities, clinics and cultural centers, soon improved with trees, shrubbery, playgrounds, but with one weakness – their sameness. Also, in Erfurt.

A number of sculptors and painters worked to overcome this; a leading light among them was Josep Renau (1907-1982).

Born in Valencia, where he studied at the art academy, Renau became an active leftist, joined the Communist Party and, when the fascist putsch began in 1936, he joined in making the famous posters supporting the Republic. Put in charge of the Spanish Pavilion at the World Exhibition in Paris in 1937, he was able to encourage and then exhibit Pablo Picasso’s passionate, startling “Guernica” mural.

After the defeat of the republic Renau escaped to Mexico, where he worked with the great Mexican painter David Alfaro Siquieros.

Invited to the GDR in 1958, he soon began work on his remarkable murals, almost as colourful as those of Moia but with bold, modern, partially abstracted forms which did not always conform to some administrators’ clichéd ideas of the officially-approved “socialist realism.” In spite of such attitudes, he became most noticeably successful with a series of murals, some vertical, some horizontal, always big and eye-catching, for a new city, Halle-Neustadt. It is still a goal of art lovers’ pilgrimages.

Old Erfurt also wanted such a bright attraction for its new high-rise housing areas and commissioned a mural by Renau for a big new cultural center. Called “The Relationship of Humans to Nature and Technology,” it shows two large hands, one with an apple, the other a many-sided geometric object, surrounded by symbols and urging a symbiosis of both elements in building a better world. It was composed of 70,000 coloured glass mosaic tiles, each about one-inch square, and together full 7 meters tall and 30 meters in length (c.22 x 100 ft.) – truly an impressive sight! Sadly, Renau did not live to see its completion.

Many GDR works were discarded or destroyed after 1990, but the Erfurt mosaic (and the Halle-Neustadt murals) survived. But in 2012 the cultural center – like nearly all of its kind – received a death sentence. It was replaced by a shopping center, which saved the city costs and brought money into the pockets of persuasive new owners. As for the Renau work, due for demolition, it was again a small group of devotees who managed to rescue it – but only after it was sawed into many sections, put away in a storage building and almost forgotten.

But those who loved it did not forget it. It took them years before they finally found art-loving sponsors, including one wealthy foundation, who agreed to revive it – an extremely difficult job, requiring exact studies of the correct mortar, the mechanical nature of a new base, the colours and how to replace broken tiles.

It took four years, but this month it was finally achieved – bringing a huge sigh of relief for its supporters, regained beauty for Erfurt, and a breath of new hope to some for a better world of genuine progress and lasting peace.

[Victor Grossman is a long-standing US activist based in Berlin, and the author of A Socialist Defector: From Harvard to Karl-Marx-Allee, published by Monthly Review Press.]