When is an NGO not an NGO? Certainly, when it is Washington’s National Endowment for Democracy, founded in 1983 by Ronald Reagan, generously funded by Congress, and enthusiastically boosted by the likes of the Washington Post, the Clintons and the AFL-CIO through its Solidarity Center.

Set up, according to its founders, to carry on work previously assigned to the CIA, the NED has rarely seen a radical government it didn’t want to destabilize. Of course, the Endowment doesn’t declare itself to be in the business of overthrowing regimes deemed troublesome by its paymasters.

Rather, it openly offers material aid to democratic players struggling against totalitarians. Or that’s how Carl Gershman would put it, NED’s only-ever leader and one-time assistant to Cold Warrior extraordinaire Jeane Kirkpatrick. Professor Kirkpatrick, for those who don’t remember, was Reagan’s Ambassador to the United Nations and prior to that, a (Democratic) academic who impressed her future boss with an essay explaining why right-wing military juntas were preferable to left-wing movements in power.

In short, the professor provided intellectual cover for backing the Contras against the Sandinista government in Nicaragua while supporting the ruling oligarchy in El Salvador – as the latter slaughtered peasants, union organizers and Catholics true to the Gospel.

Carl Gershman remains in a less brutal version of the same business in 2019.

But would you know that from reading the NED’s description of its activities in the Hong Kong Special Administrative Region? The AFL-CIO’s Solidarity Center is one of four “core grantees” of NED funding. This very official NGO works to “expand worker rights,” for example, “and promote the development of civil society in Hong Kong. The Center [supports] parties to strengthen the capacity of trade unions, including migrant and domestic worker unions, to organize, bargain and advocate for better protection for workers and to raise public awareness and promote public participation in worker rights issues.”

Who knew that Washington was so passionate about social democracy beyond America’s borders?

Long before “influencers” took over YouTube, NED had blazed a path in the persuasion field. Some six years ago, Voice of America interviewed the Endowment’s Vice-President of Programs for Asia, the Middle East and North Africa, one Louisa Greve; it seems that NED had, starting in 1994, already pumped several million dollars into Hong Kong. Then in 2018 alone, some $200,000 went to the HKSAR’s “democracy activists” through the National Democratic Institute and another $155,000 via the Solidarity Center, topping up almost half a million tagged to the latter organization in the 2015-17 period.

Reports suggest that end recipients of money in the HKSAR include the Hong Kong Confederation of Trade Unions, the Labour Party and the Democratic Party.

According to the Hudson Institute’s Michael Pillsbury, funding to the local opposition through NED has been of sufficient quantity that Chinese accusations of Western “dirty hands” (in the words of China’s Foreign Minister Wang Yi) in the 2019 protests are “not totally false.”

If this isn’t enough, Chinese media have diligently documented physical encounters between anti-Beijing activists, US consular staffers and leading politicians. We have Martin Lee of the Hong Kong Democratic Party with US Secretary of State Mike Pompeo. Vice President Mike Pence greeting the patrician liberal Anson Chan. Julie Eadeh of the American consulate in Hong Kong together with Lee and Chan, and then with Joshua Wong, poster boy for the 2014 “umbrella protests.” Photos of this sort crowd the Web.

Media have also highlighted entrepreneur Jimmy Lai’s visits to Washington and the connections of his close associate Mark Simon to the CIA – an agency with which Simon interned and which employed his father for 35 years (information publicized not by communist papers but by the South China Morning Post). Lai is a generous distributor of cash to opposition forces in the HKSAR.

Perhaps more interesting than the gotcha photos are the dubious, self-serving declarations of leading Democrats and Republicans regarding current events in the city. For example:

“We can’t ignore Beijing’s failure to respect the rights and autonomy of Hong Kong’s people and the Hong Kong government’s excessive force against peaceful protesters,” declared Kamala Harris in August.

Beijing “has eroded key democratic institutions.” That from Senator Elizabeth Warren, in Foreign Policy in October.

“Full support and admiration go to those who have taken to the streets week after week in non-violent protest to fight for democracy and the rule of law in Hong Kong.” That’s House Speaker Nancy Pelosi in October. 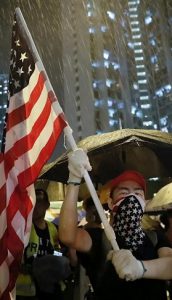 “What’s happening in Hong Kong is not simply China’s internal affair. The US…[is] not watching from the sidelines,” Senator Marco Rubio said. (At least here we have a reasonably frank declaration of the American role.)

Assertions of Beijing’s recent perfidy are legion in the Western media but are rarely backed up. Students in my writing classes at an elite Shanghai school would receive poor grades if they submitted such work – broad claims without supporting evidence. Why do intelligent people argue this way?

They do so because, given their aims, they have no choice. There is no evidence that China has in any substantive way encroached upon Hong Kong’s liberties. As Sourabh Gupta, Senior Fellow at the Institute for China-America Studies has written, the HK and central governments have “scrupulously adhered to ‘one country, two systems’ throughout the protest period.” Western critics’ objective is not to prove a case but to “stir the pot and thereafter fan the flames of protest by providing oxygen to the worst political and militant elements within the…movement.” This includes praising or giving a smiling pass to those who: stab and beat pro-China individuals; erect roadblocks to stop cars and sift through drivers’ and passengers’ private effects in order to determine which side they’re on; and set shops, offices, and metro stations ablaze. In other words, criminal bullies.

Evidence of Beijing’s “meddling” that one does come across is the alleged arrest and detention of several Hong Kong booksellers in the period between the 2014 demonstrations and the protests of this past summer. And these cases do deserve consideration.

But they’re far from conclusive.

Lee Bo, described in the local press as a major shareholder in Mighty Current Media – a publisher specializing in gossipy reports on the Chinese elite – went missing at the end of 2015, but then turned up in Hong Kong and denied that he’d been coerced, saying he went to the mainland voluntarily to assist legal investigations. Lam Wing-kee of Causeway Bay Books – owned by Mighty Current Media – reports that he was arrested when he tried to enter Shenzhen, the booming mainland city next to Hong Kong. He was held for eight months and accused of sending banned books to the mainland. But Lam was also allowed to return to the HKSAR, reportedly to gather material for his case and get customer lists! There, not surprisingly, he stayed.

And then there’s Mighty Current co-owner Gui Minhai, a Swedish citizen. He appeared on Chinese television in 2016, declaring that he had turned himself in to authorities over a deadly hit-and-run accident on the mainland from which he had fled years before. Gui’s daughter suggested that Chinese police snatched him not from Hong Kong but Thailand, and not for driving offences, according to the Hong Kong Economic Journal (ejinsight.com).

In July 2016 the Journal further reported that Wang Jianmin and Guo Zhongxiao had been given jail terms after pleading guilty to selling illegal publications to mainland readers. They are described as permanent residents of Hong Kong but were arrested at their homes in Shenzhen.

These are, in short, bizarre cases that raise questions about police conduct and Chinese censorship law, but they fail miserably as proof of an assault on Two Systems. Life in Hong Kong, full of vociferous criticism of China and regular anti-Beijing processions, refutes the Chinese Communist Party’s Western and local critics on a daily basis.

But China and Hong Kong still have a substantial problem. And for all its meddling, NED isn’t the root cause of the city’s strife. (See my previous People’s Voice story on the issue and the social crisis that has aggravated it.) Washington applies bellows to the fire, but the Pences and Pelosis are only secondary arsonists.

In addition to forcing the Hong Kong government and the elite it serves to collaborate in reducing the city’s extraordinary inequities, the Chinese Communists must begin a thoroughly honest conversation with the youth of the HKSAR…as well as with those far-more-numerous young women and men on the mainland.

For a key issue is history. Young Hong Kongers have been taught that they are, if ethnically Chinese, culturally mixed and politically occidental. They have learned to look West. They (obviously) tend to distrust “socialism with Chinese characteristics.” Is it enough to offer them an economic argument, to the effect that their city’s future lies with the dizzily-developing country above them, rather than with the romantic, crumbling West? That if they learn to take advantage of opportunities in Guangzhou and Shenzhen, they’ll get rich and all will be well? Probably and hopefully not.

What is needed is a “deep and illuminating” education, in Gupta’s words. One that coolly exposes what is bad and what is good in the colonial legacy. One that honestly acknowledges the errors and crimes of the socialist period but relies for its weight on this indisputable truth: that the Chinese Communist Party has known how to correct great mistakes, shift course and help lift over half a billion people out of grinding poverty. That the capitalist West has nuggets of gold to offer, as China has so well understood, but is no political or socioeconomic model to emulate in 2019. That deeper, real democracy needs a new economic garden in which to grow.

This means frank and truthful historical instruction, rather than either an imposed “patriotism” or liberal, neo-colonial nostalgia.

For when Chinese youth wear Union Jacks on their backs while calling for Donald Trump to free them, you know that their main fault is ignorance.