After observing this summer of mass discontent, those who wish China’s Hong Kong Special Administrative Region well can draw a few conclusions.

This exercise begins superficially with some reflections on the protesters’ explicit demands. “Superficially” because the claims made by those marching in Hong Kong’s streets and setting them ablaze may not fully explain the underlying causes of the crisis.

The facts about the extradition legislation

The catalyst for the protests was proposed legislation that would permit Hong Kong to transfer criminal suspects to jurisdictions with whom it has no extradition agreement. It does not seem to have been prompted by Beijing’s desire to fling critics of socialism with Chinese characteristics into the dank cells of the mainland. Rather, there was good reason to think that a young man had murdered his girlfriend and left her body in a Taiwanese park before fleeing to a place from where, it turned out, he couldn’t be removed to face justice. Hong Kong had no extradition pact with Taipei.

Hong Kongers uncomfortable with the politics and judicial practices of the People’s Republic immediately saw the bill’s implications. The SAR would no longer be a guaranteed safe haven for individuals pursued on the mainland. But the pointed question critics of the legislation ought to answer is this: Is it reasonable that one commit acts of fraud in Guangzhou, bribery in Harbin or rape in Shenzhen, and then evade those cities’ courts, provided one can get back to Hong Kong, a part of the same country as those named municipalities?

In June, after huge protests, Chief Executive Carrie Lam declared the bill “dead” and offered a fulsome apology. It remains unclear what precisely she was apologizing for, but Lam’s retreat made it immediately apparent that she was sensitive to and respectful of the populace’s feelings.

But government opponents smelled blood. Why settle if you can press the battle further? The legislation’s demise was insufficient; there had to be a guarantee that it would never return in a revised version. In other words, nothing less than a concrete judicial wall between the SAR and the rest of China would do. One Country Two Systems indeed!

On September 4, Lam announced that the legislation had been definitively withdrawn.

Numerous Hong Kongers argue that PRC courts can’t be trusted to reach just decisions. As they speak, an African-American man named Alvin Kennard is released from an Alabama prison after serving 36 years in jail for robbing $50 from a bakery. Yet there are no reports in the city of popular uprisings also being spurred, then or now, by Hong Kong’s 1997 extradition agreement with the United States. None are expected. Protesters obviously have a particular kind of judicial injustice in mind; their grievance is Beijing-specific.

Demonstrators want an independent enquiry into the actions of the Hong Kong police, accusing them of using excessive force. On September 4, Lam announced, “The government will fully support the work of the Independent Police Complaints Council…I pledge that the government will seriously follow up [on] the recommendations made in the IPCC’s report.” 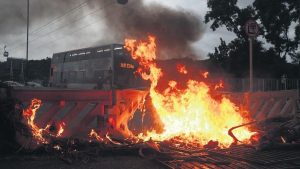 Certainly, leftist publications should be wary of defending a police force for its treatment of demonstrators, unless that treatment is absolutely exquisite. Hong Kong has seen gas and rubber bullets. But honestly and relatively speaking, is there any phrase other than “notable restraint” to describe the Hong Kong police department’s reaction to Molotov Cocktails, arson, refusal to accommodate other people’s need to travel through the city, and flagrant attempts by protesters to destroy public infrastructure?

Imagine an enraged crowd taking over the US Senate and defacing its walls and symbols; who doubts that bullets harder than rubber would be fired back?

For additional comparison, think of France’s response to the Yellow Vest movement. Just two months after those demonstrations began, almost 100 serious injuries – including 15 cases of eyes lost – had been reported. The publication Libération counted 77 serious head injuries. One participant in the June 2 “March of the Mutilated” in Paris was a man whose hand had been ripped off by a grenade tossed by police.

Meanwhile, as of early September, one Hong Kong woman had sustained an eye wound that didn’t appear to have produced blindness, according to a hospital announcement. On September 4, scenes of a young man suffering what was feared to be a spinal injury appeared on television. Many more individuals – perhaps hundreds – have of course been hurt in the months of clashes. The Hospital Authority reported that 45 people received treatment after clashes between police and protesters on August 11, with two in a serious state.

The contrast between injury results in the cradle of human rights and the Chinese Special Administrative Region is not insignificant.

Demonstrators do not want the words “riot” or “rioters” affixed to their actions or persons and believe those arrested should be released. Many of the young people building barricades and setting transit stations afire, flattered by Western media and foreign politicians, seem oblivious to the fact that violence has costs. When they see that it does, they are offended.

The protesters do want “universal suffrage.” But they cannot, of course, be calling for a return to pre-1997 days – Britain never bestowed

democracy of any sort on its colony until the final days of its mandate. Indeed, when it comes to voting, citizens of the SAR have been far busier casting ballots since the inauguration of One Country-Two Systems than ever before.

But like other electoral systems, Hong Kong’s is a managed democracy. Out of 70 seats in the Legislative Council, 35 are elected directly by voters in geographic ridings. Thirty of the rest are “functional constituencies” (FC’s) representing sectors and professions. Five more are elected by citizens not represented by any FC – but the only candidates for these seats are themselves members of District Councils.

In other words, Hong Kongers have something of a one-person, two-vote system.

Contrary to the complaints of many liberals, there is nothing inherently undemocratic about a legislature that includes delegates from production’s assorted sectors. But who selects them and what’s the numerical balance? A review of the 30 Legislative Council “functional members” shows that critics are right to suggest that the system is inclined to bolster business interests. While organized labour has three seats, finance has one, financial services another, insurance another, import and export another, real estate and construction another; commercial has a seat; textiles and garments get their own; IT has a member. There’s one for law, another for accountancy; engineers have one, tourism sends its member… The reader gets the picture.

Of arguably equal significance is the fact that the Chief Executive, currently Ms Lam, is selected by a committee of 1,194 voters, including legislators and influential figures from civil society. This irks many Hong Kongers, who want a Chief Executive directly elected from candidates not vetted by Beijing.

For its part, Beijing has shown itself willing to fulfill the Basic Law’s promise of direct CE elections, while seeking to maintain control over what names appear on the ballot.

Inequality at the root

So, is abstract hostility to the People’s Republic of China and love for pure liberal democracy capable of drawing millions into the streets over a period of months? Surely not.

For years, the media has crooned over Hong Kong’s success; despite this, it’s a place where huge numbers have been left behind. Housing in the city is now, possibly, the most expensive in the world. Andrew Sheng and Xiao Geng report that per capita residential space here is now 16 square metres, compared with 36 in Shanghai. I know of young professionals earning good salaries who can’t escape the crowded quarters they share with friends and cockroaches.

And then there are the poorest, housed not in apartments but veritable boxes.

Writing in the latest issue of Made in China, Jake Lerner notes that in 2017 the city’s leading five “tycoons” took home some $3 billion USD in untaxed dividends alone. Meanwhile, median incomes for new graduates in that year were 10 per cent lower than in 1992. Wages for the majority have been stagnant for years.

“[Employees] in Hong Kong endure the longest working hours of any global city,” he adds, a problem that hasn’t been legislatively addressed due to business opposition.

“Hong Kong’s protesters believe they haven’t been heard,” write Sheng and Xiao. “But it is the city’s own elites, not China’s government, who have failed them.” Yet this evaluation glosses over the fact that Beijing’s strategy in the SAR has been precisely one of cultivating those elites, of cementing the PRC’s relationship with the region precisely through support for its moguls and by not interfering with their agenda. Former Hong Kong resident, editor of Marxism Today, and high-profile China watcher Martin Jacques noted in January of last year, the Party’s error has been to “emphasize two systems too much, and one country not enough.”

Huge numbers of Hong Kongers associate the Chinese Communists with the barons who hoard land and keep it out of the housing market in order to drive up property values and rents. Beijing’s scrupulous attention to the detail of the handover agreement, its meticulous respect for Hong Kong’s “difference,” has bitten it on the behind on the eve of the 70th anniversary of the People’s Republic.

What’s needed is a bit more communism – that respects the SAR’s civil liberties and legal system. While some right-wingers and liberals who pine for Hong Kong’s colonial past – or imagine a contemporary romance with Washington – will not be satisfied, China can begin to win back the friendship of the city’s masses by being the majority’s friend. If Ms Lam can’t coordinate that shift to the left, someone else will have to.