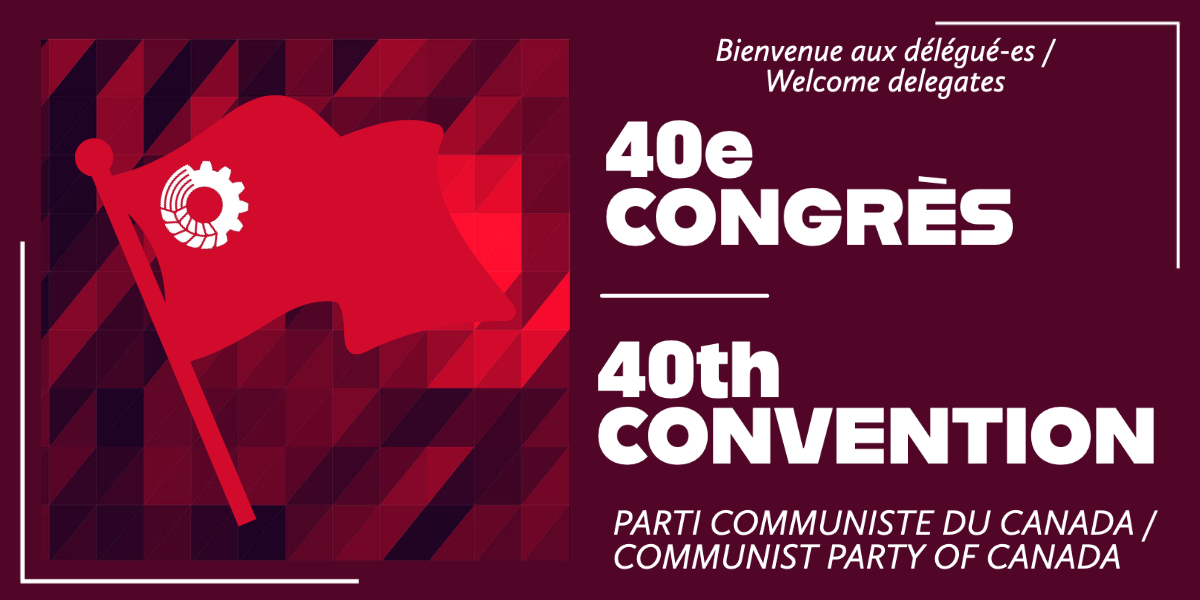 Over the Communist Party of Canada’s 101 years of existence, conventions have ranged from small (in May 1921 just 22 delegates met secretly to form the party in a barn in Guelph), to large and loud. The 40th Central Convention opened on July 1 in Toronto, under threats of disruption from a small faction conducting a social media campaign urging the destruction of the Party.

By the afternoon of July 3, the 46 voting delegates from across the country had decisively rejected that attempt. The CPC’s incoming leadership was elected with very high levels of support, and delegates adopted a Draft Political Resolution to guide the Party’s collective work in the period ahead. As re-elected leader Liz Rowley said in her closing remarks, it was a successful and united convention despite the difficult conditions.

During the first day of debates, delegates held a frank, self-critical discussion on a case involving a Party organizer who was disciplined for sexual misconduct and later resigned from the Party. After lengthy discussion, a motion was adopted (unanimously in favour, with one abstention), stating that while there were “serious communications breakdowns” between the leadership and the organizer’s club in reporting the reasons for the discipline, “there is no evidence that Central Executive or Central Committee members ever protected or covered up for predators.”

The resolution instructs the incoming CC to “establish a specific and detailed policy against sexual misconduct, including a clear mechanism for members to take action on such cases, and to undertake more systemic training and education within the Party on norms of behaviour expected of Party members.” The draft policy will be discussed by clubs before adoption, and the CC will report to the next Convention on its implementation.

A second motion was passed with 42 votes in favor, 2 opposed and one abstention, supporting the expulsion of four people for spreading false accusations about this case and intimidating party members on social media platforms.

The Convention’s second day was focused on the dangerous drive to war in Europe and Asia by US imperialism, backed by the Canadian government and Parliament. As the Political Resolution notes, the growth of anti-communism and militarism have sidelined the fight against climate change and the global pandemic.

Delegates spoke about their work to build the peace movement, and to move the labour movement into action on these decisive issues.

They also talked about the political situation in Canada, including the danger posed by the Conservative Party and the far-right, acting for the most reactionary sections of monopoly capital. There was extensive discussion about the state of the popular fightback across the country, and about the critical role of the Communist Party, which has seen important growth since the previous Convention, especially during the pandemic years.

Delegates strongly agreed on the need to ensure that new applicants fully understand the Party’s policies and organizational process before being invited to join. There was also an in-depth discussion about the importance of steering revolutionary-minded young people to the Young Communist League, where they can learn about Marxist theory and practice. Experience has shown that dual membership in both the Communist Party and YCL is a heavy burden, leading many young people to abandon one or the other organization, rather than graduating from one to the other.

On July 3, a new Central Committee of 28 members from across Canada was elected, including both veterans and newer members. A Central Executive comprised of 7 members was also elected, as was the leader of the Party, Liz Rowley.

As delegates sang the Internationale to close the Convention, they stood strong and united, ready to resume the struggles for peace, for climate justice, for the people’s health and rising wages and living standards, and for fundamental change and socialism – the raison d’être of the Communist Party of Canada.