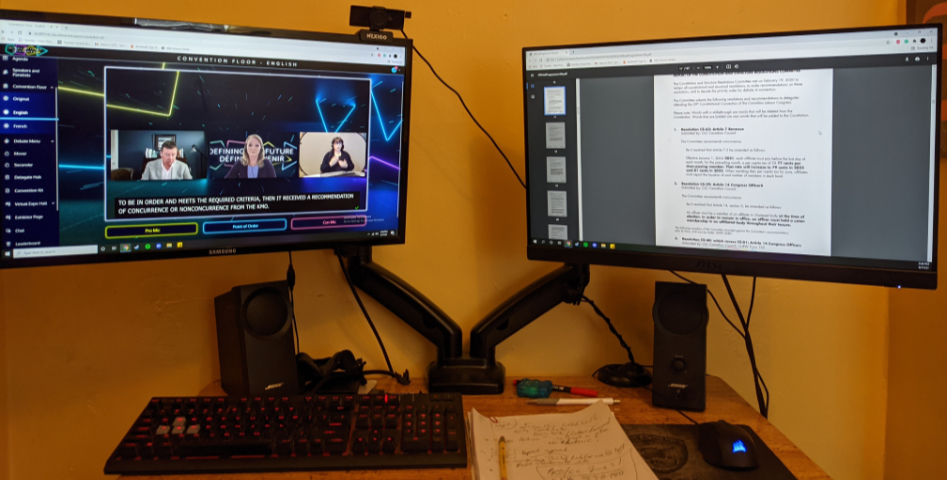 From June 15 to 19, nearly 4000 delegates met online in the first ever “virtual” Canadian Labour Congress convention. With less than 15 hours of floor time in total, union leadership and delegates maneuvered in lightning-round debates to get their views across and secure their objectives.

Ironically, though, the most significant result of this convention was not in what happened – but in what did not happen.

The worst constitutional amendments, proposed by the largest unions, were either defeated or procedurally blocked from being dealt with. Much of the credit for this goes to the work of the Action Caucus and local labour council presidents. They feared the impact of amendments which would permanently reduce participation in future convention by thousands of delegates or remove from union locals’ ability to democratically chose their own delegate free from the control of their national union HQ.

Prominent unionists such as Carol Wall, who challenged Ken Georgetti for CLC leadership in 2005, strongly criticized the undemocratic attempt by national unions to consolidate their power at the CLC, at the expenses of smaller and more autonomous local bodies.

Wall warned that “increasing control and centralization in these hands alienates and pushes out activists from the labour movement and they then put their energy into local grassroots movements rather than their union local.” She added that workers “need genuine debate on the floor of convention.”

Her position is similar to the orientation of the Action Caucus, which has a strong history and clear perspective on trade union democracy and its importance to class struggle.

The virtual meeting format presented almost no opportunity for delegates to mingle between debates, during intermissions or in the evenings. Consequently, the themes and tensions were relatively muted and lacked the time or space to flourish into fully coherent narratives. Policy papers contained few actions away from a lobbying, parliamentary and electoral focus. This made the convention’s “wins” – in preventing the draconian move to reduce democracy – all the more significant.

Notably, the right wing was divided at this convention, with a definite tension emerging between those attempting to restore the NDP as labour’s sole voice and those leaning toward the Liberals. The first approach was reflected in the “Team Unite CLC” candidate slate, which energetically urged the Congress to realign its political work in support of NDP electoral gains. Pushing against them were unions advancing the so-called “non-partisan” approach that has brought the CLC ever closer to the Liberals, in pursuit of mutually agreeable policies – this group included the sunsetting leadership of Hassan Yussuff.

While these two forces may appear to be opposed to one another, they are in fact two sides of the same right-wing coin – one is the face of the right-wing NDP, and the other is of right-wing social democrats in bed with the Liberal government.

Directly opposing Team Unite was the “Labour Forward” slate, a small group mostly promoting leftist rhetorical positions without a plan for achieving them. Their calls for the CLC to adopt a mass strike-oriented posture initially made some delegates view them as the alternative to the right wing, but their narrow approach – to the point of speaking against an anti-Islamophobia resolution because “it didn’t go far enough” – exposed the core of this slate as anti-leadership pot bangers with little else to offer. The fact that Labour Forward agreed with Team Unite on the key strategic point of delivering electoral support to the NDP demonstrated to delegates that this group was not the alternative that labour needs.

What is needed is not empty rhetoric but real-life preparations for a major struggle – mass coalition work to build up support for escalating independent labour political action like the Days of Action in Ontario during the Mike Harris government.

There were some important resolutions for the CLC and affiliates to take a leading position on social and economic issues. There were calls to unionize precarious workers, stand in solidarity with Indigenous peoples, fight for stronger climate policies and to defend marginalized people from hate and bigotry. But it all felt somewhat incoherent. Diverse resolutions were “compounded” into composite motions with contradictory directives, and which are unlikely to ever see the light of day on the incoming leadership’s to-do list. The Canadian Council approved a solidarity motion condemning the bombing of Gaza and respecting the human rights of Palestinians but, while announced, it did not come to the floor of convention.

Nowhere was the tension more evident than during the debate on opposing Conservative governments and re-affirming exclusive support for the NDP. These were the two top priorities identified among the 104 general resolutions compiled. While the motion to support the NDP passed, the debate and vote results – over 1000 delegates voted against it – indicated significant opposition to giving carte blanche support to that party. Clearly, a huge number of workers expect the NDP to earn labour support by fighting for working-class policies – the incoming CLC leadership will need to take note of this fact and act accordingly.

For many years, the Communist Party has advocated that the CLC should be courageous and plot its own independent political path. With an independent program for labour, the Congress could start setting the bar on economic and social struggles, rather than deferring to the narratives of political parties. It could bolster the voice of the many grassroots advocacy and activist projects that are far more capable of cutting through the political discourse to speak to working people at the community level on the issues that matter to them and in language that meets their local realities.

The CLC could deliver its considerable monetary and human resources downward to labour councils and to community advocacy projects. It could cancel costly marketing campaigns and redirect these resources to expanded training support for labour activists. Instead of gathering activists once yearly to lobby Parliament or door knock for a political party, it could be engaging activists in their communities to direct critical support. It could reduce the barriers to unionization by publicizing the advantages and conducting leading research and other technical support for union drives. It could host working groups to study and overcome inter-union conflicts in various sectors. At federation and affiliate conventions across Canada, local leadership has been calling loudly for unions to support real and measurable mobilization activities which build on the renewed interest in joining a union.

The unfortunate brevity of the CLC convention left only rare opportunity for alternative views to be heard, but delegates did manage to influence the direction. The right-wing social democratic leadership has long opposed any democratic “interference” from the trade union membership, but it has never been able to impose that on a convention. This time was not different, which is the reason the constitutional amendments were blocked. This underscores the importance of the fight at this particular convention.

Workers have two years to organize for the next convention, in conditions of mass unemployment, deep economic crisis and a growing fightback. While the new leadership will try to imprint their right-wing social democratic mark on the CLC, there can be no doubt that the struggle around the CLC’s strategic direction will continue. The 2021 convention showed that workers are looking for a CLC that will provide leadership through the current struggle, to defend working-class interests and fight for and win gains. This is a challenge that requires concrete work, not empty rhetoric or outsourcing to the NDP. It is a challenge that the Action Caucus – and the credible left – will need to continue to organize for.