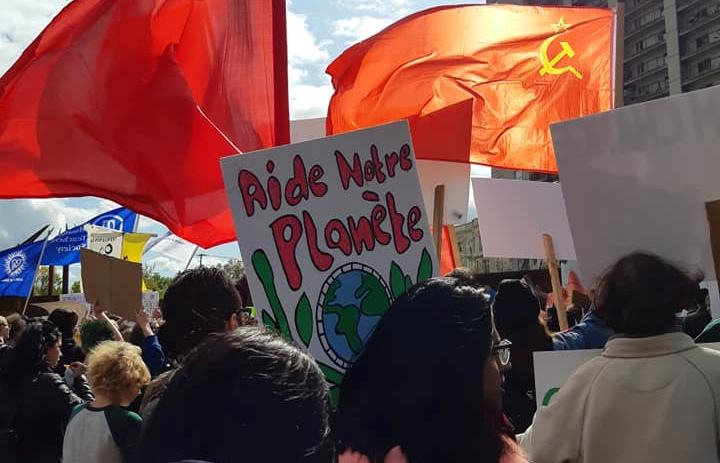 Marxists have long understood the link between capitalist expansion and environmental degradation. As Frederick Engels wrote in 1876, “What cared the Spanish planters in Cuba, who burned down forests on the slopes of the mountains and obtained from the ashes sufficient fertilizer for one generation of very highly profitable coffee trees – what cared they that the heavy tropical rainfall afterwards washed away the unprotected upper stratum of the soil, leaving behind only bare rock!”

For the first several years of the Communist Party of Canada’s existence, discussion and action around the environment were generally limited to natural resources and their relationship to economic development. Specifically, work was guided by the demand for nationalization of natural resources and resource industries, as necessary measures for ensuring that economic growth occurs in a way that benefits the working class.

An example of this was the Party’s response to the huge oil discovery at Leduc, Alberta in 1947, which marked the turning point at which Canada moved from being a net importer of oil to a major exporter. Ernest Manning’s Social Credit government ensured that the benefits of this oil boom would flow to US corporations, to whom it granted extensive concessions of public land and virtually unfettered access to farmers’ lands. The Alberta public received a paltry 12.5 percent royalty (equivalent to one out of eight barrels) and minimal employment benefits, as oil corporations looked to the United States for both oil-field workers and for manufactured equipment.

Through its newspaper and its work in mass movements like the Alberta Farmers’ Union, the Communist Party opposed the concession of public land and pressed for public ownership of the oil resource.

This policy of “environmental sovereignty” (a description that was never used by the Party) was expressed in a particularly robust form in the economic platform that was adopted by the National (Central) Convention in 1964. This document included calls for repatriation of natural resources and their ownership by the people, public ownership and operation of resource industries, and a “National Energy Policy” that would develop power resources and an east-west all-Canada electric power grid.

By the 1960s and 70s the effects of human activity on the natural world were becoming widely apparent – air and water pollution, hazardous waste and the use and effects of pesticides all attracted increasing scientific attention and became the focus of more social activism.

For the Communist Party, these scientific and political developments led to a recognition of the environment as an issue in its own right, not merely as an element of economic policy. A paper presented by Alberta leader William Tuomi to a 1973 conference of the Party’s four Western provincial organizations placed the demand for environmental protection among the five key elements of a country-wide policy on energy, alongside stewardship of natural resources.

Despite these kinds of calls for more action, it took some time for the issue of the environment to become fully present in Party activity. During the five federal election campaigns from 1972 to 1984, Communist Party platforms continued to reference natural resources almost exclusively in the context of policies that could facilitate industrial growth and economic development. While these policies were strong – nationalization of natural resources and public ownership and control over resource industries were and continue to be critical reforms – the lack of discussion about the environment as a stand-alone issue was conspicuous, particularly at a time when public opinion (especially among progressives) was increasingly aroused by issues of environmental degradation.

Over time, however, the Party’s work in and with environmental movements increased and this found reflection in its own campaigns. The 1988 federal election platform was the first to project a clear set of policies for the defense of the environment. It included calls for comprehensive environmental cleanup, action against acid rain, stiff penalties for polluters, expanded funding for conservation, bans on toxic chemicals and clearcutting and a moratorium on nuclear power development in Canada.

But these positions were largely reiterations of social movement demands, rather than a set of policies reflecting a Marxist analysis of the environmental crisis. There remained the need to develop working-class environmental policies and use those to engage the environmental movement to give stronger and more radical (anti-monopoly and anti-imperialist) shape to struggles which were increasing in their scope and intensity.

That task began in earnest around the mid-1990s, and it quickly focused on two scientific observations. The first was based on the experience of environmental degradation in the Soviet Union and other socialist states. While the Communist Party had long understood (correctly) that capitalism bore the brunt of responsibility for the growing global environmental crisis, it began to recognize the need to go further than that and critique industrial and economic activity more broadly. As then People’s Voice editor Kimball Cariou observed, “Industrial and other forms of economic activity cannot expand indefinitely without endangering the biosphere in which we live, and exhausting our finite supply of resources … We need to develop a concept of socialism which is not based on an ever-increasing accumulation of material goods.”

The second important early observation was that capitalist expansion had fundamentally changed the relationship between labour and nature, and that limits needed to be placed on human economic and social activity. Such limits, of course, would need to be achieved through class struggle, and the Party program that was updated in 2001 specifically identified that resolving the tension between workers’ economic demands and the need to protect the environment was a key area of work to advance the revolutionary struggle:

“The greater scale of capitalist exploitation and crises means that environmental concerns are now inescapably linked to working-class living conditions, including in Canada. Parts of organized labour, particularly some resource-based unions, have bought into the corporate agenda that pits environmental protection against employment. It is of vital importance for labour and environmental organizations to recognize that the protection of the environment is in the long-term interests of sustainable employment, and for communities to unite against their common enemy, monopoly capitalism.”

This updated programmatic direction was further refined in the 2009 “People’s Energy Plan,” which was an effort to update longstanding energy policies in the context of greatly changed economic and environmental conditions. It maintained the call for an east-west power grid as the desired vehicle for energy sovereignty but placed a much greater weight on public ownership and democratic control of resources and all aspects of production/extraction, refinement, distribution and sale.

The 2009 plan included an analysis of the relationship between resource extraction and both colonialism (arguing that development on Indigenous land can only proceed with Indigenous people’s full knowledge and consent”) and Canada’s imperialist foreign policy of militarism and war. It also took aim at capitalist “solutions” like carbon taxes and cap and trade schemes, which simply commodify the right to pollute. Against these, the Party positioned its long-held call for strict legal limits on pollution and stiff penalties for corporate offenders.

Perhaps the most notable element of the People’s Energy Plan was its call for a deliberate economic transition away from fossil fuel use. This includes a moratorium on development of tar sands and shale gas operations and the progressive closure of existing ones, opposition to oil and pipelines, an end to coal-fired and a massive program to ensure a just economic and social transition for affected workers and communities.

The critical work of developing a concentrated working-class environmentalism presents the Party with a sizeable dilemma – how does it give priority to struggles for workers’ jobs, wages and benefits while promoting strict limits on economic activities that provide many of those same necessities? The Communist Party understands that its task is precisely to engage such contradictory circumstances, creatively applying the science of Marxism to concrete conditions in order to weld socialist consciousness onto the class struggle.

The stakes are high – the overall context is one of an approaching existential crisis whose rate of acceleration means that the timeline for change is shortening. But to simply repeat either the spontaneous demands of the environmental movement or the immediate economic demands of workers would allow socialist thought to stagnate. This would abandon huge sections of the working class to the domination of bourgeois ideology and condemn the entire human species to the destructive conclusion of unending capitalism.