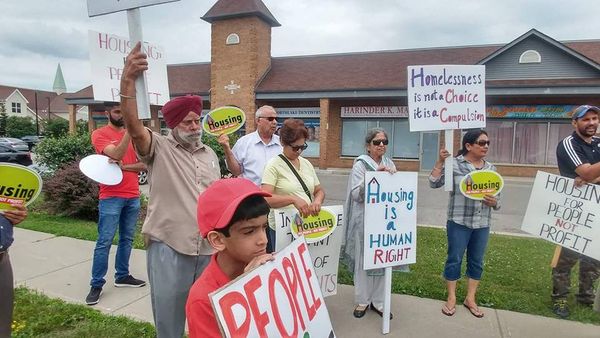 Among the series of crises that the coronavirus pandemic has caused and exposed in Ontario, one of the most dramatic is in housing. Homeless people have been exposed to the virus in overcrowded shelters and, as a result, encampments have grown exponentially. Across the province, municipalities have already bulldozed these encampments or are threatening to do so.

Ontario’s unemployment rate has doubled since the pandemic began. After CERB finished and the emergency freeze on evictions was lifted in August, thousands of tenants were left unable to pay rent and have been evicted or are in the process of being evicted. The tenants involved are disproportionately low-income and racialized people.

The Ford government further weakened tenants’ rights when it passed Bill 184, the perversely named Protecting Tenants and Strengthening Community Housing Act, which heavily favours landlords in the eviction process. At Landlord and Tenant Board (LTB) hearings, only 3 percent of tenants have representation, while 80 percent of landlords do. At the end of 2020, the LTB began an online blitz of hearings, with the goal of evicting at least 100 families each day.

Many tenants are being evicted in absentia. This may be because they are ill or don’t understand the process or don’t have the electronic means to attend an online hearing. Or perhaps they have been caught up in the LTB’s Kafkaesque process which kicks people out of hearing rooms at random.

The federal government has acknowledged that housing is a human right, but governments at all levels continue to fail in their responsibility to provide adequate permanent social housing.  Instead, they have pursued market-based solutions to increase the housing stock – typically, these policies only incentivize developers to set aside “affordable” housing at 80 percent of average market rent, a moving target that is not pinned to income and which remains unaffordable for most working families.

The Ontario Committee of the Communist Party is launching a new housing campaign “to support those who struggle against a brutal capitalist system that throws people and families into the street during a pandemic.”

The campaign is organized around several key demands, aimed at various levels of government. These include repealing Bill 184, extending the ban on evictions and foreclosures and placing all units, including vacant ones, under rent control to eliminate the two-tier system. The party is also calling for a ban on “renovictions,” a system of rent-rollbacks so that tenants pay only 20 percent of their household income on rent, and a reversal to the government’s policy on vacancy decontrol which incentivizes landlords to kick out tenants and hike up rent prices.

Ontario Communist Party leader Drew Garvie told People’s Voice that “our campaign will press for an immediate, comprehensive plan to fund and build permanent rent-geared-to-income social housing, where rent is based on 20 percent of household income, to meet the needs of underhoused and homeless populations of Ontario.”