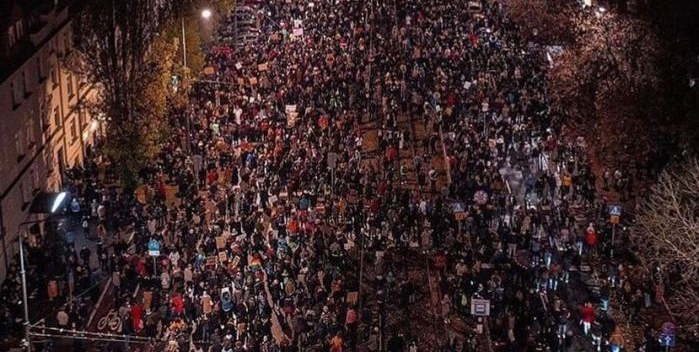 The Constitutional Court’s ruling, that abortion of terminally ill fetuses is unconstitutional, has sparked a nationwide outrage and a wave of protests that has terrified the authorities.

Thousands of people have been taking to the streets of Polish cities since October 22, despite bans and the pandemic. The protest is gaining momentum and the situation developing into a turning point. Demonstrations are not only taking place in large cities, where resistance to the imposition of clerical morality has always been strong, but also in smaller centers. Several hundred gatherings, blockades and marches have taken place, including in cities and towns considered to be bastions of the PiS [the ruling, right-wing populist Law and Justice party]. They have mostly involved young people, who have no experience in similar activities or no specific political views. This is an accelerated course in civil disobedience for them. The slogan “this is war,” adopted as one of the main ones during the social mobilization, shows there is no lack of radicalism. The protests have surpassed the expectations of many left groups.

This marks the first time that existing rules of etiquette for demonstrations – prescribing dignity, calm and legality – have been swept aside. The assemblies are illegal, because the authorities used the pandemic period to introduce controversial changes. In the face of police intervention, the protesters’ weapons are their huge numbers and their solidarity. Radical and often obscene slogans are popping up, in response to the situation. At this point, we can see a division between those who are genuinely outraged, and those liberal politicians trying to build their image by capitalizing on the protests.

The taboos on respect for the institutions of the Catholic Church have also collapsed. The pedophile scandals, the arrogance of the hierarchs and their enthusiastic statements after the court verdict have all added fuel to the fire. Masses have been interrupted in many churches.

Among other things, demonstrators entered the Poznań Cathedral the day after the bishop praised the intention to completely ban abortion. Anti-government and anti-clerical slogans appeared on the walls of numerous churches. Liberal capitalist politicians saw this as an act of vandalism; but in reality, it expresses a radical, uncompromising opposition to clericalism. Priests who openly support the authorities have been struck. In Szczecin, a crowd of young people directly shouted slogans at local parish priests. This is a very positive development – young people are turning their backs on clerical superstition.

It is the first time that so many protests have been so radical. Both in larger and smaller towns, roadblocks and actions at PiS offices took place. Politicians of the ruling party directly felt the social anger. A member of the Constitutional Court, Krystyna Pawłowicz, declared that she is afraid of the protesters. This is what a radical protest should look like. Specific people are responsible for these anti-social and anti-human decisions. They should be taught that these actions have consequences. It is not enough to write petitions, hold academic debates and participate in public consultations. At some stage, it is necessary to show anger in the street.

Right-wing militias set up by the right to ‘defend the churches’ may have been effective against elderly pensioners [during pension protests in early October], but they are completely helpless against these thousands of demonstrators. They had to run behind riot police to protect themselves from being up. Leaders of fascist groups dramatically sent out messages claiming they had been attacked.

The radical left is also taking part in the protests and red banners are visible. It is important to stand by everyone who takes to the streets today. Liberals will not protect people’s rights – for them, only the election strategy matters. They do not care about the fate of the families of sick people or of children with disabilities.

This is why we need to extend the demands to include social issues. We need to say that a ban on abortion hits working-class women first and foremost. Allowing abortion in the event of irreversible fetal disease is not enough. Women who choose to give birth to a sick child should receive help. Instead of allocating extra funds to modernize the army, the government should redirect it to support families of people with disabilities, as well as healthcare.

Right now, the level of confrontation is increasing. The government threatens to send troops to the streets but is aware that such a move could mark the beginning of its end. On one hand, there is an outraged society of mainly young women; and on the other are reactionary authorities hiding behind the uniformed backs. In such a confrontation, the Communists’ position is unambiguous – unconditional support for the fight against both right-wing reaction and the liberal, false friends of “women’s rights.”

Republished from the website of the Communist Party of Poland. Translated from Polish by PV staff.