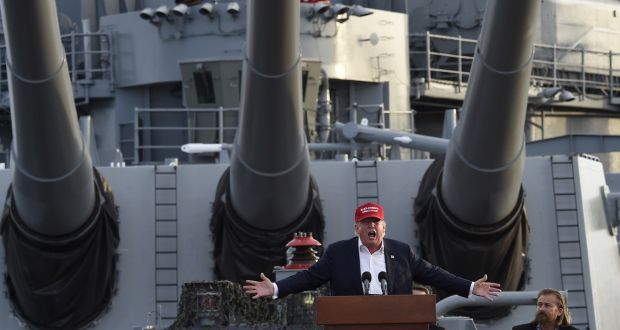 Nearly two decades after 9/11, military-industrial complex is stronger than ever

The current occupant of the White House tries to play the role of an isolationist, anti-war president, constantly pledging to “bring our troops home” from this or that military adventure. He rails against his predecessors for pursuing policies of endless war. He even made the stunningly correct criticism this week that Pentagon leaders “want to do nothing but fight wars so that all of those wonderful companies that make the bombs and make the planes and make everything else stay happy.”

His fawning sycophants have tried to paint Trump as picking up the mantle of President Dwight D. Eisenhower, who nearly 60 years ago issued the grim warning that the “conjunction of an immense military establishment and a large arms industry represented the rise of misplaced power,” endangering liberty and US democratic processes.

Trump’s unconvincing act as an anti-militarist is clearly just a re-election show, a charade meant to hold onto blocs of voters he sees slipping from his camp. Its intended to distract from his shameful comments calling US veterans and enlisted troops “suckers” and “losers.” His fresh “attacks” on the military brass are offered as supposed proof that the president is loyal to and looking after the rank-and-file soldiers he actually holds in clear disdain.

Placing any faith in the idea that Trump is the one to fight back against the marriage of weapons dealers and government defense officials is about like trusting him to protect us all from health insurance companies when it comes to pre-existing conditions. There’s a reason thieves aren’t hired to guard bank vaults.

Under Trump, the merger mania between the Pentagon and the top arms manufacturers is on a scale that may overshadow even that of the Bush administration in the years before and after 9/11. All of Trump’s defense secretaries – he’s had three so far – have been hand-picked straight from the defense industry. General Jim Mattis was on the board of directors of General Dynamics, which specializes in aerospace weapons and nuclear submarines. Pat Shanahan served as an executive with Boeing, maker of warplanes. And current defense chief Mark Esper was top lobbyist for Raytheon, the company that makes the cruise missiles Trump fired into Syria.

According to the Project on Government Oversight, almost 50 percent of senior officials in the US Department of Defense are connected, in one way or another, to defense contractors. The people making decisions on the purchase of weapons and foreign policy today are the same ones who were selling the government armaments yesterday.

This president fought for defense budgets during his time in office that have blown past all previous records. Twice so far, he has signed war budgets totaling over $700 billion each. He’s preparing to sign a third soon. He regularly appears on television with tanks and bombers as his backdrops, brags about the US’ ability to destroy other nations, and longs to have big military parades that make him look like the dictators he so admires.

Regardless of what Trump might say to score votes, no one should expect that any of this is going to change if he’s re-elected. For proof of that, just look at how the defense industry is reacting to the presidents bluster this week. One industry official anonymously told Politico, “He has a really long history of really pushing the defense industry forward and bragging about large defense budgets and talking about F-35s and rockets and things like that, so I just don’t think anyone thinks there’s a lot of reality behind what he’s saying.”

Wall Street, where arms stocks bring big profits, isn’t breaking a sweat either. Byron Callan, a defense market analyst, said he hasn’t “gotten a call from anyone who is like, Oh my god, Byron, should I sell all my defense stocks?” Callan says Trumps statement “makes no sense,” and that he imagines the president could “flip 180 degrees in a week.”

In the 1980s, the US government funneled weapons and money to Islamist fundamentalists in Afghanistan in a proxy war against the Soviet Union. The CIA succeeded in destroying that country’s experiment in democracy and socialism, but it also ended up creating the very force that would come back to hit America on September 11, 2001. During both the earlier Cold War and in the “War on Terror” that destroyed Afghanistan and Iraq after 9/11, the military-industrial complex raked in the cash.

Millions died along the way, casualties of the drive for war profits. But no lessons were learned.

The bonanza continues under Trump. This president has essentially handed the Pentagon over to the top executives of companies that specialize in producing weapons designed for no other purpose than human destruction. Money that could be going to so many public priorities – especially the Medicare for All health system that COVID has shown us we so desperately need – is instead funneled into private pockets.

The greatest national security threat the people of the United States face today resides inside the White House. Fortunately, there is a weapon which all of us can use to defend ourselves against this danger – our ballots.