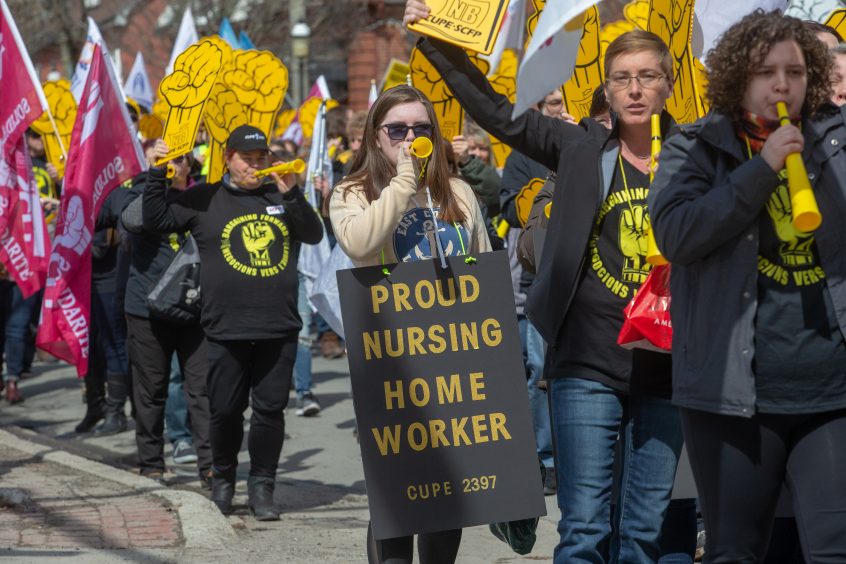 Though disappointing, the results of New Brunswick’s provincial election are unsurprising. The Tories won a majority with 27 seats, the Liberals won 17 seats, the Greens three and the People’s Alliance two. The NDP, shattered and struggling to build support in New Brunswick, won no seats. The Tories won 5 more seats than in the last election, while the Liberals lost 4 and the People’s Alliance lost one.

This makes Blaine Higgs the first premier since 2003 to win a second term in New Brunswick. Granted a majority government, Higgs’ snap election gave the Tories exactly what they were hoping for – a free hand to carry out a massive agenda of austerity.

The Tory government had already refused to rescind regulation blocking out-of-hospital abortions from being covered by Medicare. Higgs failed to fund Clinic 554, violating the Canada Health Act, and tried to close six emergency departments in rural hospitals. The government also illegally barred long-term care home workers from striking, after refusing their demands for higher wages and safer working conditions. In one instance, Higgs told workers to “focus on more important issues.” Healthcare has taken the brunt of the damage from Higgs’ government.

The future is not any brighter. In the Conservatives’ 2020 platform, they laid out their vision of economic recovery by “prioritizing NB businesses.” This includes investments and collaboration with private industries and big corporations including telecommunications giants, private-sector partners in nuclear energy and the tech industry.

Communists know that elections are only one front of a multi-faceted struggle that includes the labour movement and the various peoples’ struggles. Saving Clinic 554 from the Conservative attack, preventing cutbacks and austerity and building workers’ power in New Brunswick can happen even in the face of a Tory government, but only if we make it.

Over the next four years the Communist Party will work to expand our reach in Fredericton and support the establishment of new Party clubs in communities across New Brunswick. A strong communist contingent in the province can support the fightback and, as we build the Party in New Brunswick, present a real alternative for working people at the ballot box.

Concerns like adequate housing, accessible healthcare, low wages, police reform, Indigenous rights, and climate change can no longer remain unaddressed. Real solutions must be presented, not pathetic half-measures. While other parties generously give millions in taxpayer money to big corporations, the Communist Party is the only viable alternative for working people and their needs. We present the real solutions needed for a People’s Recovery from this pandemic and recession. The working class must be put ahead of big corporations.

It’s time to get organized. Another world is possible.