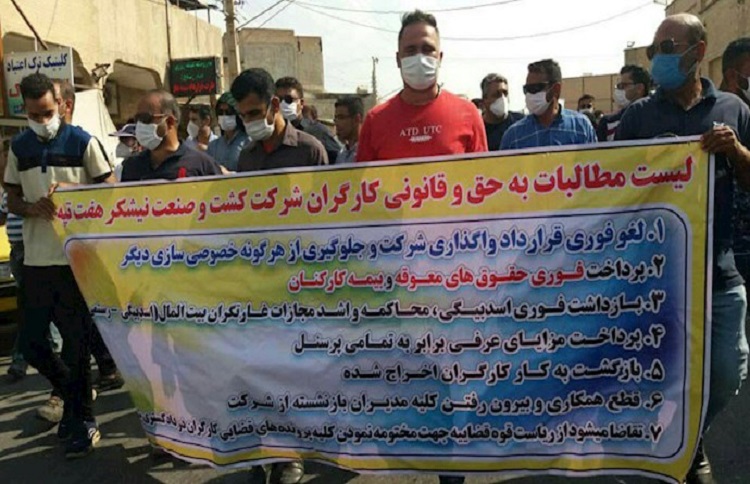 September 2 marked the 80th day since workers of the Haft-Tappeh Sugarcane complex in the south of Iran came out on strike, on June 15. They are demanding their unpaid wages, medical insurance, reinstatement of dismissed colleagues, return of the industrial giant to the state sector and the return to the workers of funds embezzled by the privatized company. They are also demanding that the CEO of Haft-Tappeh, Omid Asadbeigi, currently facing a string of corruption charges, be held in custody while his trial takes place.

Jane Green, speaking on behalf of the Committee for the Defence of the Iranian People’s Rights (CODIR), said, “Our congratulations and solidarity greetings go to all workers taking action and their families. The resolve of the strikers has remained firm. They are not going to give up.”

The strikers have already made significant gains. After 26 days, they forced the employer to pay one month’s unpaid wages, for March-April 2020. But only some received their money. On day 53 the remainder got their March-April pay, and on day 57 the employer paid two further months. Non-contract workers owed money, however, got nothing. These are mostly seasonal workers, whose rights are not covered by Iranian law, and whose situation is particularly desperate, as explained by Mehdi Kouhestaninejad, an Iranian labour rights activist based in Canada:

“In all countries there are laws and regulations for seasonal workers, but unfortunately not in Iran. The workers who are needed only a few months a year, work under very harsh conditions and produce surplus value, but at the end they are jobless and have to wait until the next time to find out who will be called back to work again.”

“The workers are determined to continue their action until every last penny of unpaid wages has been paid to those who earned it – to employees and non-contract workers alike. They will also stand firm on their demand for medical insurance cards, which the new private owners, in what amounts to a serious attack on workers’ rights, are failing to fund.”

Medical insurance cards were renewed on July 1, but it soon came to light that they would expire only 20 days later. An announcement then followed that insurance coverage would be extended to the end of the Iranian year (March 20, 2021). But so far, there is no sign of this happening and, until it does, extension of insurance coverage will remain a key demand of the strikers.

“The new private owner, Asadbeigi, and his partners in Haft-Tappeh, owe a lot of money to the Social Security Organization [the national body that administers workers’ insurance] and it is not clear whether the government is going to do something about Asadbeigi or not.”

In a further development, on the strikers’ demand for reinstatement of fired workers, it was announced that three of those who were dismissed, under the pretext of security allegations, will be returned to work. But this will only occur after they sign letters promising not to commit further acts of protest. One dismissed worker, Esmail Bakhshi, remains banned from returning to work. The announcement followed a meeting between the Article 90 Parliamentary Committee and the security and judiciary authorities.

Kouhestaninejad emphasizes the fact that the striking workers, with strong international backing, have managed to force the government to get involved. This is a great achievement.

“Fortunately, with strong international support and solidarity and the unique grievance filed with the ILO under Article 24 [see below], the workers were able to make the government look into this issue. This was an important achievement in that the workers of Haft-Tappeh and their legitimate strike were recognized across the world.”

The new round of the protest at Haft-Tappeh has coincided with the trial of Omid Asadbeigi, the CEO of the company, and others, charged with “participation in forming an organized network of sabotage in the monetary and foreign currency market of the country by smuggling foreign currency.” This conforms with what workers have been alleging about the financial corruption of managers of the privatized company.

Kouhestaninejad compares this hearing with the trial of Haft-Tappeh workers. The contrast is stark:

“The workers who are asking for their wages are brought to the court shackled. But Asadbeigi wears a suit and tie… He even threatens that his uncle [Eshagh Jahangiri, First Vice-President of Iran] will take care of this!”

As for dispossession of Asadbeigi as the private owner of the company, the chair of the Privatization Organization of Iran stated that dispossession (and returning the company to state-ownership) has to be reviewed in a meeting of the heads of the executive, legislature and judiciary of the Islamic Republic of Iran.

After meeting the members of parliament, Mr Jahangiri claimed that “reviewing the competency of Mr Asadbeigi would take three months.” This is another delaying tactic, while the outcome of the dispossession hearing remains unclear.

As for returning the embezzled funds to the company, Kouhestaninejad says, “Returning the funds has not happened yet… and even if anything is returned, its value is not the same as before [due to massive inflation in Iran]. The workers’ strike is in fact a fight against embezzlement in Iran. The workers are taken hostage by a CEO who neither deserved to be a manager nor had any knowledge or expertise, [even] within the normal standards of management in Iran.”

CODIR supports the demands of the Haft-Tappeh workers in their struggle against their new and corrupt private employer, as well as for their trade union rights based on ILO conventions 87 and 98. CODIR has sent a number of solidarity messages to the strikers since mid-June and calls on trade union and other labour movement organizations across the world to do the same. The winning of the demands of Haft-Tappeh workers has significance for workers everywhere. On the 80th day of their strike, and on all other days, they must have our solidarity and support.

[Article 24 of ILO, Representations of non-observance of Conventions, says: “In the event of any representation being made to the International Labour Office by an industrial association of employers or of workers that any of the Members has failed to secure in any respect the effective observance within its jurisdiction of any Convention to which it is a party, the Governing Body may communicate this representation to the government against which it is made, and may invite that government to make such statement on the subject as it may think fit.”]