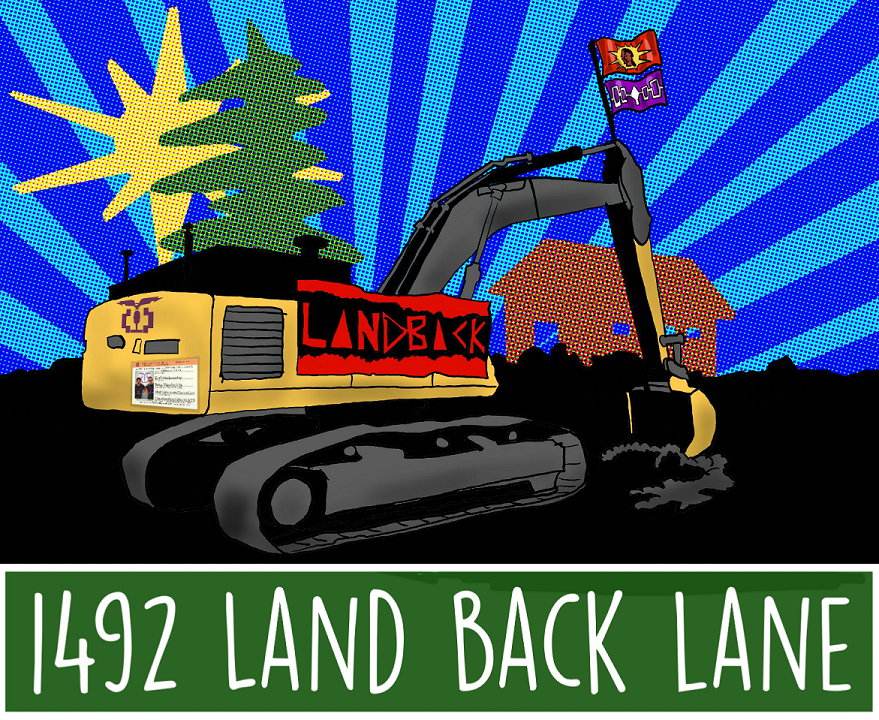 On July 19 in the evening, land defenders moved onto unceded Haudenosaunee lands that were close to being heavily developed. Free, prior and informed consent to develop these lands was not attained. A construction project to be named Mackenzie Meadows would effectively destroy the ability to resolve the disputed status of the land and this heavy land alteration was and is set to begin.

Land defenders stopped this development and have renamed the land 1492 Land Back Lane and intend to keep it as Haudenosaunee territory, in the words of one of the many land defenders Skyler Williams, “forever.”

Court Orders as a Tool of Colonialism

The developer, Foxgate, and the County of Haldimand easily attained an injunction in short order. Obtaining an injunction does not reflect the merits of the broader case, it is a temporary tool. First Peoples Law, a firm dedicated to advancing the rights of Indigenous people in Canada, and the First Nations governance think tank Yellowhead Institute have documented arguments critical of this tool.

First Peoples Law has called injunctions a “tool of colonialism.” The purpose of an injunction is to preserve the status quo until a resolution can be reached. A measure called the ‘balance of convenience’ factor favours the interests of third parties, particularly the economic welfare of developers, and this is part of why the numbers skew against land defenders.

Participating in Western power constructs that have deep rooted white supremacist foundations has yielded limited results for Indigenous people. Haudenosaunee people have their own decision making bodies derived from their own laws. The courts do not acknowledge this and see the singular Canadian rule of law as sacrosanct.

“According to Canadian law, our law also needs to be respected,” argued Skyler Williams, during a press conference after a judge on the banks of the river of the disputed territory extended the previous injunction. “When they continue to enforce these injunctions in the violent way that they do it, it goes against Canadian law.”

On August 5, several dozen armed OPP officers fired rubber bullets and arrested 9 land defenders, some of whom were resisting by throwing rocks. Separate community members supportive of the 1492 Land Back Lane Land defenders closed off multiple roadways and turned back a rail car on Haudenosaunee territory on the same day. Tires were lit on fire as an act of resistance and a sign of distress. A construction excavator was lit on fire and when emergency service providers came to put it out they were granted access through the main barricade, but frustrated Six Nations people turned them back by throwing rocks and restricting access to their territories and the fire.

When OPP officers attempted to access 1492 Land Back Lane from the western access points, they were turned away by Haudenosaunee people. The Highway Six bypass at Argyle Road and the corner of Fifth Line and Highway Six were barricaded. The area in front of the Kanonhstaton reclamation sight was barricaded.

Because of the strong community response, the land defenders reclaimed 1492 Land Back Lane that evening. A fire was lit by supportive community members at the corner of Sixth Line and Argyle St called “Six and Six.” The fire remains lit to watch the western edge of 1492 Land Back Lane. It is guarded by veterans of the Kanonstaton territory upon which it sets.

New injunctions were awarded to Foxgate and Haldimand in the following weeks that now included the newly blocked roads. Around 20 OPP vehicles are stationed at a Caledonia community centre a few blocks from 1492 Land Back Lane. OPP aircraft frequently circle the camp.

The police remain ready to enforce the injunction but have not yet done so. They are using a Provincial Liaison Team to seek a resolution that doesn’t involve forceful removal. Broader public safety is another element the police may be considering. The last police action motivated several dozen Haudenosaunee people to erect more road blockades and greater public disruption in reaction to the raid at 1492 Land Back Lane.

Still, the police have made it clear they could enforce this injunction at any moment. As a matter of law, they must enforce the injunction if they cannot negotiate a peaceful de-escalation. Their discretion, and their tactical reasons for not informing the public of their intentions, leave the question of when they might try to arrest people at the camp as a great point of uncertainty.

On August 25, Justice Harper extended previous injunctions against land defenders at 1492 Land Back Lane and against blocking roads in Haldimand county – even though by the time of his ruling the roads had been cleared as an act of good faith. He disregarded the action as a land claim and outlined steps within the framework of Canada to submit land claims that had not been followed. He also – based only on social media posts – named Skyler Williams as the leader of this land action pinning civil and potential criminal liability on one person.

“There is no award of damages that could adequately compensate either Haldimand or Foxgate in the cases before me,” Justice Harper said, [adding that] central to Canadian values is the rule of law. “It applies to everyone, without exception.”

When Justice Harper started to speak of reconciliation and condemn land defenders, a Haudenosaunee woman attempted to address the court. The judge was unwilling to use his discretion to modify his courts rules to allow her to address the matters at hand. He called this attempt to engage the courts unfair because the OPP lawyer and other lawyers had sent their submissions in writing in advance.

Justice Harper had discretion to allow a Haudenosaunee woman to address the court. He chose not to allow it. He continued to condemn Haudenosaunee people for not participating within the Canadian framework, in his singular view of the rule of law.

Now that Skyler Williams is a named defendant, the onus is on him to defend a broad range of actions by numerous people as the named leader of this movement. The Canadian legal system favours people with money, creating another barrier for a fair outcome. The risk of more extensive criminal charges above and beyond the civil court charges even further compound the barriers for this land defense.

How will this be Reconciled?

The land defenders have indicated that they will not stand down. They want the land back.

The elected Indian Act council of the Six Nations reserve is publicly bound to support the project because they signed an accommodation agreement accepting $352,000 and 42 acres in exchange for their support. The traditional Haudenosaunee Chiefs stand behind this reclamation. Both councils have asked for a development moratorium on disputed lands.

The local Haldimand government stands behind its support of the development and expects the Haudenosaunee and their supporters to be removed. Ontario’s premier has condemned the land defenders for the way they resisted the police and retaliated, but he has spoken to the elected Indian Act chief of the reserve, Mark Hill. The federal government has sent a letter to the elected council and to the traditional Haudenosaunee Chiefs council expressing an interest in having a meeting, but no time frame was set.

“Canada deeply values its relationship with Six Nations and is committed to continuing to work collaboratively to address Six Nations’ historical claims and land right issues,” said a response from the Office of the Minister of Indigenous and Crown Relations, shared with One Dish, One Mic. “With regard to the McKenzie Meadows Caledonia housing development, we encourage the parties involved to continue to work together through open dialogue to find a constructive, respectful, and positive way forward.”

At the same time this statement was released, dozens of officers remain stationed within three minutes of the encampment. What could a successful liaison to avert a confrontation look like? Will they move in a second time and test the support for the reclamation? What is certain is that they won’t stay at this ad hoc detachment location forever.

Maybe an indication of things to come is that when One Dish, One Mic sent the inquiry email to the Minister’s office it was entitled ‘1492 Land Back Lane’ but before the response was sent the email title was changed by the federal respondent to ‘McKenzie Meadows.’

[This article was originally published at One Dish, One Mic Indigenous media on September 1. The following day, Karl Dockstader – Oneida of the Thames Bear Clan – was arrested and charged while reporting during the land action at 1492 Land Back Lane.]