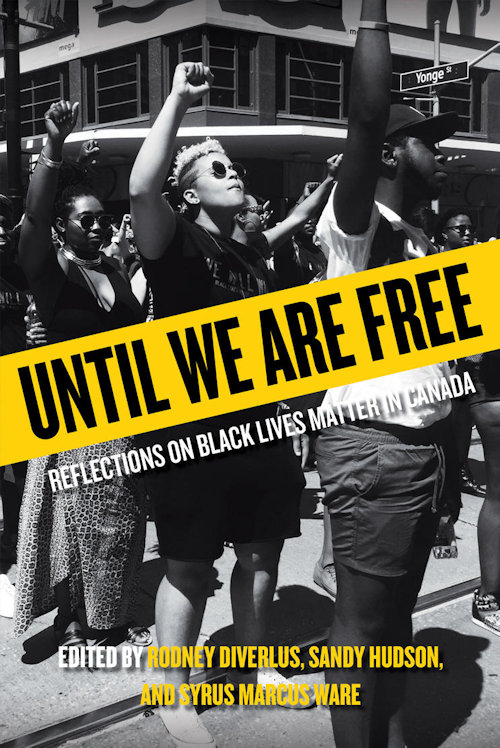 Until We are Free: Reflections on Black Lives Matter in Canada

White supremacy and colonialism aim to erase the political, social and cultural history of Indigenous and Black lives on Turtle Island. The publication of Until We are Free: Reflections on Black Lives Matter in Canada exposes and reclaims rich layers of information that document the liberation struggles of these two groups north of the 49th parallel. This collection of essays also records the beginnings of Black Lives Matter—Toronto (BLMTO), the first branch outside the United States and the beginning of the global BLM movement which has exploded since the murder of George Floyd in May by Minneapolis police.

Editors Rodney Diverlus, Sandy Hudson and Syrus Marcus Ware, core and founding members of BLMTO, share their wealth of knowledge on how the Black community – including Black trans, queer and Muslim people and Black people with disabilities – come together to organize effectively against police violence and systemic racism. They have also curated essays from Indigenous and Black activists and artists that outline how to build effective coalitions to disrupt the Canadian colonial project, how to abolish the prison industrial complex and the school-to-prison pipeline, and how to nurture and support activists within the movement.

The book depicts heartbreaking episodes of anti-Black racism in Canada. When Black trans and queer activists from the band Pelau marched in the 2003 Pride parade, they were told they were in the wrong parade and should be waiting until August to march in Caribana. Omisoore Dryden documents the history of anti-Black/anti-African blood donation practices in Canada, which weren’t ended until 2018. Syrus Marcus Ware writes about the difficulties of archiving the participation of Queer, Trans, Indigenous, Black, People of Colour (QTIBPOC) in the movement in Toronto in the 70’s and 80’s. In a face-to-face meeting with “a self-proclaimed elder, a white gay activist whose account of the Toronto bathhouse raids in widely cited,” Ware is told that “trans women of colour . . .weren’t there. I was there. I would have remembered.” Ware finishes the chapter by stating “we were there, we are, as Miss Major says, ‘still fucking here.’”

The hurt permeates the essays in this anthology. But the trauma and damage of anti-Black racism is placed alongside a hopeful and forward-looking documentation of the resistance of the BLM movement.

The collection has a large section devoted to the artistic vision of BLMTO.  An excellent essay by Diverlus, a dance artist, discusses the choreography and language of their protest demonstrations. “[BLMTO protests follow] a pulse, a rhythm. In our work, music, poetry, rapping and spoken word are supported by unison gestures: a waving of limbs, stomping to a beat, marching in sync. These actions are artistic and choreographic, but they are also more than that. I identify these as acts of politichoreography. Stomping, marching, raising fists: these movement vocabularies are carefully selected, curated even, to agitate and harness the protestor’s rage. These choreographed movement elements, like a raised fist, are crucial in determining the tone of the protest itself.”

The language of the protests is culled from conditions under which Black men have been murdered by the police: “Hands up – don’t shoot,” from Mike Brown in Ferguson who was shot in the back with his hands in the air, and “I can’t breathe,” from Eric Garner (and seventy other Black victims who died in police custody.) Another chant, “Black Lives,” is responded to by the crowd, “They Matter Here.”

Several essays focus on BLMTO’s sit-down protest at the 2016 Pride parade in Toronto.  Activists demanded double the funding for Black activities during Pride and the removal of police floats and booths in all Pride marches, parades and community spaces. After BLM activists stopped the parade for twenty-five minutes, the Executive Director of Pride Toronto capitulated and signed BLMTO’s list of nine demands. He then declared the agreement was coerced and stated that he had no plan to follow through. BLMTO did, however, and forced a complete shift in Pride Toronto’s composition and their eventual agreement to the original demands.

Until We are Free smashes the myth that Canada is a multicultural haven – that there might be ‘freedom’ at the end of the underground railroad. At the founding of the global BLM movement, the Canadian delegation had to education their American counterparts that Canada once had a slave industry and had developed its own version of systemic racism. Included in the centre of the book are documents that bring the reality of Canada’s racism to the forefront: reward ads for returning runaway slaves; a picture from a 1925 Toronto Star front page of a Ku Klux Klan rally that year; correspondence to the City of Edmonton from the KKK requesting and being granted a permit for a rally and cross-burning at a meeting in 1932. Until We are Free establishes the Canadian context of systemic racism as part of the colonial project that continues to exploit and oppress both Indigenous and Black people.

What are the messages for social movements from Until We are Free? Sara Jama, the co-founder of the Disability Justice Network of Ontario, talks eloquently of needing to root disability justice into all movements. Sandy Hudson’s recounting of the tent city that was established outside Police Headquarters in Toronto outlines the need to work in coalition with Indigenous groups – to respect their organizational practices and cultural traditions. And of course, movements need to understand the context of anti-Black racism as it relates to the Canadian experience.

A futuristic fictionalized preface and epilogue open and close this collection. The preface describes the environmental devastation of climate change at its peak. In the epilogue, set in 2092, people are starting to recover and rebuild. Black people have been liberated by practising Sankofa – the need to reflect on the past to build a successful future. An anti-capitalist world results, the road map to it created by small whispers of ‘We Will Win’ that grow to become “a worldwide cacophony.” In the aftermath of George Floyd’s murder, those global voices are beginning to be heard.