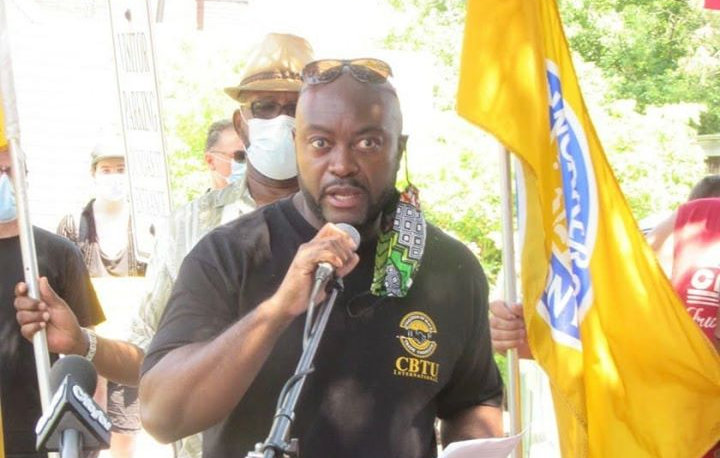 On June 25, Mark Austin and Candace Zinkweg were walking their dog in Dentonia Park in Toronto’s east end. When their dog was bitten by an off-leash dog, they confronted the dogs’ owners who quickly became very aggressive and threatening. Zinkweg was assaulted and suffered a concussion. The assailants hurled racist abuse at Austin, who is Black, and threatened him with gun violence, both during and after the incident.

The police response to this assault and death threat was a clear indication of systemic racism. Clearly, racial profiling was in play, as the police immediately assumed Austin was equally guilty and said the only way to proceed was to charge everyone because it was a “he said/she said” situation. They did not seek out any witnesses in the well-used park, nor did they interview Zinkweg for several days.

After working on his own to escalate things with the police to push for a full investigation, Austin reached out to his union, the United Steelworkers (USW). The USW Toronto Area Council, supported by the Black Action Defence Committee, Coalition of Black Trade Unionists and Toronto East Anti-Hate Mobilization, quickly organized a demonstration outside of Toronto Police 55 Division. It was attended by about 200 people from the community and the labour movement.

Speakers from several organizations called out the racist response of police and the differential treatment of Black and racialized victims of crimes, linking it to other recent incidents in the Toronto area. In the past few months, Toronto has seen huge protests of the deaths of Regis Korchinski-Paquet and Ejaz Ahmed Choudry while in the presence of police. In both cases, police were called by families seeking a wellness check and assistance for a family member in distress. Korchinski-Paquet, a Black and Indigenous woman, fell 24 stories to her death after police entered her apartment room and prevented other family members from entering. Lawyers for her family have said their investigation suggests there are grounds for criminal charges against the police. Choudry, who moved to Brampton from Pakistan, was shot dead by police while experiencing mental health distress. Video footage shows police opening fire on Choudry immediately upon kicking in his door. His family had called for assistance from mental health professionals, rather than police.

The community is also outraged about the verdict in the case of Dafonte Miller, a young Black man who was beaten so badly by two white men – one an off-duty police officer – that he lost an eye. His attackers were found not guilty on all counts except one charge of assault. They were acquitted of aggravated assault and obstruction of justice.

Three weeks before the attack on Austin and Zinkweg, Toronto police chief Mark Saunders (who recently and abruptly retired) took a knee at a Black Lives Matters demonstration in Toronto. Mark Brown, from The Canadian Union of Postal Workers (CUPW) and the Coalition of Black Trade Unionists (CBTU), called out Saunders’ hypocrisy at the 55 Division demonstration. “If those same Black lives cannot get justice in their time of need, then the knee that the police chief placed on the ground remains on the necks of every one of those Black lives today.”

In Austin and Zinkweg’s case, the labour-community mobilization has led to the arrest of two of the three assailants. It also helped force police to escalate the investigation to the Toronto Hate Crimes unit.

Dentonia Park is in Crescent Town, a diverse and densely populated neighborhood with large Bengali, Jamaican, Pakistani and Tamil communities. The neighbourhood is highly educated with a wealth of international experience, but many people are un- or underemployed. Over a third of the population are low income and over 40 percent have trouble affording adequate housing. Racist incidents against Black and South Asian people are not unusual. Toronto East Anti-Hate Mobilization and a number of community organizations, mosques and east end activists are planning an event in Dentonia Park to unite people and confront racism in the community.

(Photo of Mark Brown, speaking at labour-community rally on June 25, from Facebook)